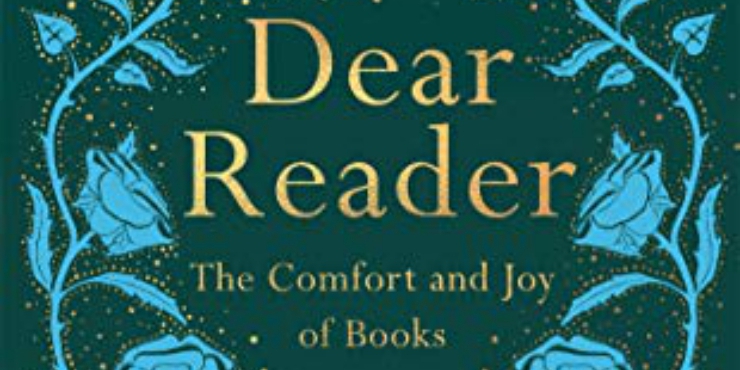 In Dear Reader, Cathy Rentzenbrink takes us through her life in books, discussing the stories that got her through school, college and university, the tragic loss of her brother and post-university directionlessness, working in bookshops, for a literacy programme and as a writer, and family life. Along the way, she recommends her favourite books on a number of themes.

Of course, as a prolific reader myself (though on nowhere near the same level as Rentzenbrink), I was always going to enjoy this book. It was a massive thrill to read so many things that made me think ‘yes!’. To name just three such things: her reliance on books to provide an escape in hard times; her suggestion that enjoying the Famous Five is an indication you’re going to love crime fiction later on; and her conviction that the best memoirs don’t just recount a life, but consider the nature of memory, truth and narrative.

I also agreed wholeheartedly that the sole purpose of adult literacy shouldn’t be so you can fill in forms and get a job, but so you can derive enjoyment from reading books and maybe even write your own story.

At the same time, Dear Reader reminded me that no two bookworms have read all the same books, or experienced the books they have in common in the same way. So while I was excited to share Rentzenbrink’s opinions on the wonderful What Was Lost by Catherine O’Flynn, as well as Elizabeth Jane Howard’s Cazalet Chronicles and Sue Townsend’s Adrian Mole diaries, I hadn’t read a large chunk of the books she discussed or recommended (but will definitely be adding quite a few of them to my TBR!). By the same token, while she loved A. S. Byatt’s Possession and Hanya Yanagihara’s A Little Life, I couldn’t get into the former and found the latter relentlessly depressing - the poor main character suffered one cruel misfortune after another.

I also enjoyed reading the author’s recollections of working in bookshops. As with Shaun Bythell’s Diary of a Bookseller and Confessions of a Bookseller, I found her experiences really interesting and funny/bemusing - but, having done my time in retail, I would never want that job myself! Rentzenbrink was suited to this work by her talkative nature - by contrast, I’m very socially awkward and find it much easier to express what I want to say about books online.

I loved watching Rentzenbrink progress from bookseller to manager to Quick Reads showrunner to writer, a journey she didn’t start until she was 27. It’s so nice to see someone become who they were always meant to be, and - proving everything she says about books bringing comfort and validation - it was life-affirming to read about someone else who didn’t find their niche until their late 20s!

Dear Reader made my heart sing with recognition and inspiration. It got me thinking about what titles I’d mention if I wrote a book in the same vein. I imagine I’d talk about constantly rereading Louise Rennison’s Georgia Nicolson series as a teenager (another influence on your reading experiences is your age - this set of books is very special to many of us who were teens in the early 2000s!). I’d discuss how I discovered post-colonial literature (such as Andrea Levy’s Small Island and Zadie Smith’s White Teeth) thanks to an A Level module, and only really reading fiction during the holidays as an undergraduate (notably Vikram Seth’s A Suitable Boy trilogy during my breaks at Sainsbury’s).

I’d go on to discuss getting back into reading during my post-university existential crisis, the many authors I discovered working in a charity shop and for a library service (too many to mention here, but this includes a lot of the crime authors whose books I pre-order as soon as they become available). I could mention the history books (Leonore Davidoff’s Thicker Than Water, Simon Szreter & Kate Fisher’s Sex Before the Sexual Revolution) and autobiographies (Antonia White, Elizabeth Goudge) I read for my PhD that left a lasting impression.

Unlike Rentzenbrink, I’m not much of a re-reader these days - not because I don’t want to, but because I’m too susceptible to the lure of exciting-looking books I haven’t read yet - but I would write about 2017, when I stuck to a New Year’s resolution to reread one book for every two new ones. I’d then bring things bang up to date with the five-star books I might not have read had I not decided to ease my lockdown boredom by taking part in more blog tours (Simon Edge’s Anyone for Edmund? and Celia Rees’ Miss Graham’s Cold War Cookbook to name just a couple!).

Dear Reader is published by Pan Macmillan on 17 September 2020.