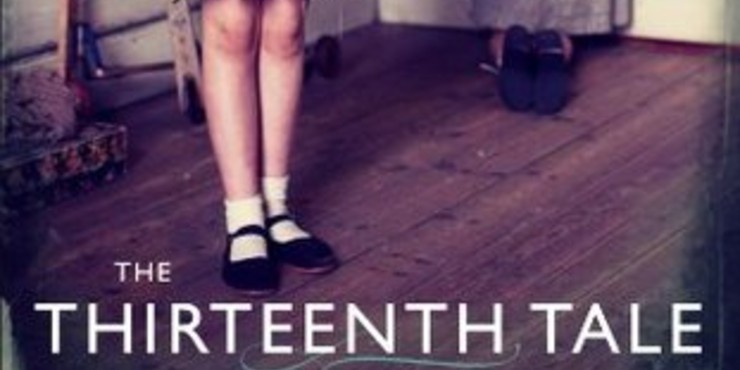 As I mentioned in my March 2019 round-up, I was inspired to try one of Diane Setterfield’s books by a very involved and fascinating interview she did for the website I work on. In The Thirteenth Tale, elderly author Vida Winter, who has spent her career obscuring her origins and spinning fanciful yarns for anyone who asks for her life story, engages young amateur biographer Margaret Lea to write her memoirs. Margaret’s life is books; she works in her father’s second-hand and rare bookshop, and reads constantly.

Vida’s - not her birth name - story is about a pair of twins, Adeline and Emmeline, born into a dysfunctional minor aristocratic family. They grew up half-wild and lost their home to fire when they were sixteen - by which time they had lost the few, emotionally distant relatives they had, as well as the two remaining stalwart household staff members who brought them up. But, of course, there’s more to it than that.

This central story has all the elements you could want in a gothic novel: a huge, creepy, increasingly dilapidated house, a strange, dysfunctional, isolated family, mysterious goings-on and disappearances, madness, secrets, scandal, and destruction. Vida is a fascinating character; strong and confident, even as she’s decided to finally tell the truth about herself in her dying days, she continues to exert control over the narrative despite Margaret’s questions. I was hooked from the start, when I found out Vida’s first book was a collection of fairy tale retellings - it sounded like something I’d want to read if it was a real book! And that’s without the detail that some rare first editions refer to ‘Thirteen Tales’, when the book contains just twelve…

The timelessness of the novel adds to its otherworldliness. Nobody mentions what year it is at any point (though we know it’s the twentieth century), or refers to anchoring events such as the World Wars. Margaret doesn’t refer to TV or the internet, although that might be because her number one interest is reading. I decided, based on their father’s death from the flu, that the twins were born around 1919. This also fitted nicely with their doctor and governess’s experiment with separating them, as this would have therefore taken place in the early 1930s, when there was a huge enthusiasm for making ‘scientific’ observations of children.

Quite aside from the engaging main story, though, I found myself really captivated by Margaret’s thoughts about storytelling and biography, as well as her own research into the places and characters that populated Vida’s childhood world. There were some passages near the beginning of the book that made my heart absolutely sing. On page 19, Margaret muses:

“People disappear when they die. Their voice, their laughter, the warmth of their breath. Their flesh. Eventually their bones. All living memory of them ceases. This is both dreadful and natural. Yet for some there is an exception in this annihilation. For in the books they write they continue to exist. We can rediscover them. Their humour, their tone of voice, their moods. Through the written word they can anger you or make you happy. They can comfort you. They can perplex you. They can alter you. All this, even though they are dead. Like flies in amber, like corpses frozen in ice, that which according to the laws of nature should pass away is, by the miracle of ink on paper, preserved. It is a kind of magic.”

I was equally struck when I came across similar sentiments in Susan Orlean’s The Library Book a couple of months ago. I just love the idea that books grant people immortality, and I’d love to be able to think that I’ve actually made some sort of lasting - in a constructive way - impact on the planet. I don’t know if I’ll realise that wish - digital preservation being as it is, will my thesis and blog still be accessible in even 20 years’ time? - but it’s a fitting dream for a book addict.

I could relate to Margaret’s excitement about caring for and dipping into books whose authors have been lost to time, thus bringing both book and author back to life. When I was writing my thesis, there was something thrilling about reserving autobiographies that had been relegated to the university library store, and hadn’t issued in decades. Using existing oral history interviews gave me similar feelings, as some of the recordings I used might not have been utilised by anyone else, or if they were, other historians would have brought different questions and focuses to them.

Margaret is also reluctant to write a biography for a living person, having previously only composed papers about nineteenth-century subjects. Part of my motivation for using existing oral history interviews was that it would have taken a lot of time and money to find and interview people who met my criteria myself. However, a less official reason I didn’t give in my Sources and Methods section was that I’m far too socially awkward to be a good oral history interviewer, so I could empathise with her there!

Setterfield’s use of Margaret as a storytelling device also raises questions about the ‘accuracy’ of the story she purveys. The reader is conscious throughout of Margaret’s technique of either transcribing ‘live’ what Vida tells her, or else writing down what she remembers after their session, as well as recording her own impressions of Vida’s story. This, of course, leaves her account open to the weaknesses of memory and interpretation.

Additionally, like Bart Van Es in his non-fiction book The Cut Out Girl, Margaret does some research of her own to bolster and verify Vida’s story, meaning that she comes to know more about some aspects of it (namely, the fate of the governess, who left suddenly, and a baby who was found on a doorstep the night of the fire) than Vida herself.

Besides this, Margaret is troubled by the fact she lost a twin soon after being born, causing dysfunction in her own family. This experience is what ultimately draws her to agree to write Vida’s memoirs and haunts her throughout the book, causing her to have a breakdown at one point. This could also have an effect on how she writes Vida’s story.

As mentioned above, Vida is very much in control of the order of the narrative, and it’s only right at the end that the pieces are allowed to fall into place; Margaret works it out herself, but Vida is pulling the strings. You might question why Vida, having decided to ‘tell the truth’, waits right until the end to really do so, but it wouldn’t be much of a story then! More pertinently, perhaps she’s pushed the ‘truth’ down so far inside herself that it’s become a huge thing psychologically. She therefore can’t spell it out herself, and has to get Margaret to ask her to confirm what happened rather than tell her directly.

The Thirteenth Tale is a solid story full of mysteries and surprises, but its commentary on storytelling captivated me even more. I’m looking forward to reading her other books!