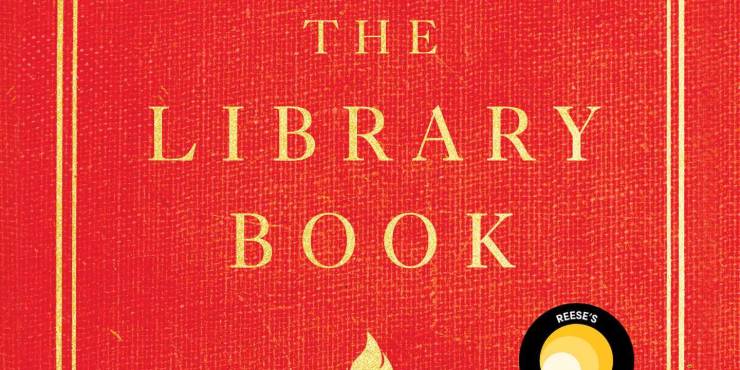 I’d been excited about reading The Library Book for ages. Libraries, history, and crime: how could I not want to read it? I’m happy to say it is even more than the sum of those three irresistible parts, and it did not disappoint.

The 1986 Los Angeles Central Library fire, its rehabilitation, and the only suspect, compulsive liar and fantasist Harry Peak, provide a fascinating starting point. Around these, Orlean spins out details about the Los Angeles library system, its staff past and present, the Central Library building, and ruminations on the purpose and value of libraries and their stock.

While the fire was undoubtedly a tragedy, I was enthralled by Orleans’ accounts of the building’s condition, how the fire took hold, the public reaction, the investigation and, of course, the story of Peak himself. A charismatic wannabe actor, Harry’s tall tales and ever-changing story about his involvement in the fire made for a complicated case for prosecutors who were desperate to find someone - anyone - they could hold accountable for the blaze. I found myself really interested in his life story, and how he ended up as an arson suspect.

Harry wasn’t the only person in the book I was interested in, though. Orlean describes the people who ran the library in its formative years in the late-nineteenth and early-twentieth centuries: an apparent succession of smart, forward-thinking women and eccentric men. The best-qualified woman head librarian in the library’s early years was, in fact, forced out of the job on account of her sex, to be replaced by the most eccentric man of the bunch.

I was most surprised to find out that around the turn of the century, libraries were a venue for games such as chess, and one of the women leaders around this time envisaged loaning out sports equipment (something the library service I work for started doing last year) - proof that libraries have never been about books and nothing more! Libraries have always been political, too, with head librarians holding varying views on what their patrons should be reading, what material should be available to them, and how old children should be to be allowed into the library.

I also found Orlean’s descriptions of the people who work for the LA library system today really interesting, though I may have felt a little envious of some of them! As a library web content editor with a PhD, I can attest that people who work in libraries come from a range of backgrounds. I nonetheless feel as though in another life where I had my shit together at any point in my 20s, I’d have trained as a proper ‘library person’, possibly a cataloguer or something else to do with processing stock.

Whenever I’ve done frontline work, I’ve particularly enjoyed the stock movement aspect - putting people’s reservations on the shelf for them, and finding books that have been ordered to other branches. There’s something I love about the idea of all that stock moving from location to location, as though the library system is a living organism - another alternative me who wasn’t terrified by the prospect of learning to drive would have delivered the items between branches!

Orlean is optimistic about the future of libraries; she describes the buzz in the Central Library, witnesses what it and other branches do for their communities, visits an amazing new library in Denmark, and is confident that eLibrary services supplement, rather than replace, physical libraries. I did feel that she has a better starting point for her optimism than me, though. I got the impression from The Library Book that libraries and librarians in the US are accorded more reverence than their British counterparts. Orlean describes how depressions and budget cuts have affected American libraries’ hours and stock, but she doesn’t talk about libraries being entirely lost to these.

Nearly 130 libraries closed in Britain in 2018 and others are barely kept open by well-meaning but untrained volunteers, and unmanned swipe-access systems that save on staff costs but shut out those who the face-to-face help and human contact offered by proper libraries. The county I live in is proposing to close 25 libraries and turn 19 over to communities to run. This book activated my excitement and enthusiasm about libraries, but the flipside of that is that the cuts now hurt even more than they already did.

The Library Book also features personal reflections from Orlean on the importance of libraries and books. I was particularly affected by her description of books (and, more widely, libraries) as a device for preserving voices and ideas, and affirming common human experiences across time. She talks about writing a book as a way of proclaiming ‘I was here’, and staving off the fear of being forgotten. This really spoke to me as I recently decided that the costs of writing a book based on my thesis outweighed any validation it might offer me. I decided to do a PhD because I was looking for meaning, and to do something meaningful with my time, and soon after achieving it, I’m already losing sight of the fact that I’ve made a contribution to knowledge that anyone with the internet can see, and wondering what else I can do to feel worthwhile. Maybe I should have at least had my thesis printed and bound…

The Library Book is like libraries themselves: it’s wide-ranging, full of life, and you get a hell of a lot out of it.