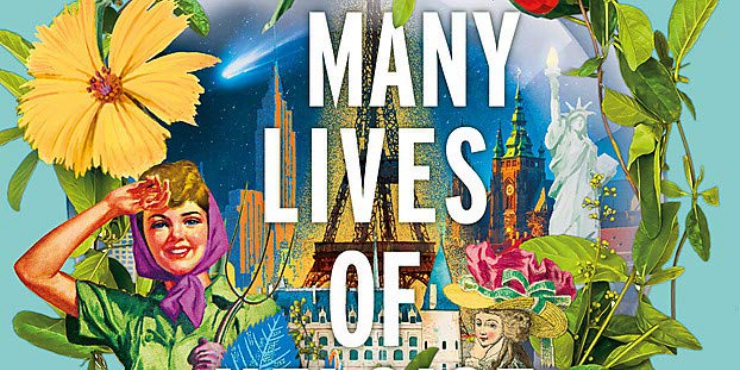 The Many Lives of Heloise Starchild mainly tells the story of three women fighting their circumstances in three different times and places: Marianne Muse, an orphan raised by nuns in late eighteenth/early nineteenth century France who seeks revenge for the rape, torture and beheading of her aristocratic mother; Katya Němcová, a Czechoslovakian collective dairy farm worker who devises an unusual way to cross the Morava River to Austria and freedom in 1979; and historian Halley Hašek, who wishes to travel to France, but in order to do so must prove herself to be a compliant citizen in the dystopia that is Britain in 2061.

What binds them - and a number of other women whose stories we also dip into - is not only that they’re part of the same direct maternal line, but that they inherit the memories of their mothers, grandmothers, great-grandmothers and so on, right the way back to Marianne’s mother, Heloise Montbelliard. In their dreams, they remember places and events they haven’t personally experienced, both good and wake-up-screaming bad. They also know from their memories that Heloise’s husband, Jean Sebastien Montbelliard, hid the family’s many valuables somewhere secret when they fled their grand Dijon home.

This book succeeds both as an exciting historical novel and a work of speculative fiction - in some ways, it reminded me of David Mitchell’s Cloud Atlas. Marianne and Katya’s stories are very interesting, well-researched and described; I got a really clear and vivid sense of what it was like to live in France during the Revolution and Czechoslovakia in the Soviet period. I also loved the historical details that cropped up in the snapshots of the more minor characters - for example, Esme Schmidt, who lives in Vienna in the early twentieth century, is sent for psychoanalysis by her father on account of her dreams.

In fact, the different reactions the people around the women have to the dreams - some are suspicious and disbelieving, others are curious and interested - are fascinating in themselves and send the women’s lives down different tracks. Women with more sympathetic families and partners are more able to talk about them, visit the places involved, and seek the treasure, whereas their less fortunate counterparts try to downplay and ignore them.

Ironmonger’s description of Britain in 40 years’ time, meanwhile, is terrifyingly plausible. Halley is constantly subject to a pair of hectoring simulacrums - a personal assistant and a doctor - who can get her ‘compliance credits’ docked if she disobeys their directives to exercise or go to medical appointments, and report her if she breaks the law. It’s against the law to be rude to an AI. It’s also difficult to obtain a travel visa to Europe because so many Britons want to escape there from the environmental disasters that have made some areas of the country uninhabitable.

There are sad, brutal, tragic and shocking events throughout this book - particularly in revolutionary France - but there’s also loads of love, selflessness, happiness and humour, which act as a balm and make it especially readable.

While our heroines have their own distinct personalities and concerns, they’re all daring and resourceful, and I had my heart in my mouth sometimes because I so wanted them to succeed in their individual missions! The treasure hunt is a clever and exciting touch, as the author doesn’t make it at all easy and it gives the women a common goal among the red threads - another of which is Halley’s Comet - that run through their stories.

The only complaint I have about this book is that I wish it were longer - I’d have loved to have seen the stories of the women other than Marianne, Katya and Halley expanded so that they were just as rich, detailed and absorbing. It could have been an epic.

The Many Lives of Heloise Starchild is a wonderful, inventive adventure that takes the reader from late eighteenth-century France to mid twenty-first century Britain and beyond.

The Many Lives of Heloise Starchild is published by Orion on 6 August 2020.