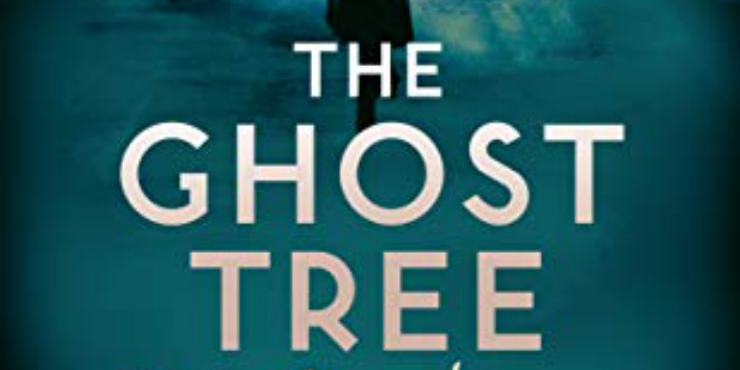 In M. R. C. Kasasian’s new novel, The Ghost Tree, we return to the world of Inspector Betty Church: Sackwater, Suffolk, in 1940. A dog has found a human jawbone, and it’s not long before more of the skeleton is uncovered. The evidence suggests that it’s Betty’s childhood friend, Etterly Utter, who disappeared when they were teenagers. The find leads Betty to take stock of her memories of the time, and re-examine the case as an adult detective.

I’ve been a big fan of Kasasian since I read the first Betty Church novel, The Suffolk Vampire, two years ago and went on to read everything else he’d written, so naturally I was very excited for The Ghost Tree, and it didn’t disappoint! As ever, he combines satisfying detective work, humour, and pathos evoked by the failings, feelings and dark side of humanity.

I loved the variety of techniques Betty and others use to unravel the mystery. I’m always fascinated when characters use bones to figure out information about the people they belonged to, so I loved the part where Betty’s dentist father makes deductions about the jawbone (and actually does something helpful, for once!). Betty and her team (well, mostly Betty, if we’re being fair…) make use of diary entries in the blank spaces of a Bible, historical changes in land use, questionable charge book entries, and ration book records. There’s also the good old-fashioned method of talking to people, of course - Betty finds out that a lot of things weren’t what they seemed at the time. Early on, in an extended flashback to Betty’s memory of Etterly’s disappearance, we’re even treated to a cameo from Sidney Grice and March Middleton (the stars of Kasasian’s Gower Street Detective novels), and it’s a joy to see Grice employ his customarily eccentric, yet ingenious, methods again.

Like the others in the series, this book is stuffed with laughs, from passing snorts to full-on chuckles. Betty’s colleagues are just as hapless, and her parents just as ridiculous, as ever, and Sidney Grice brings his usual unintentional deadpan humour. I particularly enjoyed a drawn-out misunderstanding about ‘dirty magazines’, Etterly’s preoccupation with food in her diary entries, and a character becoming increasingly weighed down by useless archaeological finds as a team digs to find more bones - you have to ‘be there’ by reading it, really!

Kasasian sets off this humour and adds gravity to the book with a number of serious events and observations. Etterly’s disappearance and the discovery of the skeleton naturally weigh on Betty’s mind, and she is determined to find out what happened to her friend. The book addresses heavy topics such as missed chances, wasted lives, forgiveness, the unfair treatment of travellers, the unnecessary cruelty of Approved Schools, and the protection of sex workers. The Second World War is always there in the background (Betty was injured by a bomb in the previous book), with characters helping to rescue men from Dunkirk and having to deal with loss among other things.

Kasasian is on top form with The Ghost Tree, seamlessly blending light and dark in a satisfying detective story where nothing is quite what it seems.