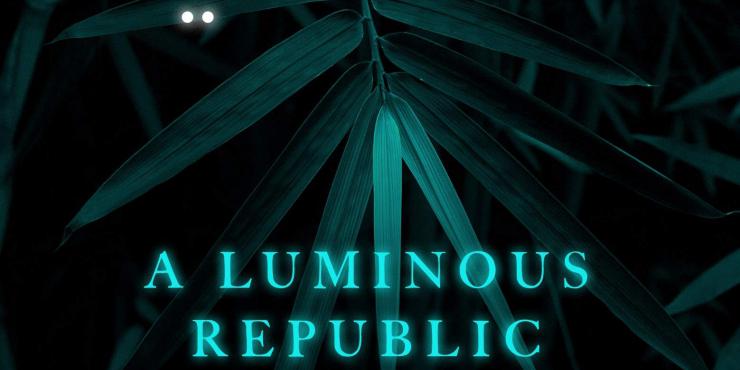 A Luminous Republic is an unnamed civil servant’s personal account of a strange period in San Cristóbal, Argentina, when a large group of feral children, aged 9-13, appear in the city. They beg and steal like other street children, but they have their own private language and games, and disappear into the jungle to sleep.

They evoke little more than impotent hand-wringing until the night they kill two adults in a supermarket. They promptly go to ground and the city launches a manhunt. We know from the beginning that 32 children end up dead, but we don’t find out how until the end of the story.

I found a lot to like in this short book. While there is a single narrator, he refers to other accounts of the tragedy, such as newspaper reports, sensationalist documentaries and books, and academic papers. These sources make the events he describes feel more ‘real’, and he adds to this effect by questioning their accuracy and criticising how they present ‘the facts’. He also refers to ideas and knowledge from philosophy, literature, linguistics and more, again situating the tale in the ‘real world’ as well as emphasising the importance and application of the humanities and social sciences.

The civil servant is also aware that, as many years have passed since the saga, his memories and interpretations of what happened will have altered and been re-shaped. There’s also the question of how complicit he feels in the entire business, and how this colours his telling of the story.

In this light, the story the narrator imparts has a mythological or fairy-tale quality, provoking fear in adults of what could happen if they let their children follow their nature, and curiosity in the city’s domestic children. I found it particularly interesting that, following the feral children’s disappearance, their suburban counterparts create ‘Bloody Mary’ type rituals to contact them, and claim to be able to hear them through the ground and communicate with them in their dreams. Some even run away to join them, increasing the moral panic and Pied Piper feel of the tale.

A big theme of the book is ‘childhood innocence’. The feral children have blown a hole right through the adults’ conviction that children are naturally innocent. Something the narrator mentions that really stuck with me is that the domestic children ‘perform innocence’ because they know it’s what their parents expect and want from them. It’s like the scales have fallen from his eyes about what children are like when adults aren’t around, or, as in this case, when they just don’t care how adults see them.

Even so, when he finally comes across the home the fugitives have made for themselves, he’s still shocked to see the word ‘whore’ scrawled in a sleeping alcove, and ruminates on it, considering that it ‘soiled the expression of love’ evident in the glass decorations, remnants of games, and signs of emotional closeness in the room.

I felt like he overthought this a bit - the children would have doubtless fallen out sometimes, and the writing could be the artefact of a long blown-over squabble. Additionally, although some of the feral children were clearly sexually active - at least one was pregnant - when I was a kid, we used to use ‘slut’, ‘tart’ and ‘whore’ as generic attacks rather than factual statements about the offending party. (Amusing memory of a childhood friend’s then-nine-year-old sister having written ‘[eight-year-old sister] is a HOAR’ on a bedroom wall when they were fighting!)

A Luminous Republic is an unusual, intelligent and thought-provoking read. It manages to feel simultaneously real and myth-like, and sticks with you long after the final page.

A Luminous Republic is published by Granta on 4 June 2020.