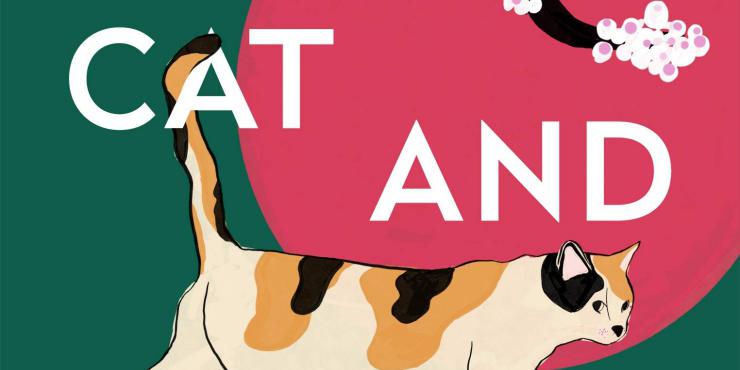 “In Tokyo - one of the world’s largest megacities - a stray cat is wending her way through the back alleys. And, with each detour, she brushes up against the seemingly disparate lives of the city-dwellers, connecting them in unexpected ways. But the city is changing. As it does, it pushes her to the margins where she chances upon a series of apparent strangers - from a homeless man squatting in an abandoned hotel, to a shut-in hermit afraid to leave his house, to a convenience store worker searching for love. The cat orbits Tokyo’s denizens, drawing them ever closer.

“In a series of spellbinding, interlocking narratives - with styles ranging from manga to footnotes - Nick Bradley has hewn a novel of interplay and estrangement; of survival and self-destruction; of the desire to belong and the need to escape.

“Formally inventive and slyly political, The Cat and The City is a lithe thrill-ride through the less-glimpsed streets of Tokyo.”

The Cat and The City is a strange and beguiling book - as the blurb indicates, it’s very multifaceted, and for that reason I found a lot to like, but also a few things I was less keen on. This review is an attempt to elucidate - not least, to myself! - what my thoughts are about it.

Of course, the first thing that drew me to this book was the fact it has a cat in it! She’s not as prominent as I expected her to be, but it was a pleasure to see her reappear throughout the stories. I really liked the mystery surrounding the cat: the stories suggest, variously, that she was brought into existence by a tattooist (Kentaro) inking an aerial view of the city onto a young woman named Naomi, that Naomi herself transforms into the cat at will, and that a similar cat stars in a children’s science fiction story with connections to some of the characters.

This brings me on to something else I enjoyed: that the author plays with genre and format. I particularly enjoyed the sci-fi interlude mentioned above, as well as the manga section (taking the time to seek out the cat in each illustration!), and the parts where we get an insight into the life and work of a private detective (Keita) who’s having a bit of an attack of conscience.

While the characters seem disparate at first, connections become apparent beyond the cat as they show up in one another’s stories, are affected by each other’s actions, and turn out to be relatives, friends or colleagues, and this is very cleverly done. The main arc - such as it is - is the reunion of a broken family: a homeless former alcoholic (Ichiro) who is particularly friendly with the cat, his lonely taxi driver brother (Taro), and the taxi driver’s daughter (Ryoko) who has moved to New York. But there are some more minor resolutions that really stayed with me: Keita’s redemption, Flo the lonely translator making a friend at work, and the agoraphobic hoarder (Naoya) who, through the cat, becomes friends with a troubled 11-year-old boy (Kensuke) and begins to recover as a result.

It was also nice to take an unsanitised, unsentimental tour of Tokyo. Sure, we see the typical vending machines, theme bars and soaplands, but we also get an insight into what it’s like to be homeless there, specifically at a time when the authorities are moving homeless people into prison-like facilities to ‘clean up’ ahead of the Olympics (of course, now we know the games don’t end up taking place in 2020, giving the novel an unintentional ‘parallel universe’ feel!). We meet people who feel lonely and hate the city and its workaholic way of life. We encounter right-wing attitudes, gang culture, sexual harassment and much more.

So far, so positive, but I think the reason I have mixed feelings about this book is that I didn’t like all the characters and stories. Like a lot of other reviewers, it’s rare for me to unequivocally love any short story collection, conventional or otherwise, because I end up having favourites that I enjoy or ‘get’ more than the others. Also, while some readers get pleasure from spending time with awful characters, I’m not really into it at all (as I realised after dragging myself through Iris Murdoch’s The Sea, The Sea…).

For that reason, I ended up impatiently speed-reading the bits about George and Mari, an unpleasant and tedious English-Japanese couple with communication issues. We’re also privy to the toxic thoughts of an assembly line worker as he visits a hostess bar with evil intentions. Then there’s deluded Sachiko, who not only behaves horribly towards lovely postman Shingo, but takes her anger out on the cat. While this moves the overall story on and sets the stage for Naoya and Kensuke, who treat the cat really kindly, I hated that bit. All life is very much here, and therefore some parts are more palatable than others.

I’ve been picking this reaction apart, because I’m certainly not someone who only reads nice books where nice things happen to nice people. It could be because I went into this book expecting it to be feel-good, so wasn’t prepared for the more lurid passages, or for terrible characters who we just leave behind (reflecting the cat moving on elsewhere) without seeing if they get any comeuppance or redemption. It could be the contrast, as other parts of this book are such a pleasure to read. Also, while I read a lot of crime novels and hardly ever flinch, animal cruelty is my kryptonite.

So, very mixed feelings then! While I wouldn’t want to put anyone off The Cat and The City as there are some things I really like about it, I would advise you not to go in expecting a consistently feel-good read that satisfactorily ties up all its trailing ends.

The Cat and The City is published by Atlantic Books on 4 June 2020.