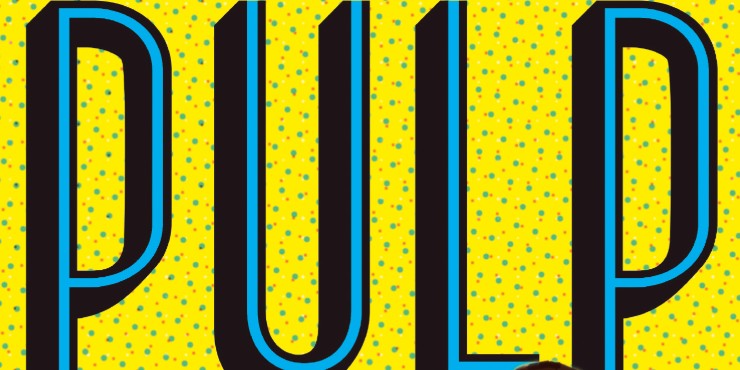 Pulp, by Robin Talley, switches between two gay teenage narratives. Janet Jones is a budding lesbian pulp fiction writer discovering her sexuality against the dangerous background of McCarthyism in 1950s Washington, D. C., and Abby Zimet is a gifted student who becomes obsessed with Janet’s book, Women of the Twilight Realm, written under the name of Marian Love, in the same city in the present day. Abby starts writing her own creative contribution to the genre for her senior project, and goes on a quest to find out more about the reportedly dead author, while trying to shut out the hurt of her parents’ crumbling marriage and her own recent heartbreak.

I was drawn to Pulp by its use of literature and stories, and I was not disappointed in this respect. I love a good ‘story within a story’; a couple of brilliant examples of this are Elly Griffiths’ creation of passages of a Victorian gothic novel for The Stranger Diaries, and Diane Setterfield’s references to stories written by fictional author Vida Winter in The Thirteenth Tale. By including passages from Janet’s novel, Talley not only makes Janet feel more ‘real’ as an author, but brings to life the tropes of the genre that Abby, and the reader, learn about in Pulp.

Janet is just the kind of character YA was made for: she discovers who she loves, what she wants to do for a living, takes risks, finds ‘her people’, and develops confidence, self-knowledge, and conviction over the course of the novel. I had only rudimentary knowledge about what life was like for queer people in 1950s America, and it was eye-opening to find out how people were treated if there was a mere rumour that they were gay, and how secretive gay couples had to be. It testified to Janet’s strength of character that she persisted in following her dreams, and meant I was cheering her on even more.

Apart from the parts where she was doing detective work on the fate of Marian Love/Janet Jones, Abby’s chapters were rather dull by comparison. I do remember being just like her when I was 17: mopey, unmotivated, hung up on some ex instead of being able to see what a great position I was in (Abby, you get to write a story for your senior project and you’re going to college soon and it’s going to be amazing!). However, it doesn’t make for the most interesting reading, and it was only towards the end when Abby developed a bit more perspective and get-up-and-go that I started to warm to her.

The D. C. Abby and her friends live in seems like queer utopia compared to Janet’s D. C. - but it’s a little too utopian. Everyone in the group is LGBT+, and it feels like a missed opportunity that they are all more or less accepted by their families and the wider world. When they go on peaceful protests, which seems to be their main pastime outside of school and extra-curricular activities, homophobia seems to be more of an abstract concept than something that has ever affected them personally.

The protests always go without a hitch, too; I feel that if someone had engaged in some mild activist vandalism, had an encounter with the police, or punched a Nazi, it would have added some much-needed drama and liveliness to Abby’s narrative. Abby and her friends are incredibly studious and earnest and firmly set on the path from magnet school to prestigious college; Janet’s tale of questioning and rebellion was far more exciting to read.

It was hard to decide how many stars to give Pulp; if it had been Janet’s story alone, I would have given it at least 4 stars; if it had just been Abby’s, I’m not sure if I’d have been able to finish it. I went with 3.5, focussing on the positives: Janet’s character and story, the 1950s setting she overcame, Abby’s detective work, and the role of literature in both girls’ lives.