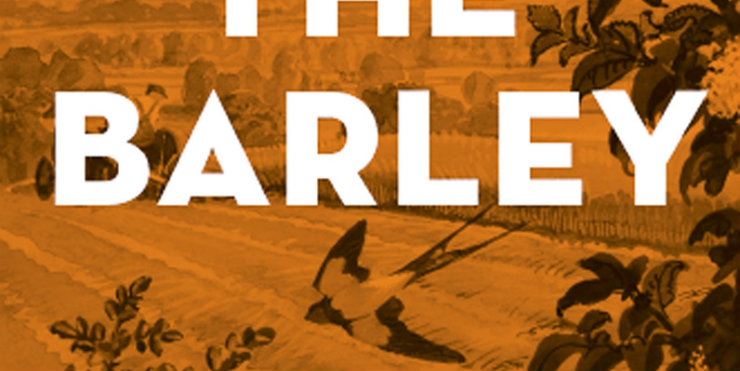 All Among the Barley, set in Suffolk in the late 1930s, is the story of a critical year in the life of Edie Mather, who has just left school at the age of 14 and now helps on her family’s farm. Her love of books sets her apart from her family and peers, and she has vague hopes of ‘being someone’. Nonetheless, she loves where she lives and initially assumes her life will continue much as it always has, despite the community’s recent experiences of the Depression and poor harvests.

We know that Edie’s going to end up away from the farm, and estranged from her family, right from the beginning of the book, but it’s not until the end that we find out why. Is it related to the increasingly strange behaviour and ideas she develops over the course of the year? Or is it to do with the arrival of glamorous, unconventional writer Constance FitzAllen, ostensibly come to document dying rural traditions for a national magazine? Or a mixture of both?

I found Edie’s experiences of growing up awkward incredibly relatable, even though my own experiences took place several decades after the story is set. Like her, I was bookish, unpretty, and found it hard to relate to other people of my own age, no matter how hard I tried to make overtures (although, unlike Edie, after a while I went ‘sod it’ and gave up wanting to fit in!). I could also identify with her feeling that as she was clever, she ought to be doing something ‘different’ with her life without really knowing what, or how to go about it.

Unlike mine, though, Edie’s options are extremely limited by her era and social position, and that ties All Among the Barley to its time and place particularly effectively. The obvious limitation, already mentioned, is that Edie has had to leave school at 14, and is required as an extra pair of hands on the farm. Another is that the only kind of job anyone can realistically suggest to her involves teaching children, which she knows she definitely doesn’t want to do. Constance attempts to broaden her outlook with talk of London, but for Edie, who has only ever lived in the countryside among people she knows, this is an unimaginable future.

The setting of the book also heavily influences Edie’s increasing preoccupation with witchcraft. I loved Harrison’s references to characters finding an old witch-bottle in their home, as well as her use of the circular symbols, meant to ward off early modern witches, that can be found carved into old houses all over Suffolk. These symbols particularly capture Edie’s imagination, and like some girls of her age accused of witchcraft centuries earlier, believing herself to be a witch makes her feel more powerful against growing uncertainty. The time that the story takes place also determines how Edie ends up spending the rest of her life - but I can’t say more than that!

A theme that really stood out for me was that of people trying to impose their own narratives and ideas on others. While there are many things about herself that Edie is trying to establish, she knows for definite that she doesn’t want to work with children, or go to dances. However - out of kindness, as they want her to make something of herself and be happy - her mother and former teacher try to convince her that she actually does want these things, or will change her mind. Edie herself makes up stories - for example, that her mother and grandmother are witches and she has inherited this from them - to try and make sense of her family’s behaviour to her place in the world.

Constance, meanwhile, presents an idealised, rustic version of the countryside in her articles, even though the people she speaks to keep telling her that they’re not opposed to progress, welcome changes that make their lives easier, and don’t retain all the traditional methods, customs, or beliefs. She ultimately uses her narrative about them to her own ends in the charged political atmosphere of the late 1930s, even using Edie’s image to push an agenda Edie doesn’t believe in.

All Among the Barley manages to be both timeless and time-specific. While Edie’s experiences as an awkward, bookish teenage girl trying to figure out who she is and where she fits into the world are universal, the place and time she inhabits is crucial to how her instability manifests itself and how things turn out for her.