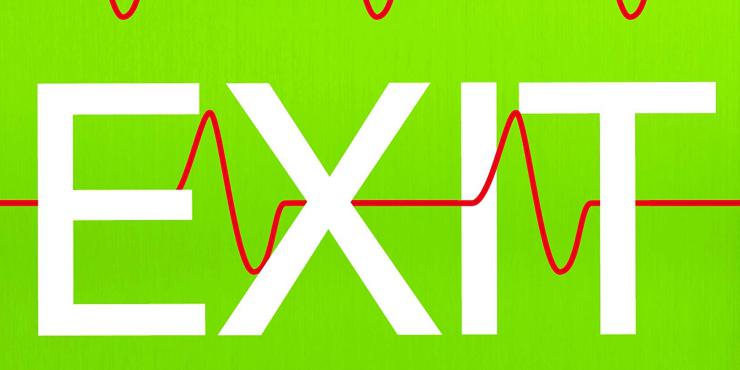 Felix Pink, the elderly, unremarkable main character of Belinda Bauer’s new crime novel, Exit, is an ‘Exiteer’. It’s his job to sit with terminally ill people who have decided to end their lives, as they draw their final breaths. They’ve let their families know of their intentions, they’ve signed a waiver, and the Exiteers don’t physically assist their deaths in any way. What could possibly go wrong? Quite a lot, as it turns out…

Felix is horrified when things go massively awry on a job - through absolutely no fault of his own - and he gets caught up in a murder investigation. Being a well-intentioned and decent man, he endeavours to work out what happened, put things right, and protect his colleagues - with hilarious, but also touching consequences.

I absolutely loved Exit. I devoured it over the course of 24 hours, during which time I snorted with laughter on several occasions at Bauer’s trademark observational humour and the escalating farce, changed my working theories of who pulled the strings behind Felix’s ‘mistake’ a number of times, and felt really moved as Felix bloomed as a character, having previously been on a kind of joyless autopilot following the deaths of his wife and son.

As a police procedural, Exit is top notch. Bauer leads you a merry dance with frequent red herrings and twists, and it’s great fun to watch the police try to untangle what happened, especially as Felix’s involvement throws some brilliant spanners in the works. It’s easy to get a keen sense of the trials and tribulations of working out of Bideford police station, with its sigh-inducing patrons - whether they’re reporting or accused of crimes - and the recalcitrant vending machine that’s almost a character in itself.

Bauer brings the various officers working on the case to vivid life with their quirks, backstories and interactions with one another, whether they’re main characters such as Calvin Bridge - previously seen in The Facts of Life and Death - who does much of the legwork, or bit-part players like Tony Coral, whose wife makes notoriously bad fruitcake.

This is also true of the wider cast - there are a quite a few characters, but none of them feel two-dimensional, helping you instantly remember who they are when they unexpectedly pop up and/or take on a larger role later on. Everyone Bauer introduces is there for a reason beyond showcasing her excellent, often highly comical descriptions of people, even if their significance isn’t at all obvious at first.

Characters aren’t the only things Bauer brings to tangible, sparkling life. Like Transworld stablemates Kate Atkinson and Lissa Evans, she has a talent for making the most everyday situations and mundane objects leap off the page, infusing them with magic and humour. To name just a couple of examples, I loved the way she wrote about a minor character’s gnome collection, and Felix’s beige coat. From the way she described it, with keenly-observed reference to its serviceability and ubiquity among men of a certain age, I knew exactly the coat she meant!

Exit is amazing: I laughed, I was moved, and I was pleasantly bamboozled as Bauer continually upped the ante with the twists, turns and farce.

Exit is published by Transworld on 21 January 2021.