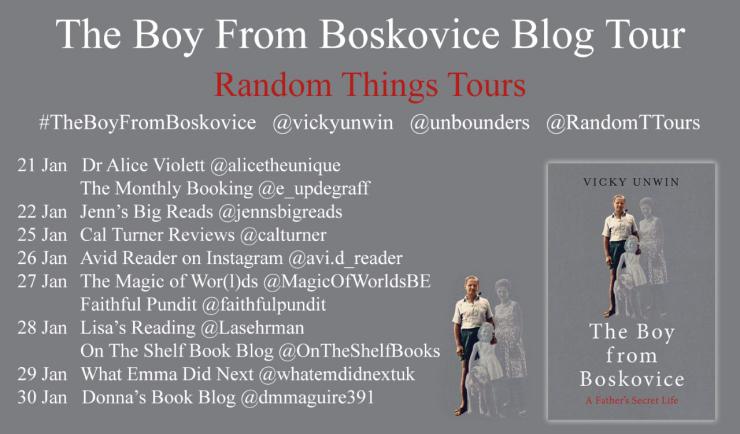 “What makes a good man bad? Nature or nurture? This is the extraordinary story of the author’s father, a Holocaust survivor who left a trail of pain and secrets in his wake.

“Vicky Unwin had always known her father – an erstwhile intelligence officer and respected United Nations diplomat – was Czech, but it was not until a stranger turned up on her doorstep that she discovered he was also Jewish.

“So began a quest to discover the truth about his past – one that perhaps would help answer the niggling doubts she had always had about her ‘perfect’ dad. Finally persuading him to allow her to open a closely-guarded cache of family books and papers, Vicky discovered the identity of her grandfather: the tormented author and diplomat Hermann Ungar, hugely controversial both in life and in death, who was a protégé and possible lover of Thomas Mann, and a friend of Berthold Brecht and Stefan Zweig. How much of her father’s child was Vicky – and how much of his father’s child was he?

“As Vicky worked to uncover deeply-buried family secrets, she would find herself slowly unpicking the lingering power of ‘survivor guilt’ on the generations that followed the Holocaust, and would learn, via a deathbed confession, of the existence of a previously unknown sister.

“Together, the sisters attempt to come to terms with what had made their father into the deeply flawed, complex, yet charismatic man he had always been, journeying together through grief and heartache towards forgiveness.” 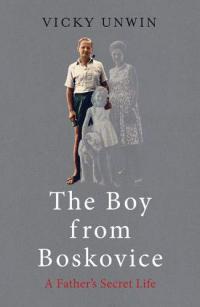 In The Boy from Boskovice, Vicky Unwin tells us the story of her late father, Tom, starting in nineteenth-century Moravia with details about Tom’s own father and grandfather, Hermann and Emil Ungar, and the family and friends who played important roles in their lives, then following Tom from birth to death alongside the people who were part of his life, including herself.

From a purely historical point of view, this book is fascinating: you get to find out what life was like for Emil and Hermann as Jews in the Austro-Hungarian empire in the late-nineteenth and early-twentieth centuries; watch Tom and his mother and brothers escape to Britain from the Nazis in the nick of time, then assimilate as much as possible in order to avoid negative attention; read about the work Tom did during and after the Second World War (building on what I learned about Germany in the aftermath of WWII in Celia Rees’ Miss Graham’s Cold War Cookbook); and discover how Tom, his wife Sheila, and later Unwin herself lived as his colonial and diplomatic work took them to different countries. I found it all so interesting!

But throughout the book, you’re also aware that Tom wasn’t the idealistic, convivial character he presented himself to be at work. Unwin details his continual mistreatment of herself, her mother, and other people throughout his life by writing about personal events (such as Tom denying his Jewishness, keeping the family in the dark about a half-sister born before his marriage to Sheila, and being violent towards Sheila) and including excerpts from letters (an incredibly rich resource - Tom and Sheila were prolific letter-writers who kept the bulk of their missives) where Tom not only laid bare his narcissistic and cruel nature, but admitted to and revelled in it.

It’s a credit to Unwin that she is able to write about Tom and the damage he inflicted upon her and others in such a measured, matter-of-fact way. While it’s clear how much he hurt her right up to the end of his life, she has achieved enough distance from the man and events she describes to consider why he shut the door on his Jewish and Czech identities so firmly and fashioned himself to be ‘more British than the British’, and why he was so hurtful and unsympathetic towards his loved ones. Was it nature (Tom’s own mother and father shared some of his unpalatable traits), nurture (the trauma of escaping the Nazis while leaving so many behind), or a mixture of both?

My main takeaway from The Boy from Boskovice is that no biography is about one person: we are all shaped by others (alongside our cultural and historical context), and our words and actions affect others in turn. With unflinching honesty and a self-awareness sorely lacked by her father, Unwin turns to herself and her own children, asking to what extent she has inherited Tom’s characteristics, and how this might have impacted her own parenting.

I was heartbroken to read about the death of Unwin’s daughter, Louise, to a ketamine overdose at the age of 21. As well as being a tragic loss of someone who sounded so kind and full of potential, Tom was so unfeeling about it, and Unwin wonders whether Louise’s genes and family experiences might have laid the groundwork long before the event. It lifted my heart, though, that Unwin was able to find solace in Bonnie, the half-sister she never knew she had.

The Boy from Boskovice is a fascinating, moving and devastating biography that powerfully demonstrates how no man is an island. It shows the impossibility of fully knowing someone, the healing properties of time and rational consideration of why people behave the way they do, and the huge value of letters as historical evidence.