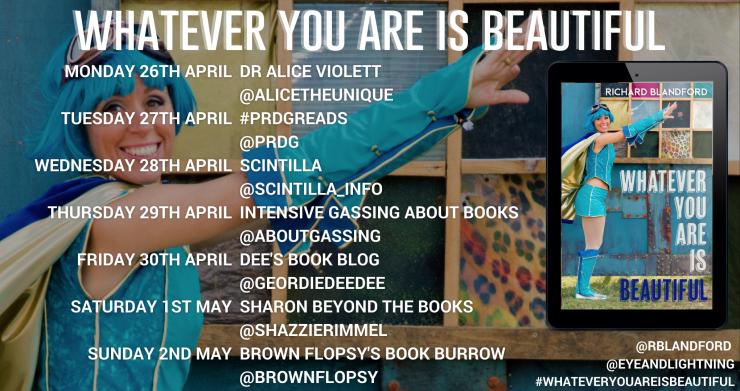 “A mysterious illness, called HEROS, is sweeping America. It changes those afflicted, stage by stage, into super-powered costumed crimefighters.

“Charlie was once one of Britain’s favourite TV personalities, known for sneering at the weirder members of society in his cutting-edge documentaries. But now, after a battle with cocaine addiction, he wants to go straight and show his caring side. A programme about this bizarre new disease may be a chance to get his career back on track.

“As he films and interviews a number of people with HEROS, or rosies, as they call themselves, Charlie gets close to many of them, perhaps too close, and starts to question his role as a neutral observer. This may well be a career-changing experience, but not in the way he imagined.

“Whatever You Are is Beautiful is a dark comedy, which celebrates difference and explores the immense human capacity for intolerance. It is both cautionary and joyful in equal measure.” 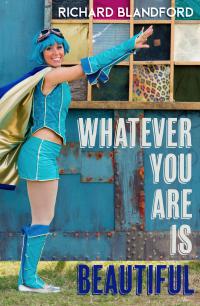 I found Whatever You Are is Beautiful, by Richard Blandford, a really engaging and rich read. So much thought has gone into all the different aspects of living with HEROS, an illness that initially causes strange things to happen to one of the sufferer’s body parts. As the illness progresses, they come to believe they are superheroes, acquiring bizarre costumes and being compelled to fight crime - any crime.

There is an entertainingly wide range of different forms the illness can take. Some forms are inconvenient and useless, while others are talents that bring their owners fame and fortune. We also see how various sufferers and their families react to the condition - often with fear and sadness, as it is only a matter of time before the ‘rosie’ becomes lost to their delusion.

Blandford’s exploration of the social, cultural and political aspects of HEROS is also very comprehensive. Some rosies campaign for integration and accessibility, while others prefer to segregate themselves from the rest of the population. Rosies’ compulsions to fight crime makes things harder for the police force, who do not treat them with sympathy or understanding. We also meet people who aren’t rosies, but take their cause on as their own, people who want to be rosies and cosplay as them, and rosies whose compulsions lead them to commit, rather than fight, crime.

The story is told by TV presenter Charlie, who is making a documentary about rosies. Charlie has his issues - he’s a former cocaine addict, develops a sexual fixation with rosies, and gets a little too close to some of his subjects - but there’s just enough good in him for you to accept his flaws and like him as a narrator.

While Charlie meets loads of different rosies, he becomes particularly involved with the stories of Bo (aka The Trout) and his young family, and young Alex, whose hands randomly lose their solidity. Their stories are very moving, as we see Bo’s wife and children try to come to terms with the prospect of losing him, while Alex struggles to come to terms with her condition and make meaning from it, while experiencing hostility from her family.

Whatever You Are is Beautiful is rich, imaginative and entertaining.