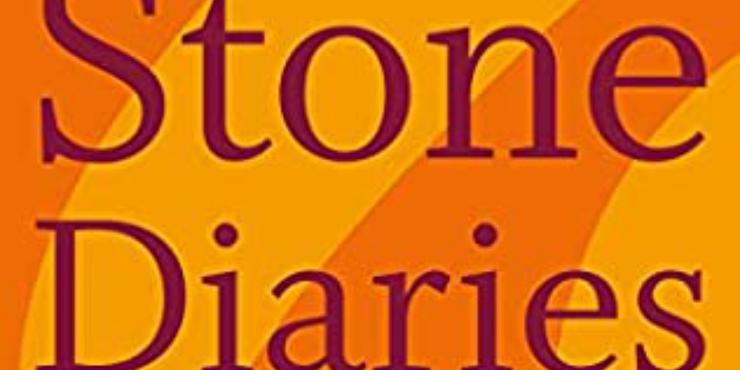 “Widely regarded as a modern classic, The Stone Diaries is the story of one woman’s life; that of Daisy Goodwill Flett, a seemingly ordinary woman born in Canada in 1905. Beautifully written and deeply compassionate, it follows Daisy’s life through marriage, widowhood, motherhood, and old age, as she charts her own path alongside that of an unsettled century.

“A subtle but affective portrait of an everywoman reflecting on an unconventional life, this multi-award-winning story deals with everyday issues of existence with an extraordinary vibrancy and irresistible flair.” 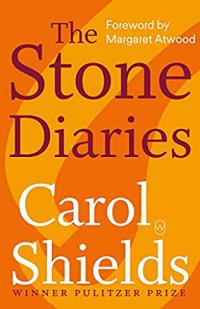 The Stone Diaries, by the late Carol Shields, is a stunning novel that shows how the quietest people have the richest inner lives. Shields draws profound, witty observations and meaning from the most prosaic of scenes, and writes generously and gorgeously about the minutiae of everyday existence. I feel as though I could reread this book several times and get something different from it on each occasion.

The main character, Daisy Goodwill Flett, lives what looks like an ordinary life for a middle-class western woman of her time: going to school and a ladies’ college, getting married and having children, only spending a short period of time in paid work. She comes across as rather passive (even when she makes an active decision to travel in her 30s, her refrain is “please, please let something happen”), virtually drifting into marriage, motherhood, and a stint as a gardening column writer.

However, by writing Daisy’s life story and bringing sparkle to everyday scenes, Stone shows it to be less than ordinary and well worth the telling. Daisy’s mother, Mercy Stone, dies in childbirth, having not even realised she was pregnant. Present at the birth is neighbour Clarentine Flett, who, alongside her grown-up son Barker, raises Daisy for 11 years, having left her marriage ostensibly because her parsimonious husband would not grant her a small sum for dental treatment. Daisy’s father, Cuyler Goodwill, builds a limestone monument at his late wife’s grave and a pyramid in his back garden, develops an enthusiasm for public speaking, and marries Italian Maria, whom nobody can understand. Daisy goes on to marry Barker, but it’s not her first marriage.

Daisy takes the part of an omnipotent narrator from beyond the grave, mostly using the third person to describe not only her own birth, death, and much in-between, but also the stories of her parents and the Fletts (I knew I’d enjoy this book as soon as I saw the big family tree in the front!). This approach is similar to that of Kate Atkinson’s Behind the Scenes at the Museum, which is one of my favourite books.

By virtue of her omnipotence, Daisy not only conveys her thoughts, but also what other people think her thoughts are. These are often mistaken, whether they’re to do with her first marriage, the reasons she goes through a depressive period, or her critical musings on bed jackets as a bedridden old woman. These supporting characters, some more prominent than others, are all brilliantly-drawn and accumulate great depth as we’re privy to their thoughts and see them develop over time.

Time itself is also something Shields approaches inventively in this novel. She wisely remarks upon how we go through years where nothing much happens or changes, but are full of individual days with good and bad elements, then wonder at how such an expanse of time can yet be summed up in a sentence. She plays with the format and portrays a whole period of Daisy’s life through letters to her from others. After Daisy’s death, she includes old lists and recipes that are simultaneously worthless and poignant.

The Stone Diaries is a rich, wise and darkly humorous novel that shows how the quietest people have the richest inner lives. I had never heard of Carol Shields before this tour and will definitely be reading more of her books! 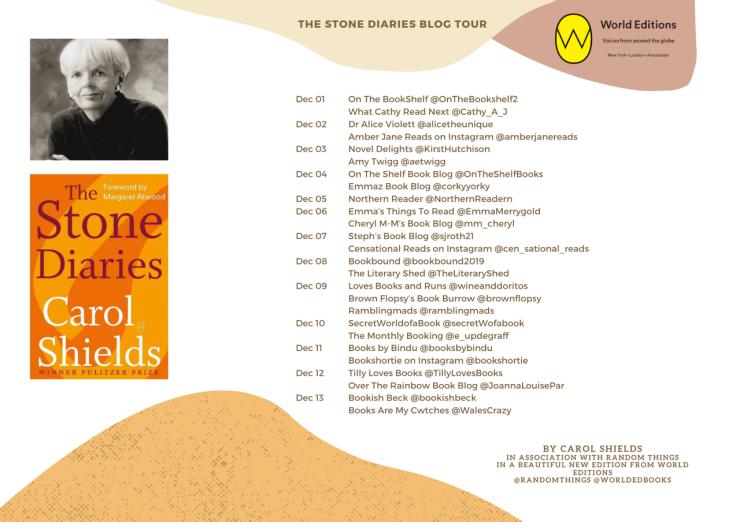