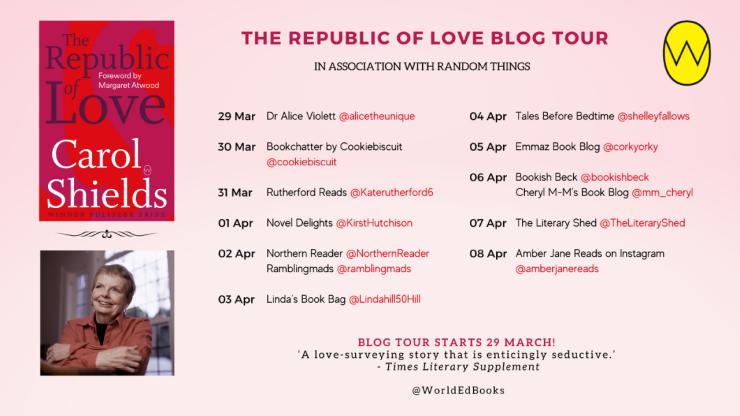 “A celebration of love in its many guises, The Republic of Love recounts the heartfelt tale of two of life’s unlucky lovers: Fay, a folklorist whose passion for mermaids has kept her from focusing on any one man; and, right across the street, Tom, a popular radio talk-show host who’s been through three marriages and divorces in his search for true happiness.

“Touching and ironic, The Republic of Love flies the flag for ordinary love between ordinary people.” 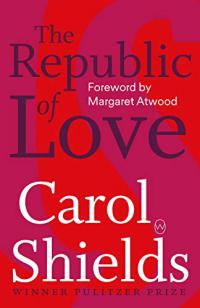 Carol Shields has been my ‘new favourite author’ since I read The Stone Diaries for a blog tour a few months back, so I was very excited to join the tour for The Republic of Love! It’s been another five-star read for me.

Like The Stone Diaries, this novel is one where ordinary people’s lives chug along with only the very occasional big dramatic event, but it’s in Shields’ observations of the everyday that the magic lies. I couldn’t help but be carried along by her enchanting and witty telling of Tom and Fay’s stories.

The Republic of Love is an unusual love story in that the couple don’t even meet until about halfway through the book, despite living on opposite sides of the street and having social circles that overlap in various, sometimes quite quirky, ways. This means we have lots of time to get to know them as individuals.

I enjoyed following Fay as she researched, talked and wrote about mermaids, and Tom as he connected with all sorts of people on his late-night radio show. We learn about their previous entanglements, including Tom’s three failed marriages, and Shields imparts wisdom about how the passage of time smooths over hurts and passions that at one point felt like the be-all and end-all.

Of the pairing, I think I preferred Tom’s character because he’s very amiable, doesn’t hold grudges, and, for the most part, hasn’t let his unfortunate experiences in love turn him bitter. While Fay is endearing, I did sometimes get frustrated by her lack of imagination and tolerance when it comes to relationships that differ from her own preferred set-up.

Shields’ ruminative, meandering writing style means we get to meet a large supporting cast of characters Fay and Tom know. Through these, Shields portrays a huge range of relationship types - although, as this book was written in the early 90s, there is a lack of representation of non-heterosexual, non-cis and non-white couples that you wouldn’t get if someone wrote a book along the same lines as The Republic of Love today.

These include the relationships of Fay’s parents, who took the traditional route and have been devoted to one another since their early twenties; Fay’s godmother, who finally marries her long-term live-out partner when he’s on his deathbed; and Tom’s mother, who found her life partner in middle age once she was finished with child-rearing as a single parent. Shields conveys the message that all are equally valid, and it’s never too late to get the life you want.

The main takeaways I got from The Republic of Love were: no kind of relationship - showy or low-key, long or short, solemnised or otherwise, co-habiting or living apart - is ‘superior’ to another; no relationship is perfect, and making allowances and compromises is essential; you can’t know the dynamics of anyone else’s relationship, or how two people rub along together day after day; and rough patches and rifts do happen and don’t have to spell the end if you still love one another and are willing to put the work in.

The Republic of Love is richly peopled, wonderfully meandering and sharply observed.