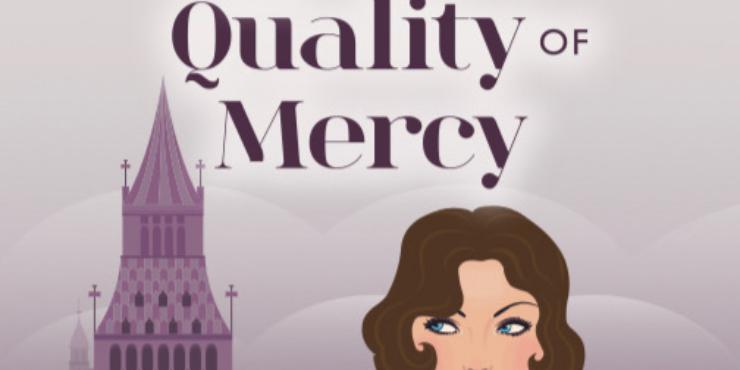 “After years spent away, Lady Evelyn is at long last back in her home city of London and she has returned with a rather controversial plan. The Carlisle Detective Agency is born, and it does not take long for the bodies… ahem, cases, to start piling up. With her friend and assistant Hugh, Evelyn embarks on the quest to solve the crimes.

“Yet the London she encounters is not the London of her coddled youth, and she is forced to learn that there is more to discover than the identity of a murderer. It isn’t only her city which reveals it is not what she always believed it to be, but the people she encounters as well. Secrets are revealed that have her thinking twice about everything she thought she knew about the society in which she grew up.

“Evelyn’s love for her hard-won independence confronts her with yet another mystery, whether she is ready or willing to give up any of it for marriage. And then there is the arrival of rather a familiar face in London, one Daniel is none to pleased to see. Evelyn must find not one but two murderers, as well as make a decision that could determine her future. From the mansions of Mayfair to the dark alleys of Whitechapel, can Evelyn catch the killers before another life is taken?” 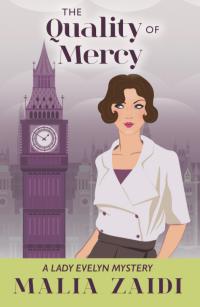 The Quality of Mercy certainly isn’t your run-of-the-mill cosy crime novel. Its high page-count gives the author (and therefore Evelyn!) the opportunity to really explore what life was like for the haves and have-nots of London in the 1920s.

Through two very different cases - the deaths of an upper-class, tyrannical patriarch, and a working-class WWI veteran up to his ears in gambling debts - Evelyn discovers both the secrets and unhappiness that can fester in even the most privileged of families, and the reality of life for men, women and children in the capital’s poorest districts. I really enjoyed this juxtaposition, as well as the mysteries themselves: clues, gossip and facts come to light at a measured pace and I didn’t guess the outcome of either case!

I loved Evelyn as a character; she fully acknowledges her privilege, is genuinely moved by the situations she encounters when she visits the East End, and is kind, sympathetic and generous towards those who are worse off than herself. She does a lot of soul-searching as she despairs for the future of Whitechapel’s children as well as that of unemployed, traumatised ex-soldiers like the deceased Terry West. In fact, the legacy of the Great War is a theme that runs throughout the book, affecting characters of all social classes, including Evelyn’s fiancé, Daniel, her super-competent assistant, Hugh, and her friendly older neighbour, Dulcie.

There’s also a sense that the war has been a real watershed moment for Evelyn and many others of her class. Evelyn fights against social expectations by buying her own apartment, setting up her detective agency, planning to keep both once she’s married, and consciously questioning whether she wants to have children. Her refusal to conform leads to some great scenes with her hilariously snobbish and blunt Aunt Agnes. Other characters anger their parents by failing to share their values and interests, causing tensions and even suspicions to arise.

However, Evelyn’s social position also gives The Quality of Mercy a degree of escapism. We get to follow her to fancy restaurants, garden parties, afternoon teas and picnics, go on a fact-finding mission in the disreputable but glamorous world of the theatre, and read a bit about her previous travels abroad (I’ll have to read the other Lady Evelyn novels to find out more about them!). Her home, car, clothes and the food she eats all sound absolutely heavenly - you really can’t blame her for wanting to retain her independence. 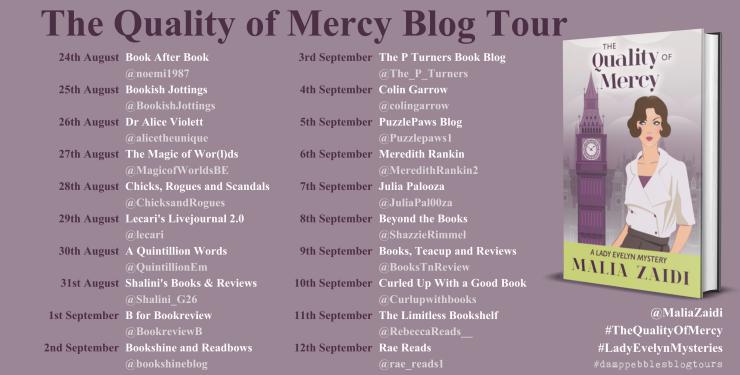