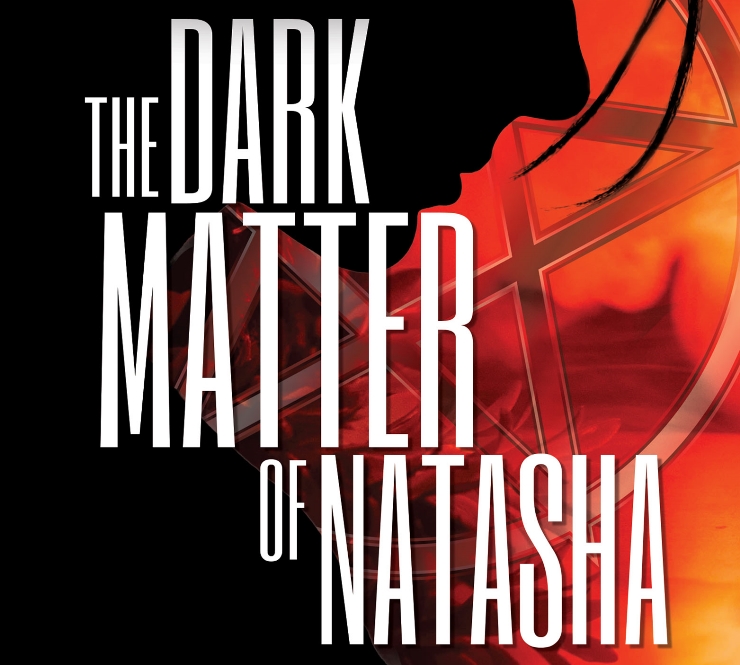 “Natasha stalks the quiet streets of dead-end Lunar Bay like doom in a denim jacket. She’s a grim reminder that some teenagers can never escape the ever-tightening noose of their lives. Burned out and benumbed by a traumatic past, dogged by scurrilous small-town gossip, she finds solace in drugs, sex and Slayer.

“What horrors have her flat eyes witnessed? And how far will she go in pursuit of the one tiny spark of hope that still flickers in her haunted heart?

“When a naïve transplant crosses her path, he’s drawn into shadow and doubt. With his girlfriend ghosting him, Natasha’s fresh introduction to her half-lit world is darkly appealing. Now faced with confusing quandaries — connection or convenience, relationship or exploitation — can he help any of the women in his life? Or is he just helping himself?

“The untold tragedies of Natasha’s lonely life may be more than he can handle. And in a town whose history is littered with dead girls, there may be no happy ending for anyone. 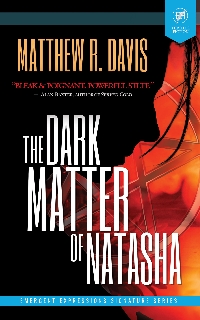 In The Dark Matter of Natasha, by Matthew R. Davis, an unnamed narrator looks back on a formative period of his life, when he was a callow teenager grappling with heavy topics for the first time. Living and working at a caravan park with his mum in a one-horse town, his life of shallow school friendships and Mario Kart changes forever when he forms a brief alliance with Natasha, a disturbed and nihilistic outcast.

This is a short, brutal novella that I read in two sittings. The author uses language to brilliant effect, bringing the setting of Lunar Bay to stark, hopeless life and rendering it and its inhabitants strangely beautiful, compelling me to keep reading. While the narrator’s voice can be immature, crude, and borderline offensive, it struck me as authentic for a teenage boy in an early/mid 90s context.

It was clear to me that the narrator cares for the people around him, and feels bad when he does the wrong thing. However, because of his age, he has limited knowledge of, and clarity on, the right course of action, and is clumsy in his expression. His feeling of being ‘in over his head’ when faced with Natasha’s attitude, behaviour, and the crumbs of information she gives him about her experiences, as well as some of the situations that arise in the book, is something I think a lot of people can relate to from their own adolescence.

Looking back on my own experiences at that age, there were people who were really going through some things, and being in school with dozens of peers who simply didn’t yet have the capacity to understand or allow for their difficulties, the worst of whom would deliberately provoke and bait them, added to their problems. It was understandable that Natasha was so dead to the world, and I desperately wished she’d encountered someone with the knowledge and skills to reignite the spark she had lost.

That’s not necessarily anybody her own age’s fault - like the largely well-meaning narrator, as well as Natasha’s detractors, their still-developing prefrontal cortices affected their judgement and ability to think through the consequences of their decisions, and anyone who grew up to be a decent adult looks back and cringes at their youthful words and actions. She needed doctors, teachers, social workers to really notice she wasn’t okay.

I guess what I’m saying is that adolescence is hell because lots of things are new, the majority of the people around you are unstable, and nobody really knows what they’re doing, and The Dark Matter of Natasha does a bang-up job of illustrating that.

This novella also offers a small insight into the varying effects of trauma from person to person. Without giving too much away, while Natasha remembers her trauma, and it’s changed how she views and interacts with the world, another character forgets theirs out of self-protection, and manages to process it and eventually carry on once it resurfaces.

I’d also say that the narrator himself gets somewhat stuck in time as a result of the events he describes, and this is how he can access and reconstruct his teenage voice and feelings so comprehensively, and why, to some extent, he retains it as an adult.

The Dark Matter of Natasha is startlingly bleak, strangely beautiful, and very thought-provoking.