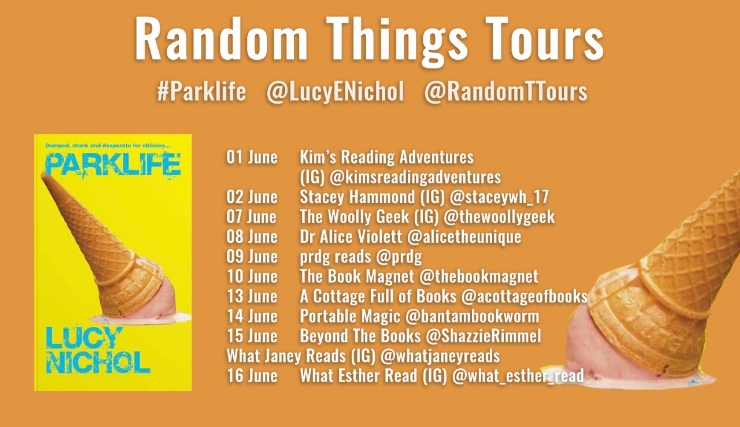 “It’s 1996. Emma’s been rejected by the man she loves and sacked from the job she hates. Feeling like she’s hit a new low, she finds herself serving ice-cream and phoney smiles at the park.

“Best mate Dave’s loved up, and her dad’s finally emerging from years of unemployment. Everyone’s life is on the up while Emma’s plummeting towards rock bottom.

“Every day she gives a free 99 to the lonely old man who sits on the park bench and reminds herself that life could be much worse.

“But soon, even sprinkles and monkey’s blood can’t hide the truth. She’s in deep trouble and losing sight of the edge. Who will help her up when she falls?” 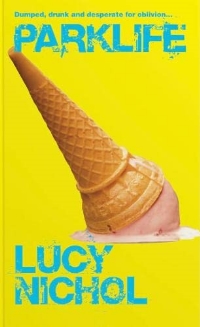 In Parklife, by Lucy Nichol, we’re reunited with Emma, Dave, and other characters from The Twenty Seven Club, two years later.

Things seem to be going well for everyone but Emma - the book begins with her being dumped by boyfriend John, and sacked from her boring-but-dependable job ordering bathroom supplies for caravans.

Living in surrogate nan Dor’s spare room, and working in an ice-cream hut in a park, Emma’s legendary fondness for a drink tips over into addiction and danger. Will her loved ones be able to get through to her in time?

The Twenty Seven Club was one of my favourite books of 2021, so I was very keen to get on the blog tour for Parklife. While the sequel is darker in tone, it features the familiar 90s setting and humorous observations and conversations that I loved in its predecessor.

Emma’s endearing, funny voice is still there too, but what makes this story so heart-breaking is that it comes under threat as she becomes unable to get through the day without a drink, and has blackouts where she acts in selfish, destructive, and out-of-character ways. I felt so sad and like I was losing her more and more whenever she did something she’d resolved not to.

Parklife does work as a standalone, but I think reading The Twenty Seven Club first will give you a better understanding of the brilliant character Emma is normally, and therefore exactly what’s at stake here. You’ll also get a clearer idea of what happened to her mum, which explains why Emma is the way she is.

In Emma’s increasing ‘absence’, other characters step up to the plate and remind you that there is some good in the world. While Emma’s behaviour can be frustrating, hurtful, and frightening, Dor, her dad Tel, and best friend Dave know it’s not who she really is. They refuse to give up on her, while being aware that there’s only so much they can do until she’s willing to help herself.

I enjoyed seeing more of Dor, an entertaining character who puts me in mind of Big Mo from EastEnders. Emma also strikes up a lovely friendship with Les, a recovering older alcoholic who frequents the park and is a continual source of wisdom. It’s such a positive, true message that there are always people will hold a space for you, not judge, and see your humanity, however bad things get.

This is also a very relatable book. You don’t have to have suffered from addiction yourself to sympathise with Emma when she wakes up dreading the day ahead, or feels like everyone else has things going for them while there’s nothing left for her.

Parklife is a heart-breaking and heart-warming story of addiction, friendship, and being good to one another as fellow humans.