‘Buyukada, Turkey, 2017. In the glow of a late summer morning, family gather for the 100th birthday of the famous artist Shirin Saka. It ought to be a time of fond reminiscence, looking back on a long and fruitful artistic career, on memories spanning almost a century.

‘But the deep past is something Shirin has spent a lifetime trying to conceal. Her grandchildren, Nur and Fikret, and great-grandchild, Celine, do not know what she’s hiding, though they are intimately aware of the secret’s psychological consequences. The siblings invite family friend and investigative journalist Burak along to interview Shirin - in celebration of her centenary, and also in the hope of persuading her to open up.

‘Eventually Shirin begins to express her pain the only way she knows how. She paints a story onto her dining room wall, revealing a history wiped from public consciousness and generations of her family’s history.’ 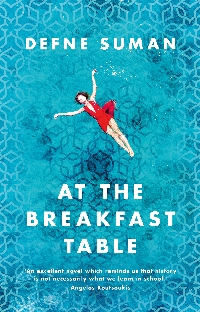 In At the Breakfast Table, by Defne Suman, we experience the eve of artist Shirin Saka’s 100th birthday from the perspectives of four characters: Shirin’s lifelong manservant Sadik; her granddaughter Nur; her great-granddaughter Celine; and journalist Burak, who is hoping to interview Shirin about her life. We follow them around Shirin’s house and the Turkish island of Buyukada where it’s located, and down memory lane as they remember key scenes from their histories.

Covering just one day over the course of 400 pages, this novel sets a leisurely pace that befits a holiday in an idyllic setting, as well as the patience required of the characters and readers as Shirin prepares to tell a story she’s kept under wraps for most of her long life.

I enjoyed how the stories of the individuals and the family as a whole built up over the course of the book until the secrets of Shirin’s early life, which impacted, or were echoed by, so many of these subsequent episodes were fully revealed. Without giving too much away, a formulative experience for Shirin (and Sadik) was a historical event I’d never encountered before, which was both fascinating and harrowing to read about.

A major theme of the book is trauma, not only for the two elders who locked their memories up tight for 90+ years, but for Shirin’s descendants too, in terms of both how Shirin interacts with them (especially her own late daughter, Nur’s mother Suheyla), and the effects trauma may have had on their DNA.

Of the four narrators, Nur, as the product of a mother and grandmother who were both enigmatic for different reasons, was the one I found most interesting. Maybe the inscrutability of the pair is what drew her to a career as a ghost writer, whose job it is to get into others’ heads and realise their literary visions for them. Funnily enough, I found her the most understandable, as well as the easiest to like and sympathise with, of the quartet.

Another theme that stood out for me was different types of love, and ways of expressing it. Sadik and Burak hold flames for Shirin and Nur respectively, despite both women having married others. However, they manifest this in very different ways, with Sadik contenting himself with lifelong service to his “little lady”, and Burak continually seeking to “win” Nur (as if she’s something he can own) and congratulating himself whenever he gets past her defences (usually when she’s vulnerable in some way), despite her obvious ambivalence towards him romantically.

Celine is experiencing an immature kind of love with an oblivious subject, which makes you feel embarrassed for her. In contrast, Nur’s love for her husband Ufuk, who is conspicuous by his absence from the island, is unshowy, even unstated, and their relationship requires work. Nonetheless, it’s clear from her behaviour that she loves him and wants to do that work, and learning about her family’s history could help her with that.

The author’s detailed descriptions of Buyukada and the surrounding sea, ably translated by Betsy Göksel, effectively communicate that this is a beautiful part of the world. There are also many wonderful descriptions of food that not only make your mouth water, but (along with the title of the novel) convey its importance in the characters’ lives, with momentous events and conversations often occurring when two or more of them are eating together.

At the Breakfast Table is an unhurried, multi-layered, and fascinating treat for the senses. 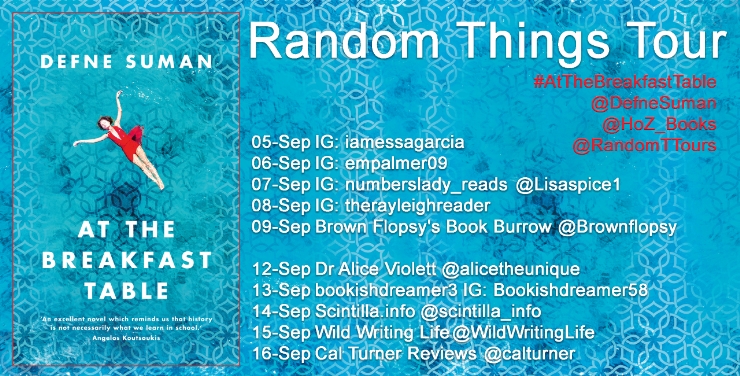