‘Close to Midnight is the third volume in an annual, non-themed horror series of entirely original stories, showcasing the very best short fiction that the genre has to offer, and edited by Mark Morris.

‘This new anthology contains 20 original horror stories, 16 of which have been commissioned from some of the top names in the genre, and four of which have been selected from the hundreds of stories sent to Flame Tree during a two-week open submissions window.’ 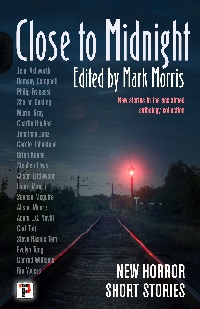 I sometimes have trouble reviewing anthologies, as there can be so much variation in the quality and appeal of the different stories. That’s definitely not the case with Close to Midnight, though - while I do have my favourites, I can honestly say I enjoyed and got something out of every single one of the contributions.

In fact, I’m now experiencing a positive problem that can arise from reading anthologies - an expanding TBR pile, as I must read more from so many brilliant new-to-me authors, as well as the previous two volumes.

Close to Midnight is stuffed with perfectly-formed cuts that render the familiar and bland (suburban homes; railway stations; sandwiches…) unfamiliar and attention-grabbing, elicit emotional responses, and provide ‘oh my god!’ moments of realisation when key bits of information are revealed or fall into place. Some of the stories will certainly stay with me for a while, and one did actually cause me to have a rather unsettling dream!

While there’s no formal theme uniting the 20 stories in the collection, there are nonetheless commonalities that draw many of the pieces together. One, as editor Mark Morris points out in the introduction, is loss. Many of the anthology’s characters are confronted with the death of, or irrevocable changes in, their relatives and friends, reflecting the real-life horrors of the last few years.

Another theme that particularly stood out to me was that of characters being stuck: with an esoteric home security system ordered by a house’s previous owners; with a malfunctioning medical innovation; at the incorrect age; in the place they were murdered; in a town over-run by the demographic most likely to have a say in a Tory leadership election; in others’ suffocating expectations of them; and more besides. Stuckness is another very real threat many of us have been faced with recently.

There are also plenty of pleasing references to existing work. For example, Conrad Williams and Evelyn Teng’s contributions put me in mind of W. W. Jacob’s The Monkey’s Paw, and I very much enjoyed Alison Littlewood’s creative use of Alice in Wonderland. Having gone mad for Shirley Jackson’s short stories recently, Jenn Ashworth’s story had me practically squealing with delighted recognition of the themes (and even a famous line) that crop up in Jackson’s work.

Close to Midnight is chock-full of high-quality, evocative horror stories featuring jaw-dropping moments and nods to classics of the genre. 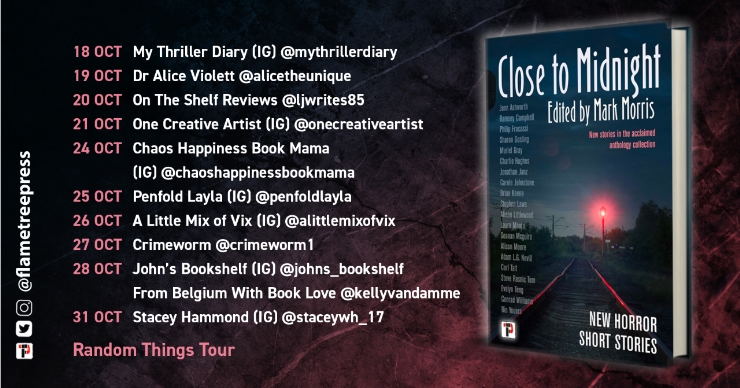