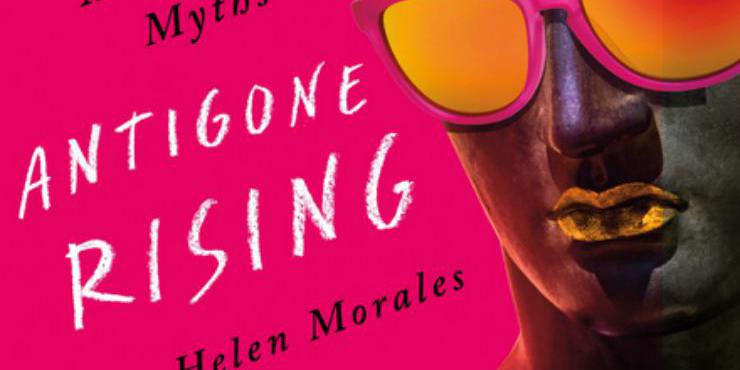 Greek myths are undergoing a real renaissance right now, with the huge popularity of books such as Stephen Fry’s Mythos and Heroes, and Madeleine Miller’s The Song of Achilles and Circe. Much as I’ve enjoyed the retellings that have come out over the past few years, though, Helen Morales’ Antigone Rising is the first book I’ve come across that engages critically with the representation of women, LGBT+ characters and ethnic minorities in the surviving versions of the myths.

This is no collection of straightforward, empowering stories for girl bosses. Some chapters paint a very bleak picture indeed: if violence against women by incels, the enforcement of dress codes that imply girls and women are deliberately provocative and boys and men can’t control themselves, and the dismissal of rape victims’ testimonies have parallels in the ancient stories, can we ever expect things to change?

Nonetheless, Morales is able to draw out positives from the stories: for example, plenty of ancient Greek women can be seen teaming up against, and beating, their oppressors. In fact, strength in numbers is a key message of the book: Morales points out that one reason the eponymous Antigone’s story ends badly is because she acts only for herself.

Even when the myths appear to provide validation and support for LGBT+ people today, Morales doesn’t give them an easy pass. After all, it’s not ideal that Caneus is granted a different, impenetrable body just as he’s in danger of rape, and Iphis has to become male for her relationship with Ianthe to be acceptable to society.

However, Morales points out that these examples are open to interpretation and adaptation. In the case of Caeneus, it can be argued that he knew himself to be male long before his aforementioned opportunity to transition - and afterwards, he is so impenetrable he’s not even hurt by violent attacks, an inspiring allegory for modern-day transphobia.

As for Iphis and Ianthe, Morales reports, in Girl Meets Boy, Ali Smith’s update of the ancient story, the Iphis character is enabled to “escape the prison-house of the story” and be joyfully, beautifully non-binary (I’ve totally added this book to my reading list!). Another key message: myths can be reinterpreted, altered, and used to emphasise different points. The original tellers themselves, after all, reshaped the stories to suit their own agendas and sensibilities. Even Antigone’s tragic tale isn’t set in stone.

This book is a relatively quick read, yet Morales covers a huge amount of cultural ground. As well as her approving commentary on Girl Meets Boy mentioned above, she discusses how the 2015 film Chi-Raq positively updates the story of Lysistrata’s sex strike (yet fails to address the reality of domestic assault and rape against women taking such measures), covers the enduring influence of Greek myths in Mexico (including the story of real-life vigilante Diana, Hunter of Bus Drivers), lovingly dissects Beyoncé and Jay-Z’s Apeshit video (did you know marble statues were actually brightly-painted, so it’s incorrect to regard them as depicting white people?), and much more. I learned about loads of interesting things! I was surprised that Kamila Shamsie’s Home Fire didn’t get a mention, though, based as it is on Antigone.

Antigone Rising is a wide-ranging treatise that demonstrates the power, nature and uses of stories and provides grounds for optimism.

Antigone Rising is published by Headline on 14 April 2020