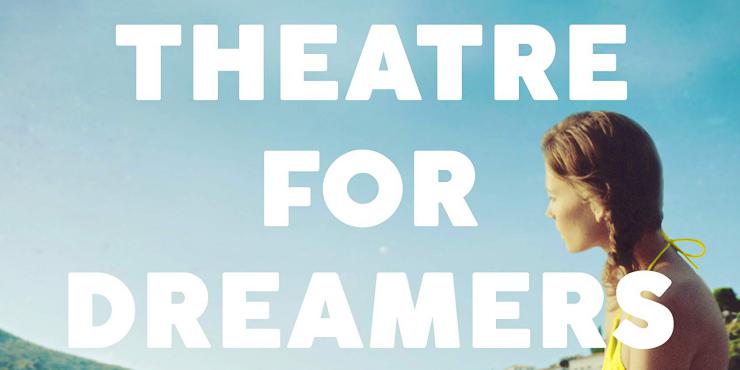 In Polly Samson’s new novel, A Theatre for Dreamers, we’re transported to the Greek island of Hydra in 1960 with Erica, a 17-year-old girl who’s recently lost her mother and used her unexpected inheritance to escape from her bullying father and ‘have an adventure’, along with her brother, Bobby, and boyfriend, Jimmy. Their former neighbours Charmian and George live on the island, along with an assortment of ragtag writers, artists and musicians living the bohemian life.

As other reviewers have pointed out, this novel’s publication date has turned out to be particularly fortuitous, as readers are in lockdown and looking for fiction that transports them to exotic places! Samson definitely delivers the goods with long, lush, languorous descriptions of life in an idyllic location with lots of lovely food and drink.

It’s not completely relaxing, though, as there’s a constant sense that things are about to descend into nastiness between the characters. A big theme of the book is that people are who they are, no matter their location. George and Charmian, both writers, have a terrible relationship and are constantly sniping at one another, while the other characters’ drinking, drug-taking, bed-hopping and (in some cases) general awfulness inevitably leads to arguments, violence and unwanted pregnancies.

Another big theme is how artistic men treated their wives and girlfriends at this time. Through Erica’s eyes, we witness how Marianne Ihlen, although ostensibly a ‘muse’, is treated abysmally by philandering author Axel Jensen, and then as a helpmeet by Leonard Cohen. Charmian, who rapidly becomes a replacement mother figure for Erica, regularly reinforces the message that women should be free to pursue their own endeavours, while acknowledging that she’s propping up George’s career at the expense of her own by helping him write his books and doing all the cooking, cleaning and childcare.

Erica herself ends up very much in service to her boyfriend, brother, and the other young artists and writers they live with, often reasoning that they’re painting all day, or had a late night, whereas all she does is write in her notebook now and again. I felt really quite sad for her, and that she wasn’t really ‘following her dreams’ or ‘having an adventure’ so much as playing house somewhere nice.

Erica really isn’t part of the social group - she reports what happens on the island with the detachment of an outsider, her brother is horrible to her, and her boyfriend is the kind who just wants to show off to his friends all the time, and only pays her much attention when they’re alone together. Nonetheless, her period on Hydra is clearly a formative experience in her life: she develops as a person by reading Sartre and de Beauvoir and observing others, she eventually does become a writer, and she has enough affection for the island to return there when she’s older and ask what became of the people who lived there.

I went into this book with no knowledge that it was based on real events (it was a long time before I was born…). I did catch on that Leonard was Leonard Cohen pretty quickly, but it was only quite a way in, when Charmian talks about Elizabeth Jane Howard as a friend who also has connections with the island, that I really made the effort to find out which characters were based on real people. I think that’s a very good thing - it means you can enjoy this book whether you know the background or not, and shouldn’t be put off if you’re not very familiar with anyone in it.

A Theatre for Dreamers is a highly transportive novel that makes important points about human nature and women’s subjugation and exposes the dark side of the bohemian dream.