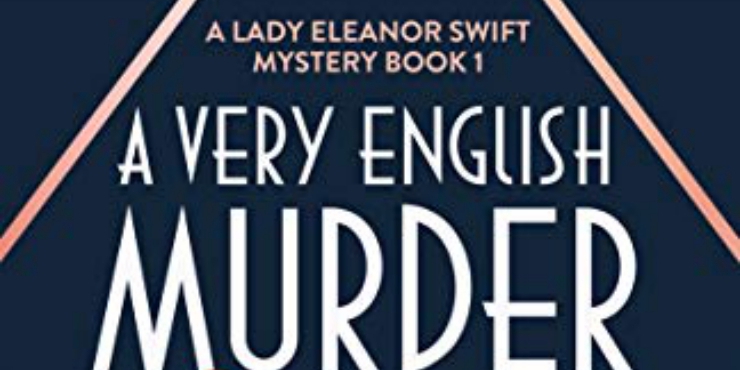 A Very English Murder, by Verity Bright, is set in 1920. Lady Eleanor Swift has not long moved into Henley Hall, a classy mansion in the Chilterns inherited from her late uncle, when she goes for a walk and witnesses a murder at a disused quarry. However, all evidence of it is swiftly removed and the police are loath to investigate, happy to conclude that the victim died in an unfortunate accident at his own home. It’s up to Eleanor, her butler, Clifford, and portly bulldog Gladstone to uncover the truth.

I enjoyed this book for several reasons. For one thing, it’s a great crime story, featuring a tenacious sleuth, twists and red herrings, and a satisfying conclusion. Eleanor knows what she saw, and she’s determined to find out what happened. She asks questions of anyone in the local village who might know something and well and truly sticks her nose in where it’s not wanted, undeterred by the even most unforthcoming characters. She’s not afraid to go where she’s not supposed to, or court danger - even with Clifford as back-up, she gets into some really sticky situations.

As Eleanor reveals throughout the book, though, she’s no stranger to danger: before she inherited the hall, she worked for a travel company, scouting out routes to sell as tourist packages. When she meets with other members of the local gentry, she delights and appals them with her stories of her adventures around the world - some of them love hearing about the extraordinary things she’s seen, while others think it was a thoroughly unsuitable job for a woman. Of course, I was among the former and would happily read a whole series of prequels about her pre-Henley Hall experiences! We’re also given glimpses into Clifford’s past as butler to Eleanor’s mysterious uncle, marking him out as another character with an interesting backstory that I hope we’ll read more about in future books.

I also liked how warm and vivid this book was. Eleanor’s unconventionality doesn’t end with her former career; she treats her servants as friends, even mucking in with the cooking sometimes and eating and drinking with them. In fact, everyone at Henley Hall is really friendly - even Gladstone the dog takes to Eleanor straight away and follows her around for much of the story. This made the Hall feel like a really fun place to live and somewhere I’d want to visit myself. The food itself, whether Eleanor’s eating at home or elsewhere, is also so well-described that my mouth started watering on a couple of occasions!

There are a lot of humorous moments, but the interactions between Eleanor and Clifford are particularly amusing. At the beginning, he seems like a typical, stiff butler, and though he loosens up pretty quickly, he still retains some quirks, such as his frustration that Eleanor doesn’t observe conventional mealtimes, and his tendency to provide extraneous information. In some ways they reminded me of M. R. C. Kasasian’s March Middleton and Sidney Grice - although they’re also very different in the sense that Eleanor is attractive with some amazing-sounding clothes, and Clifford is polite and pleasant.

A Very English Murder is a warm and inviting murder mystery that keeps you turning the pages with intrigue, interesting characters, vivid scenes and humour. I can’t wait to read more books about Eleanor, Clifford, Gladstone and the rest of their household.

A Very English Murder is published by Bookouture on 7 April 2020.