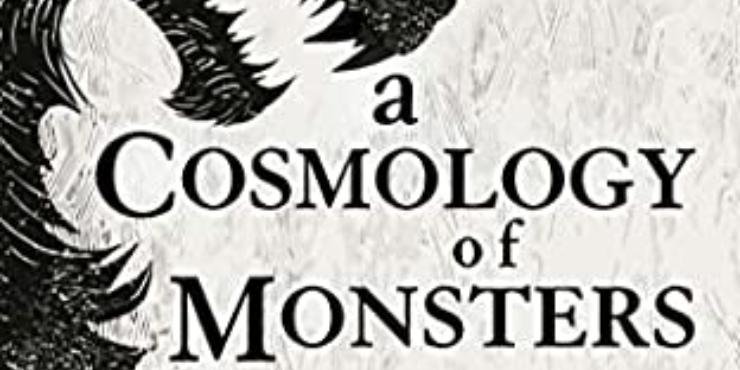 A Cosmology of Monsters, by Shaun Hamill, follows the lives of the Turner family. It’s told from the viewpoint of Noah, the youngest of three children, and starts with events before his birth, as they’ve been described to him: his parents’ courtship and marriage, his dad’s lifelong love of horror and sudden personality change that turned out to be a terminal brain tumour, the legendary haunted house the family created for Halloween while Noah’s mum was pregnant - and, just offstage, a dark, wolf-like creature with orange eyes that sometimes scritched on their windows at night.

By the time Noah puts in an appearance, his father (Harry) has just months to live, so he never knows him. Noah grows up in a grieving household: his mother (Margaret) is undemonstrative, his eldest sister Sydney is angry, and his other sister Eunice is the one who reads to him and puts him to bed. Perhaps it’s no wonder, then, that when the monster starts showing up at his window on the regular, he befriends it and invites it in. But what is Noah committing to with this friendship, and what direction will it take as he grows older? And is the mysterious disappearance of local children, including Sydney, something to do with the monster?

A Cosmology of Monsters blends horror and literary fiction in a way that really worked for me. Like Michael Andrew Hurley’s The Loney - another successful hybrid of the two genres - it features a fractured family who don’t communicate about the strange things they’ve seen. Hamill goes beyond thrilling scares to create a moving portrait of people dealing with issues such as money worries, unexpected pregnancies, physical and mental illness, death and disappearance, sexuality, and more. The story left me with a lingering feeling of sadness about some of the characters’ wasted years - whether this happens in a conventional way (spending years in unsuitable marriages or religions instead of facing up to their true selves) or not (I can’t go into that without spoilers!).

Hamill also makes interesting and knowledgeable points about religion, whether it’s the young Margaret’s surprise at the chastity of a college boyfriend (“She’d always assumed that religion was something you did in polite company, not in private. Surely nobody actually believed any of the stuff they agreed to on Sundays.”), the way the scenes in a Christian haunted house visited by Noah are far more disturbing than anything the Turners put on for their guests (it sounds really obvious when I put it like that - you have to read it to get the full effect!), or how being part of a hardline Christian sect makes Eunice’s ex-girlfriend Brin act cruelly and feel afraid of herself (without giving too much away, this mirrors an element of the ‘monster’ storyline).

After the success of Harry’s inaugural haunted house, the Turners start running an attraction each year when Noah is a child, to make much-needed extra money. I’m a huge sucker for stories-within-stories, so I loved how Hamill included the ‘narratives’ for the Turner family’s haunted house rooms. I found them really creative and inspired, and, as someone who was a big writer as a kid, loved how the young Eunice got really into writing them, staying up late typing on her ZX Spectrum. I also never previously gave any thought to how much work would go into creating a coherent and truly creepy haunted house experience!

Other parts of the book, set in a parallel-universe ‘City’ close to where the monster lives, also appealed to me because they were so dream-like. In the City, buildings are never in the same place twice and scenes from the ‘normal world’ take on different dimensions and qualities - current homes lead into previous homes and are furnished with different objects.

This really upped the eerie factor as I’m always having dreams about alternative versions of city/town/shopping centres and houses I’ve known, where shops change places or don’t even exist in real life, rooms expand and sprout further rooms, and those rooms are full of books that don’t exist in real life but look good, contain interesting-looking junk, or something normal is broken. It’s so nice to see someone manage to describe that while preserving the trippy factor (along with horrors I don’t get in my dreams!). I’ve always wanted to put those dreams into words myself but they become too prosaic in my hands!

A Cosmology of Monsters is spooky and sad and wonderful and will definitely stay with me for a while.

A Cosmology of Monsters is published by Titan Books on 29 June 2020.