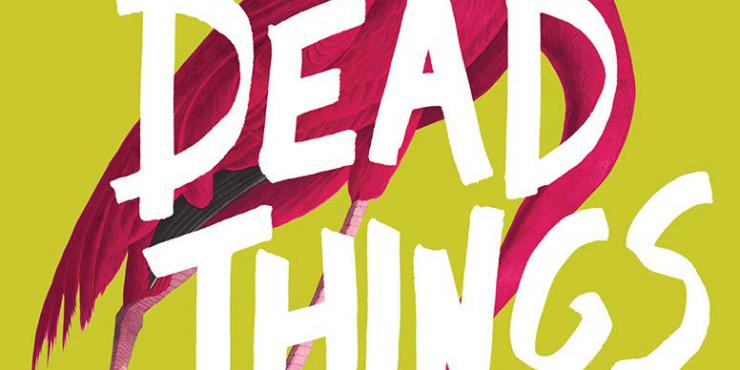 In Mostly Dead Things, by Kristen Arnett, we meet Floridian Jessa-Lynn Morton. Since her father killed himself a year ago, Jessa has been carrying on his taxidermy service and shop and propping up her family - mother Libby, brother Milo, and Milo’s children Bastien and Lolee. She’s her father’s natural successor - she’s strong-stomached and skilled, whereas Milo is squeamish and ineffective.

However, money is tight, and Libby has started expressing herself through alarming art projects involving taxidermied animals, spare parts, and sex aids. Jessa is appalled and embarrassed by her mother’s creations, and it gets even worse for her when attractive local gallery owner Lucinda Rex takes an interest in Libby’s work. Can Jessa ever come around to her mother’s point of view, and get better at opening up and sharing her own feelings?

I’m a very squeamish person myself, and lots of scenes in Mostly Dead Things describe Jessa and other family members practicing taxidermy, yet after maybe the first couple of descriptions, it stops being icky. Instead, what comes through is the passion, skill, and hard work involved, which I had never really considered or appreciated before.

I love reading books where characters carry out skilled artistic work with their hands because it’s a chance to experience a life totally different from my own - sitting at a computer day in, day out - and this story turned out to be a fascinating example of that. In fact, I was far more grossed out by the descriptions of the human characters’ bodily fluids and smells - especially when they squeezed spots, or Jessa casually wiped anything nasty on her jeans. Though it is different to see that stuff actually included in a book, I suppose!

It feels as though the ‘Mostly Dead Things’ of the title refers more to two people whose absence haunts the book, rather than the animals who, while dead, are still there in optimal physical form. One of these missing characters is Jessa’s dad: Jessa is quietly traumatised by discovering his body and the note he addressed only to her, and weighed down by his expectation that she should take his place, while Libby’s feelings about him directly influence her shocking art.

The other is Brynn: Milo’s former wife, Jessa’s former lover, and mother of Bastien and Lolee, who isn’t dead but deserted the family more than a decade previously, leaving a hole in all of their lives. Over the course of the story, Jessa, Libby and Bastien in particular make real progress in putting themselves back together and discovering just who it is they’re going to be. That all makes this book seem really earnest, so I should make it clear that there’s a thread of dark humour going through it. The scenes where characters react to Libby’s art are particularly funny!

Although I shared Jessa’s view of her art initially, Libby was the character I found myself cheering on the most. Much like the women in A Theatre for Dreamers by Polly Samson, Finding Dora Maar, by Brigitte Benkemoun and The Age of Light, by Whitney Scharer, during her marriage, anything Libby creates is regarded as secondary to her husband’s work. The crafts she makes to decorate the house, and the clothes she sews, are taken for granted by her children and dismissed by her husband as ‘domestic arts… to pass the time’, and it’s not until her thirties that Jessa finds out her mother had a passion for sculpting as a student. For these reasons, it’s really exciting and satisfying to see Libby bloom and receive credit for her work.

Mostly Dead Things is a tender, visceral and darkly humorous story of a family’s recovery from grief.

Mostly Dead Things is published by Little, Brown on 2 July 2020.