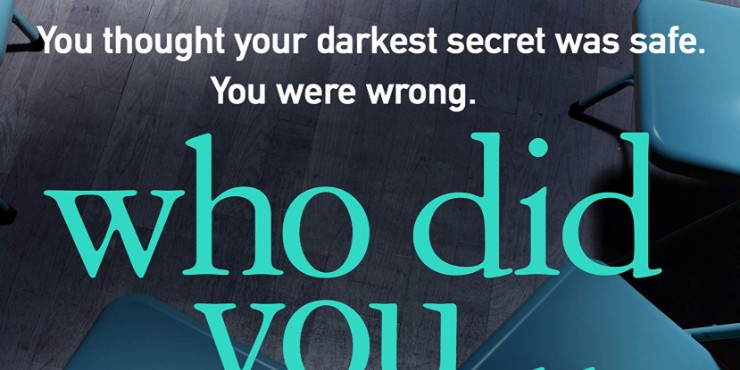 I received a free advance copy of this book from Alison Barrow from Transworld at a pre-launch dinner for Colchester book-lovers (you can read more about this in my review of Confessions of a Bookseller, by Shaun Bythell). The opinions expressed in this post are entirely my own.

I enjoyed reading Lesley Kara’s debut thriller, The Rumour, early last year, so when I was offered the opportunity to go to a pre-launch dinner where I could pick up an advance copy of her new novel, Who Did You Tell?, it was a no-brainer really. I couldn’t wait to return to Flinstead (the seaside setting of both books, loosely based on Lesley’s hometown of Frinton) and see what else lurked behind its genteel, respectable veneer.

In Who Did You Tell?, recovering alcoholic Astrid, having nowhere else to go after the death of her former partner and a spell in rehab, returns from London to live with her mother in Flinstead. As she tries to rebuild her life virtually from scratch, she feels like someone’s watching her, and her fears are substantiated by a couple of anonymous letters, as well as some other unsettling goings-on. Whoever’s behind them knows about something terrible she did while she was under the influence, and they’re determined to make her pay.

As in The Rumour, the ‘crime’ element of Who Did You Tell? doesn’t take the form of an immediate or explicit offence. In both novels, suspicions and tensions mount as characters try to go about their everyday lives but find them interrupted by small but disturbing events, building up to a dramatic climax.

This makes Who Did You Tell? a treat for both literary and crime fans (so that’s me doubly covered), as while the menace slowly insinuates itself, you learn a lot about Astrid’s character and get invested in her story. I was kept hooked by the questions of ‘who is threatening Astrid? What did she do?’ as well as ‘will Astrid stay sober and establish a new life for herself?’ - no wonder I read it in less than 24 hours!

I really liked Astrid - it felt as though she was really determined to get back on track. She’s written in such a sympathetic and understanding way that I really felt for her when she was tempted to drink or skip her AA meetings. I was cheering her on whenever she overcame temptation, as well as when she returned to painting, giving her the opportunity to use her talent as well as earn some money for herself.

I loved the level of detail Lesley included about Astrid’s paints and tools, and finding out how, before alcohol took over her life, Astrid was an art student who specialised in frescoes and trompe-l’œils. This backstory and the passion she had for art made her feel even more ‘real’. I also related to the indignities she experienced as a result of living at home in her thirties, and the claustrophobia of living in a small seaside town (luckily, I didn’t have both at the same time, though!).

This sympathy put me in quite a difficult position when Astrid’s past misdemeanour was revealed. On the one hand, though following her first-person account, I felt like I ‘knew’ it wasn’t something she would do if she was in her right mind, and that she was truly remorseful and trying to become a better person. On the other, she seemed to have done an awful thing, and only her tormentor was stopping her totally getting away with it. Like The Rumour, which poses dilemmas about the treatment of child-killers once they’ve done their time and grown up, there are no easy answers - Lesley’s books may be easy to read, but that doesn’t mean they don’t challenge you! 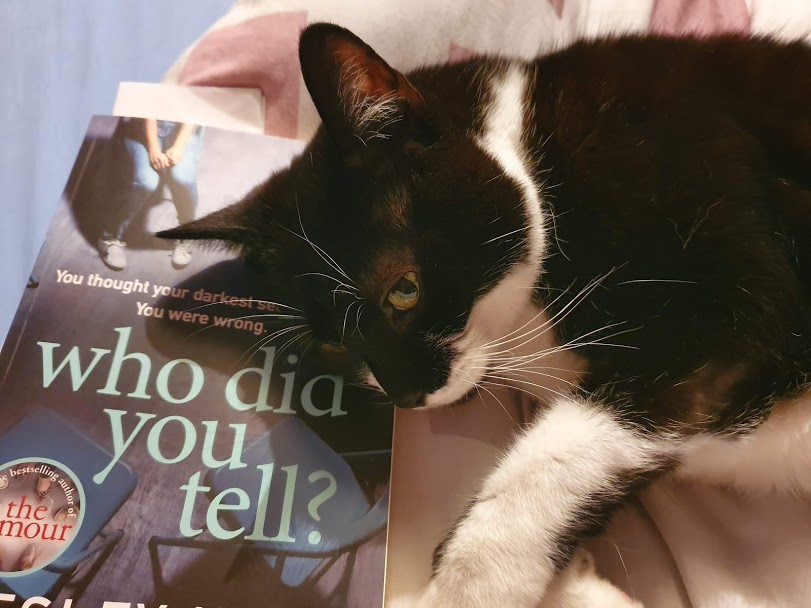 Toby also enjoyed Who Did You Tell? because it is a very comfortable pillow

Who Did You Tell? is quick and pacey, with an unsettling sense of menace throughout, great descriptions, and fully-realised characters. It’s hard to say much about the plot without spoiling it, but let’s just say that nothing is quite what it seems, and when you think something has been resolved, Lesley turns it completely on its head and makes you think again!