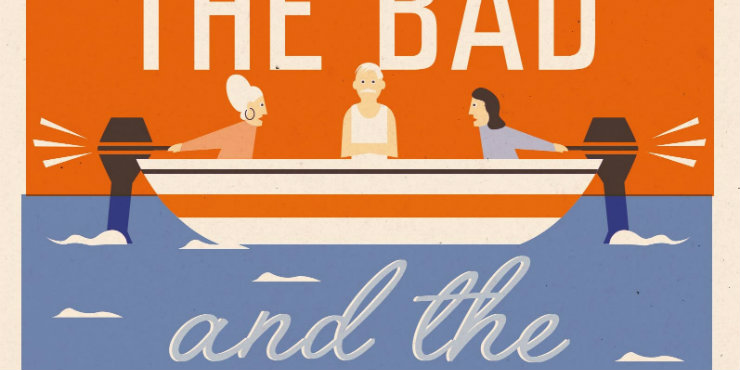 The Good, the Bad, and the Little Bit Stupid is a short, pacey read. Like Marina Lewycka’s other books, seemingly ordinary domestic events - in this case, a man (George) having a late-life crisis where he has an affair with a neighbour (Brenda), leaves his wife (Rosie), and falls for a cyber scam - lead to much more, snowballing into an out-of-control situation where several characters end up in a shoot-out on an island off Albania.

As is her trademark, Lewycka provides lots of amusing observations on the absurdity of 21st-century life and there are some real laugh-out-loud moments. She also makes good points about how people cling harder to their beliefs when presented with contrary facts, and how Britain seems to be irreconcilably divided as a result of the Brexit referendum. While most of the characters have stereotypes at their base, I nonetheless was able to sympathise with and relate to the neurotic, unfulfilled Millennial characters Sid and Cassie, and recognised elements of Boomers I know in Rosie in particular.

There were times where I felt events were handled a little too light-heartedly; the characters seem relatively unscathed by their terrifying ordeal, and there are a couple of jarring minor events I feel served little purpose and could have been edited out to make a smoother and more cohesive whole. I couldn’t fathom what Rosie and Brenda saw in George, especially after his stupidity nearly got them killed - perhaps, like her Brexiteer neighbour, Rosie is immune to evidence that George isn’t that great! I also found the use of present tense and the usually short chapters that facilitated frequent changes of point of view a bit dizzying sometimes.

Although The Good, the Bad, and the Little Bit Stupid isn’t my favourite book from this author, it nonetheless contains the elements of her writing that I love, and if you’re looking for a quick, light-hearted read, you can’t really go wrong by giving it a go.

The Good, The Bad and the Little Bit Stupid is published by Penguin on 5 March 2020.