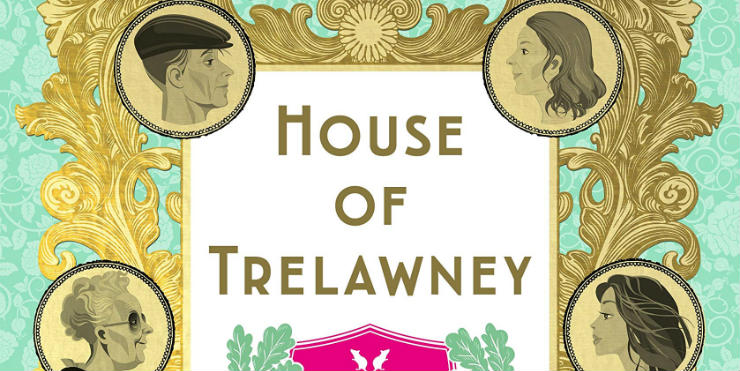 I really enjoyed Hannah Rothschild’s first novel, The Improbability of Love, a few years back, so I was excited when I joined Netgalley and found I could read her new one, House of Trelawney, ahead of its official release. I wasn’t disappointed: it was a lot of fun, and I loved seeing the characters develop over the course of the story.

House of Trelawney follows the (mis)fortunes of several characters from the Trelawney family, members of the aristocracy who have lived on the same (massive) spot in Cornwall since the middle ages and are barely clinging to their sprawling, crumbling ancestral home in 2008, when the story begins. Rothschild really brings the setting and family to life by creating a rich backstory of amusing legends and anecdotes from the dynasty’s past.

The various Trelawneys are faced with crisis after crisis - including, naturally, the financial one - in this state-of-the-nation satire, and I read a lot of the book in one go because there was always so much going on to hold my interest. As in The Improbability of Love, Rothschild isn’t afraid to put her characters through the mill, and it’s a credit to her writing that many of them are so likeable that you feel sorry for them and hope things turn out okay. And when a particular character isn’t likeable, they more than make up for it in laugh value!

As well as the humour, what I really loved about House of Trelawney was the way practically everyone in it develops and ‘comes into their own’ in some way. This is especially true of Jane, who has married the head of the family and been burdened with the Sisyphean task of keeping the house relatively intact while also looking after her curmudgeonly parents-in-law, and Blaze, the ‘spare’ daughter who lives a dull life as a City trader. The struggle to save Trelawney transforms both of them in very positive ways as they - and we - discover new aspects of their characters.

One quibble I did have was that the characters kept referring to Apple as a ‘new company’ it would be wise to invest in. As Apple had been around for more than 30 years and made the Mac, iPod and iPhone by 2008, I’m pretty sure everyone would have already heard of them! I’d have also liked to have read more about Aunt Tuffy - an endearingly eccentric entomologist - as she was such an interesting character.

In House of Trelawney, Rothschild combines hilarity with tenderness, putting sympathetic characters in situations that reflect and parody the ridiculousness of modern life. I would recommend it to fans of Jonathan Coe, as well as anyone who enjoyed One Week, by Sebastian Faulks, and Capital, by John Lanchester.

House of Trelawney is published by Bloomsbury on 6 February 2020.