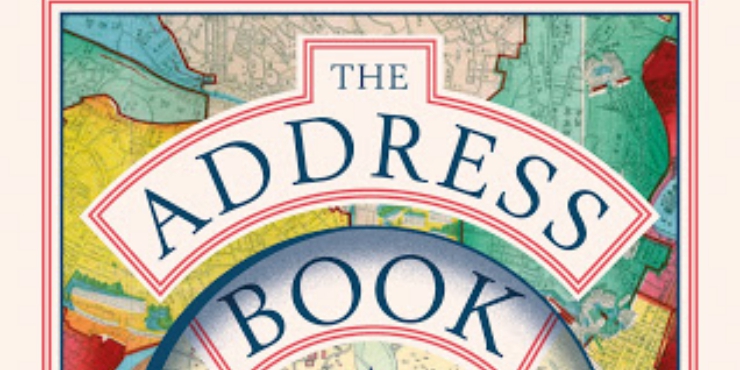 Recently, I was at an induction event for my new job, where I met someone from my town. When I described whereabouts I lived, they said something like, “oh, near Stalin Road?” We then explained to our team-mates that the road was built when Stalin was an ally (other roads in the vicinity are Roosevelt Way and Churchill Way) and residents didn’t want to change its name, and swapped memories (mine of delivering papers, theirs of some prefabs that used to be there). Who knew the name of a road could be such a conversation-starter?

It’s certainly something Deirdre Mask knows, as her new non-fiction title The Address Book shows very well indeed. I was attracted to this title when I spotted it on Netgalley because of my love for TV shows such as The Secret History of Our Streets and A House Through Time, my enjoyment of a historical demography module I took as part of my Master’s degree, and my abiding curiosity about the streets I know and how they’ve come into existence and changed.

In The Address Book, Mask takes us around the world and into the past as she explores ‘what street addresses reveal about identity, race, wealth, and power’. She talks to experts from a variety of disciplines, and tells the stories of people past and present who have sought to impose order on their cities and Earth at large. Their motivations include making people more findable by emergency and postal services, helping them rise out of poverty, as they need an address to register bank accounts and apply for welfare payments and jobs - or bringing them under the eye of the state, so they can be taxed, conscripted and arrested. Having to give my address on official forms and the like is such a normal part of life for me that I’d never even considered this last reason, so it was extremely interesting to read about people who didn’t want to be assigned an address because of the increased surveillance it would bring.

Another thing about this book that particularly fascinated me was Mask’s discussion of the different ways people map their spaces, from ancient Rome where city-dwellers found their way around using sights, sounds and smells, to modern Japan and Korea, where space is measured in blocks rather than streets.

Mask notes that GPS has diminished our need to navigate by landmarks, as we can use it to find the street we’re looking for quickly and accurately. However, I like to think I’m still using my inner navigational skills to some extent, as whenever I’m about to go somewhere new, I walk the route in Google Streetview so I can recognise buildings (provided they haven’t changed since it was last updated) and be sure I’m going the right way when I’m there in person. It’s a great tool if you get a bit anxious about getting lost! I also love idling around with the option that shows previous images, seeing how scenes have changed since the streets were first photographed.

To return to controversial street names, Mask tells some really interesting stories about them, and those who support and oppose changing them. On the one side, you’ve got people who want to retain historical links (for instance, a street with the unfortunate moniker ‘Bell End’ was named for a long-gone medieval church referenced in the Domesday Book), celebrate the good things historical figures did even if they weren’t so wholesome in other ways, or just don’t want the hassle of an address change. On the other, there are people who rightly feel affected by living on, or near, streets named after oppressors, and that keeping the names sends the message that they’re not fully accepted where they live.

Mask additionally discusses the confusion that arises when streets change their names multiple times to reflect regime changes (for example, in the former East Germany), so that two people from different generations could be talking about the same street and not recognise they’re doing so. If Stalin Road did change its name, would people still call it that anyway, and would it have remained a point of connection for me and the person I met the other day?

This review barely scratches the surface of what you can find within this book. Other topics include street numbering (in Belgium, they used to number houses in the order they were built!), vanity addresses, and renaming streets as a form of protest. The Address Book is truly fascinating and wide-ranging. Not only did I learn a huge amount, but it made me think a lot more about where addresses come from, how they’re used, and how they can generate conflict and controversy.

The Address Book is published by Macmillan on 2 April 2020.