I received a free copy of this book from the author in return for an honest review. 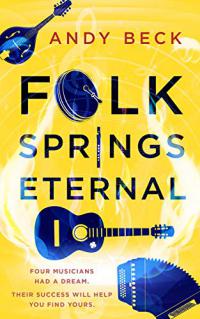 In Folk Springs Eternal, by Andy Beck, we meet Gus, Lin, Herman and Rash, who make up punk-folk band Kilmainen. We follow them through soaring highs and shattering lows as they hustle their way to success in the pubs of Halifax, Nova Scotia.

As the description above suggests, this novel is a rollercoaster ride, and you really do feel the band members’ emotions alongside them. In one chapter, percussionist Lin falls victim to hate crime on a bus, and my heart was in my mouth as I desperately hoped she would make it out of the situation okay. The author’s descriptions of the music the band create and the venues they play, meanwhile, are very vivid and made me miss going to gigs even more than I already did!

The book has a number of positive messages. One is that whenever one door closes, another opens, and that things can turn around really quickly. There are points in the story where you think, that’s it, the band can’t possibly go on, but then their fortunes change dramatically.

Another is that people are capable of change if they really want to. All of the characters have their strengths and weaknesses, but with the belief and forgiveness of their bandmates, they’re able to make improvements for the sake of themselves as well as the band. The author doesn’t shy away from heavy topics, for example showing how destructive drinking and anger can be if not managed properly.

This novel drew me in with an exciting narrative, realistic characters, and a sense of movement, both in terms of the characters growing and changing, and the band developing its sound and achieving victories on the way to success. I would have liked there to have been more of it though - it’s quite a quick read - and there is a little unnecessary explanation in places. I came away from it feeling comforted and uplifted.