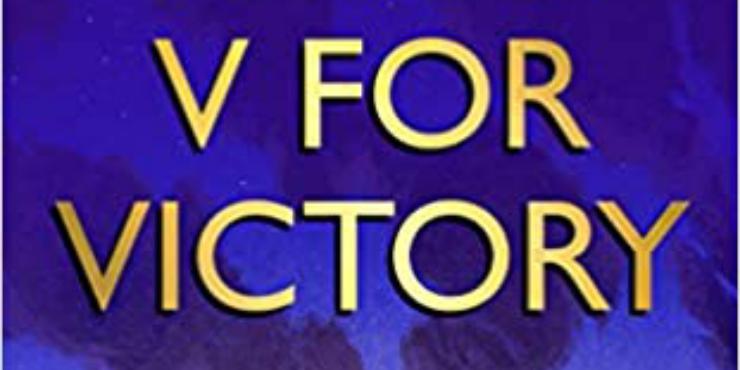 “It’s late 1944. Allied victory is on its way, but it’s ruddy well dragging its feet. Hitler’s rockets are slamming down on London with vicious regularity and it’s the coldest winter in living memory.

“In a large house next to Hampstead Heath, Vera Sedge is just about scraping by, with a household of lodgers to feed, and her young ward Noel (almost fifteen) to clothe and educate. When she witnesses a road accident and finds herself in court, the effects are both unexpectedly marvellous, and potentially deadly, because Vee is not actually the person she’s pretending to be, and neither is Noel.

“The end of the war won’t just mean peace, but discovery, and not in the way any of them could ever expect.” 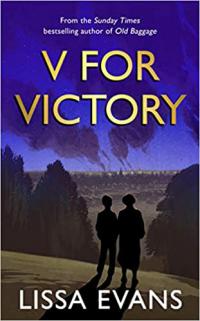 I adored Lissa Evans’ Crooked Heart and Old Baggage, so I jumped at the chance to be on the blog tour for V for Victory, and I was not disappointed. What I really love about Evans’ novels is the way her descriptions of people and scenes, a well as her characters’ observations, absolutely shine out of the page. She has a brilliant, clever and witty turn of phrase that I just can’t get enough of.

V for Victory picks up four years after the events of Crooked Heart. Noel is now an awkward teenager of fourteen, still living in his late godmother Mattie’s house with Vee, who’s less fly-by-night than she used to be, but continuing to use a false name and paranoid that someone will find out she’s not actually Mrs Margery Overs. It’s evident that they’ve really come to care for one another over the years, but in some ways, Noel is more like a parent to Vee than the other way round.

This comes out not only in his precocious maturity, fierce intellect and role as household cook, but also the way he coaches and supports her when she has to give a witness statement in court, and how he worries when she gets stuck in Brighton overnight when a jaunt with larger-than-life American Corporal O’Mahoney descends into chaos. While Noel’s concerns that Vee might have been killed are understandable given the historical context, you can’t help but be tickled by his imaginings of what a Methodist funeral might involve!

By filling Vee and Noel’s house with lodgers (who double as home tutors), Evans brings in some memorable new characters, each with their own particular quirks and backstories, such as exacting Dr Parry-Jones, who doesn’t understand jokes, and tiresome Mr Reddish, who recites poetry at every opportunity. Even though she’s been dead a few years, Mattie - whose life we read about in Old Baggage - retains a presence in the memories of Noel and air raid warden Winnie, a former member of the girls’ club Mattie founded.

Winnie’s story brings additional comedy; I loved her POW husband Emlyn’s letters, which reveal an increasing obsession with home and garden design, and her weary exchanges with her glamorous twin sister Avril, who has written a racy novel based on Winnie’s job. However, Winnie’s experiences also illuminate the more ambivalent feelings people could have about the war coming to an end. She’s been very successful and useful as a warden, and is unsure what her purpose in life could be once she’s no longer needed. She also feels as though she barely knows Emlyn, who was captured four years ago, soon after their short courtship and quick marriage.

In fact, virtually everyone has something to worry or be sad about, quite aside from the war itself, grumbling on in the background. Vee is never completely able to relax and have fun because she’s worried her true identity will be exposed. Lodger Mr Jepson still suffers the after-effects of the First World War, where he lost an ear, and has a disastrous failed marriage behind him. People die, or lose everything in the air raids, having made it through so much of the war in one piece. Without giving too much away, Noel learns more about his past, resulting in heartache for both himself and Vee.

The world of V for Victory is one where things often feel untethered, scary and tragic, but the characters take care of one another, form new relationships, repair existing ones, and manage to keep going. There’s humour to be found in virtually every situation, no matter how dire, and on the whole, the end of the war brings hope (however tentative).

V for Victory is a funny and bittersweet read about everyday life towards the end of the Second World War.