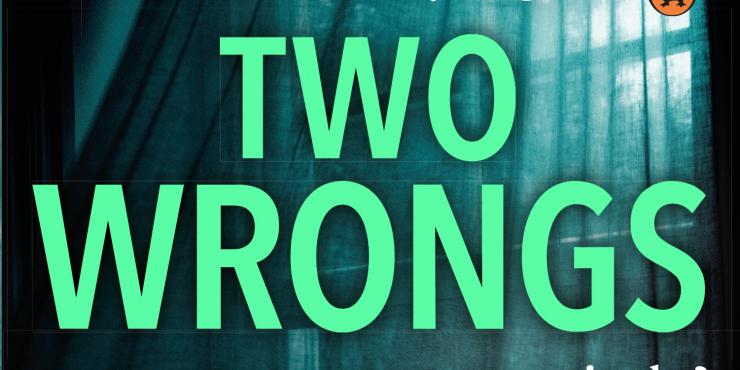 “How far would you go to correct your worst mistake?

“When Chloe goes to university and meets wild, carefree Zadie, she is utterly seduced by her and her lifestyle. It doesn’t take long for Chloe to ditch her studies in favour of all-night parties at Zadie’s huge house off campus.

“But when something goes badly wrong one night and Zadie disappears in the aftermath, Chloe knows she should have done more to help her friend. It’s something she’ll always regret.

“Fifteen years later, Chloe finally gets the chance to make it right. But in order to do so, she’ll have to put everything at stake…” 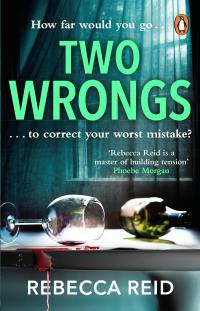 In Two Wrongs, by Rebecca Reid, we flick back and forth between two timelines: 2004-5, when girl-next-door main character Chloe goes to university and becomes friends with privileged, troubled Zadie, and (an alternative, mercifully covid-free) 2020, when Chloe is married and working as a teacher and still wondering what happened to Zadie after she suddenly disappeared from her life. A shock discovery motivates Chloe to go to extreme lengths to finally confront the person she’s been blaming for Zadie’s disappearance for more than 15 years.

I found it very easy to imagine the settings of both timelines thanks to the author’s evocative descriptions. Reid skilfully builds a picture of Chloe’s first-year university experiences that in many ways matches my own, three years later: pubs so packed with freshers that you can’t find anywhere to stand, let alone sit; cheap, cheerful and cheesily-named nightclubs; and finding who you think you will be your friends for three years and clinging on for dear life even when you start getting doubts that they’re ‘your people’ after all. And yet, it did make me feel nostalgic and even more sad that campus teaching spaces, libraries, pubs and clubs are lying empty this year.

Chloe and her partner Rav’s life in the present day was also recognisable to me: never quite managing to save enough to live somewhere nice even though there’s two of you working full-time; feeling oppressed by a lack of physical space; and doing your best to remind yourself that life isn’t a competition that other people your age are doing ‘better’ at than you.

I liked Chloe and Zadie, for different reasons. As suggested above, I really identified with Chloe. I shared her initial disappointment that university wasn’t some intellectual Mecca, and that a lot of the people there were much the same as the ones she’d known at home. I also understood her frustration with her current situation, where she could no longer relate to her friends who now had children, but wasn’t sure that she wanted them herself, and felt trapped by others’ expectations of what she should be doing with her own life and body.

Zadie is a bit of a nightmare in that she always wants to be the centre of attention, she has a hell of a temper, her drinking and drug use are out of control, and she’s constantly distracting Chloe from her studies with wild parties and nights out, yet I still found her likeable and sympathetic. She comes out with some really wise and mature statements which I wish someone had said to me when I was that age, even if she struggles to apply them to herself.

It’s also clear that Zadie’s been struggling mentally for a long time, and I’d have liked to have seen a bit more of her backstory. I spent much of the book hoping that when she disappeared, it was to find a better way for herself. I could totally see why Chloe was so drawn to her - she’d never come across someone like her before in her life, and when Zadie was ‘up’, she offered a taste of a life less ordinary, and sounded fun to be around.

The main message of this novel, for me, was that people contain multitudes. While watching Chloe embark on an extreme plan of action in the present day, I was wondering ‘what are you doing here, where are you going with this?’, but this was because I desperately wanted to find out what her plan was, rather than thinking her actions were out of character based on what I’d seen of her up to that point. She was driven to extreme measures, as humans tend to be, by her trauma and sense of injustice.

Similarly, without giving too much away, there are ‘bad’ characters who display positive attributes, and ‘good’ characters who are revealed to have behaved incredibly badly. I’d have liked to have seen these ideas explored a little more, perhaps with additional elements, points of view or subplots, but I was nonetheless compelled to speed through the book, heart thumping, to get to the big reveal!

Two Wrongs is vivid and compelling, with interesting and complex characters. 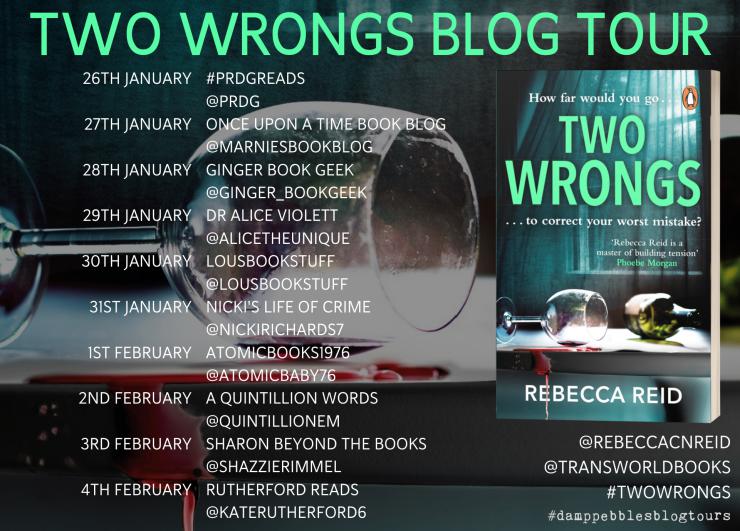