“In an all-too-possible near future, when genetic engineering has become the
norm for humans, parents are prepared to take incalculable risks to ensure that
their babies are perfect - altering genes that may cause illness, and more…

“Susan has been trying for a baby for years, and when an impulsive one-night
stand makes her dream come true, she’ll do anything to keep her daughter and
ensure her husband doesn’t find out… including the unthinkable. She believes
her secret is safe. For now.

“But as governments embark on a perilous genetic arms race and children around
the globe start experiencing a host of distressing symptoms – even taking their
own lives – something truly horrendous is unleashed. Because those children
have only one thing in common, and people are starting to ask questions…”

The events of Off Target, by Eve Smith, take place in Oxford just a few decades from now. There are effective measures against climate change, robots commonly provide assistance at home and in the workplace - and it’s routine to screen unborn babies’ genes for disease.

Screening for anything other than illness, as well as genetic alteration, is banned in the UK. However, when she gets pregnant with a man who isn’t her husband Steve, teacher Susan - desperate for a baby but unwilling to confess her mistake - gets in contact with a charming Ukrainian doctor. Dr Stakhovsky swaps Susan’s unborn child’s paternal DNA so it appears that Steve is the father, and edits out a few undesirable genes while they’re there.

The book is in two parts, both laced with tension. In the first part, we follow Susan as she gets pregnant and undergoes the procedure. Even though I already knew she would carry to term and have her baby, I still had my heart in my mouth when she was on the table because what she’d chosen to do was both risky and experimental.

She’s also put under stress when a campaigner against genetic engineering takes a photo of her outside a fertility clinic and threatens to post it online. Genetic screening may be commonplace, but it still has vociferous opponents who believe all life is precious and are against ‘playing God’, and they’re just as scary as some of today’s ‘pro-lifers’.

In the second part of the book, Susan’s daughter Zurel is 11 years old and troubled. She’s recently developed selective mutism, has started distancing herself from her mother, and resents having to undergo regular tests by a creepy doctor for a ‘survey’ Susan says they’re part of.

Having overheard something about herself, she worries about news stories concerning children in China who are experiencing an ‘off target’ effect of genetic alteration: extreme mental health problems. Meanwhile, the pro-life crowd has reached critical mass, and it’s not just the parents they’re after but the ‘abominations’ themselves.

I particularly enjoyed reading Zurel’s chapters, which explore the various thoughts and feelings that someone might have as they learn they’ve been modified. A couple that particularly stuck with me were her speculations that she might have been happier as the unmodified version of herself, but also that she might not have been treated in the same way by Susan and Steve if she hadn’t been edited. Her story also raised the question of who would be considered her father.

While I had some sympathy for Susan, ultimately I felt a lot more for Zurel, and a lot of affection for her too. This made the pro-lifers even scarier, as I didn’t want any harm to come to this character I knew and liked. This novel is wide-ranging and thorough, taking in a variety of implications of, and viewpoints on, genetic engineering at a time when it actually happens.

Off Target is a tense and heart-wrenching exploration of the possible consequences of genetic engineering. 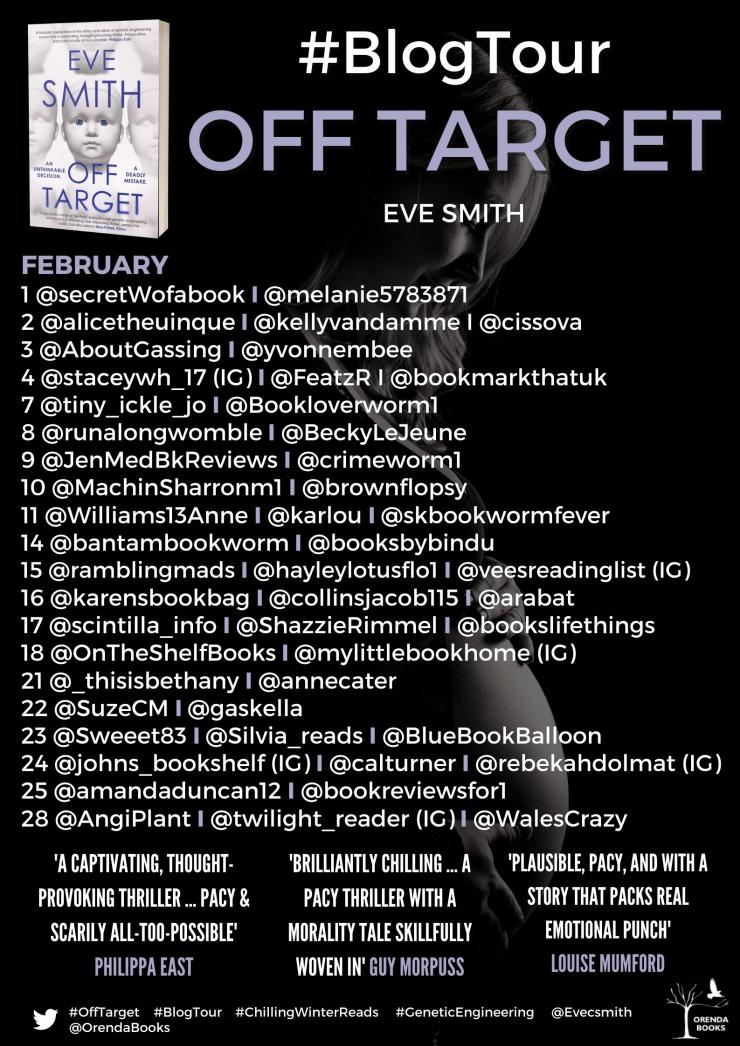