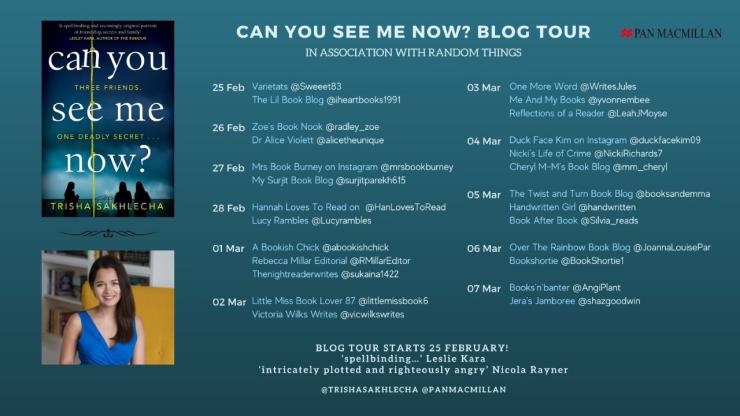 “Fifteen years ago, three sixteen-year-old girls meet at Wescott, an exclusive private school in India. Two, Sabah and Noor, are the most popular girls in their year. One, Alia, is a new arrival from England, who feels her happiness depends on their acceptance.

“Before she knows it, Sabah and Noor’s intoxicating world of privilege and intimacy opens up to Alia and, for the first time, after years of neglect from her parents, she feels she is exactly where, and with whom, she belongs.

“But with intimacy comes jealousy, and with privilege, resentment, and Alia finds that it only takes one night for her bright new world to shatter around her.

“Now Alia, a cabinet minister in the Indian government, is about to find her secrets have no intention of staying buried…” 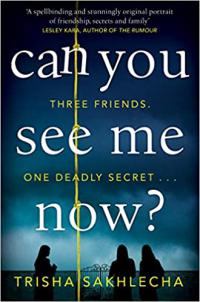 Can You See Me Now?, by Trisha Sakhlecha, contains multitudes. At its heart, it’s a mystery novel, as Alia and Sabah try to find out exactly what happened to their friend Noor one fateful night in their final year at school. But it also features a lot of political intrigue, and you get a glimpse into the life of a documentary-maker too, both of which I found really interesting.

Sakhlecha captures teenage life and friendship in all its intensity, brutality, and viciousness - I have no idea how anyone survives it! I could really relate to the teenage Alia, who has always felt like an outsider and grabs her one big opportunity to join the ‘in crowd’. Luckily, I didn’t go as far as Alia, who creates a whole new persona, betrays her personal values, and ignores warning signs about the falseness and fragility of her new friendships in her bid to fit in.

While the themes of power, privilege and the difficulties of being a teenager are universal, the novel’s Indian setting added something new for me. As a school, Wescott comes across as quite westernised in its culture, yet many of its rich students see nothing wrong with having servants and treating them like part of the wallpaper. Noor in particular is pulled between the permissive attitudes of her peers, and her family’s expectation that, as a Muslim girl as well as the daughter of an elite politician, she should behave in a certain way or risk bringing shame upon all of them.

I was really interested to read about the issues Alia is passionate about fighting for as an MP, such as justice for rape victims and the provision of refuges, as well as the way the electorate is largely divided along religious lines, but the different parties have to work together in order to command a majority (hints of Borgen there, I felt!). The themes of corruption, nepotism, and male entitlement also captured my attention.

The big event that changes everything has a long build-up, and while you know throughout that Alia and Sabah aren’t directly responsible for what happened, little details about their culpability are revealed as you go along. As for who’s directly responsible, you don’t find out until right at the end of the book - and there are many twists, red herrings, and bits of information that might or might turn out to be significant!

Can You See Me Now? is intense, interesting, and very twisty.