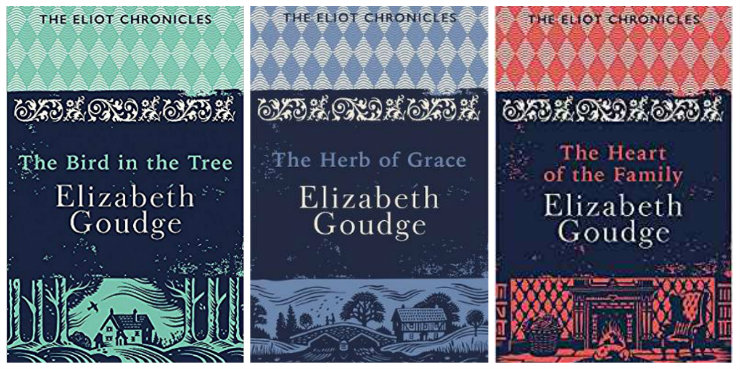 In some ways, the three books of Elizabeth Goudge’s Eliot Chronicles, The Bird in the Tree (1940), The Herb of Grace (1948), and The Heart of the Family (1953) are pretty dated. You have to steel yourself for a lot of ruminations about women being natural caregivers who love looking after their homes, husbands, and children, and some lengthy conversations between characters about the nature of God that invariably conclude that there is one. There are a couple of descriptions that make you uneasily wonder, ‘would this be construed as racist if was written today?’, and the language used to describe some (completely innocent) adult-child interactions sounds a bit dodgy to the modern reader. The sprawling Eliot family themselves are incredibly middle-class, and while they help waifs and strays who come into their orbit, their hospitality doesn’t extend to letting their children marry the help.

However, in a lot of ways, the series is actually surprisingly modern, and the wider society the Eliots inhabit is extremely relatable. Sure, the family seat, Damerosehay, is large, secluded and comfortable, but the widowed matriarch, Lucilla, buys it with the particular intention of turning it into a retreat from a hostile, turbulent world. This is because while the family are privileged, they are battered by the political turmoil of the early twentieth century. Throughout the books, Lucilla worries about how her grandchildren, particularly the less hardy, self-assured ones, will cope in a world where things have changed so much, are far less certain, than they were in her day.

The original residents of the house are Lucilla, her unmarried daughter Margaret (a ‘surplus woman’), a stalwart maid, and her small grandson David, who has lost both his parents. His father Maurice, Lucilla’s favourite of her many sons, died in the First World War, as did another, lesser-mentioned son, Roger. Lucilla is so successful in turning Damerosehay into a retreat that returning to it as a reader in the second and third books feels like slipping into a hot bath, even when she’s passed the reigns to a grown-up David and his family. This sensation is doubled in the third book as you also return to the eponymous Herb of Grace of the second book, an old pilgrims’ inn that becomes the home of another son, George, his wife Nadine, and their five children.

Both houses harbour curiosities - unusual wood panelling that turns out to have started life on a ship and a garden where ghosts of people who have died or grown up appear (Damerosehay) and a mural preserved under wallpaper and woodland where everyone has their own favourite place (the Herb of Grace) - which only adds to the sense of place in these novels.

A thread that runs through all three novels is that David, now an adult, has suffered a mental breakdown, and remains altered, as a result of his experiences in the Second World War. He is recognised by the other characters as a fragile and damaged man, and they talk to him with sympathy and understanding - it particularly stuck with me that he describes, at one point, how mental illness can be triggered by a complete shift in everything you thought you knew and would be fixed in place forever. His wife, Sally, feels that she can never fully know him because of his illness; for her part, despite a cheery nature, she always feels guilty because she has lived a charmed life and never known suffering like others - an early example of ‘checking your privilege’, perhaps?

While Goudge pontificates, through her characters, about the virtues of being a good wife and mother, and the pleasure and joy a woman gets from running a home, they are far from saints. In The Bird in the Tree, Nadine and George have separated, and Nadine is in a relationship with David - something Lucilla heavily disapproves of, even though, as we learn, she felt indifferent towards her own late husband for much of their marriage, and nearly ran off with someone else. Nevertheless, throughout the books, Goudge dislikes the wayward, unmaternal Nadine, even when she reunites with George and Lucilla manoeuvres them to buy the Herb of Grace.

Lucilla’s manipulation of the other characters is just one source of humour in the Eliot Chronicles; she’s so skilled at getting exactly what she wants, you can’t help but laugh. Her priest son, Hilary, and only daughter, Margaret, are also often a source of amusement; Hilary because he’s so stolid and set in his ways, yet charmingly at peace with himself and the world, and Margaret because of some of the crap she has to put up with from her mother, and her little rebellions such as buying a tea trolley Lucilla absolutely hates.

It’s the dogs and children, though, who are the real stars of the show. The four dogs who feature in the books are so imbued with personality, you can’t help but be uplifted when they’re in a scene. Goudge’s portrayal of the world through the different children’s eyes is so believable: cautious Ben, gung-ho Tommy, home-loving Caroline, the twins who live in their own world and take no notice of adults, old soul Meg, and fractious Robin - sometimes you wish the whole books were written from their points of view.

It helps my understanding and appreciation of the Eliot Chronicles that I know a fair bit about Goudge herself - I studied her autobiography, The Joy of the Snow, for my PhD thesis, and she was one of my favourite subjects. Her memoir was a really entertaining read, and I loved her observations of other people, her descriptions of her childhood homes, and how she clearly remembered what it was like to be a child, and her motivations for misbehaving - all of which feed into the Eliot Chronicles. Her father was the principal of a theological college, and she took a lot of courage and comfort from religion. She also experienced a mental breakdown in her twenties, and this surely informed her understanding of, and sympathy for, her characters with similar experiences.

It is a little strange, though, that Goudge reflects such reverence for women as wives, mothers and housekeepers when she didn’t get married or have children herself. She didn’t express any regret over this in her autobiography, so maybe her novels are a thinly-veiled expression of her actually yearning for those things, or perhaps a way of signalling that she was not a complete ‘deviant’ who outright rejected notions of women as maternal just because she wasn’t a mother.

The Eliot Chronicles portray a whole cast of different characters dealing with the upheaval people faced in the first few decades of the twentieth century. Over the course of the series, you see a number of characters grow into themselves, discover their talents and interests, and grapple with the obstacles that hold them back - including, sometimes, members of their family. At the same time, they’re warm and humorous and contain real insight into human nature. I will definitely be reading Goudge’s other books!