“When AA meetings make her want to drink more, alcoholic murderess Maeve sets up a group for psychopaths.

“Maeve has everything. A high-powered job, a beautiful home, a string of uncomplicated one-night encounters. She’s also an addict: a functioning alcoholic with a dependence on sex and an insatiable appetite for killing men.

“When she can’t find a support group to share her obsession, she creates her own. And Psychopaths Anonymous is born. Friends of Maeve.

“Now in a serious relationship, Maeve wants to keep the group a secret. But not everyone in the group adheres to the rules, and when a reckless member raises suspicions with the police, Maeve’s drinking spirals out of control. She needs to stop killing. She needs to close the group. But Maeve can’t seem to quit the things that are bad for her, including her new man…” 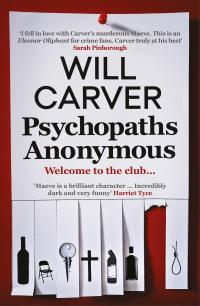 In Psychopaths Anonymous, by Will Carver, we follow psychopath Maeve as she mines AA meetings for human misery, sets up her own group for psychopaths like herself, kills the odd person and meticulously disposes of the evidence… oh, and goes to work, watches trashy TV and falls in love, tanked up on wine all the while. Maeve is intelligent, funny and insightful, so even though she’s objectively a terrible person, you can’t help but get swept along with her.

As we’ve come to expect from Carver, this is a very dark, no-holds-barred portrayal of the dark side of the human soul. Perhaps with the exception of her affection for her new beau, Maeve is given no redeeming features, and there’s no tragic past or over-arching twisted moral crusade guiding her actions - she screws with people and murders them mostly because it amuses her. Sometimes you’ll think she’s being genuinely nice to a character, only to realise she had a different plan for them all along. Even so, she is a deep thinker who makes some astute observations you can’t help but agree with, even if the actions she draws from them are less savoury!

The multiple AA groups Maeve attends, and the one she sets up for psychopaths, means the novel is populated by a whole range of flawed characters, allowing the author to explore a variety of dark behaviours and ways of being an alcoholic or a psychopath. While Maeve has nothing but disdain for the alcoholics, wherever they’re at in their journey, she has more respect for her fellow psychopaths, and they’re the only characters she is truly herself with, making for some especially entertaining interactions.

If Maeve’s name seems familiar, it’s because she’s Seth’s wife in Good Samaritans. It was not only really interesting to get her rather unusual backstory (which explains why she helps Seth the way she does in Good Samaritans), but to find out how it all began for the pair, even it is a little sad to compare the state of their relationship across the two books. There’s also a small cameo from one of the residents of The Beresford, and I may well come to understand additional references as I continue to make my way through Carver’s back catalogue!

Psychopaths Anonymous is another delightfully dark and disturbing creation from a highly inventive author.