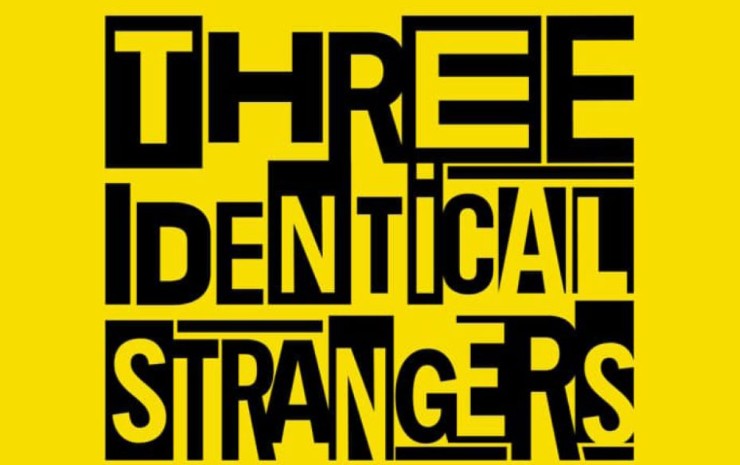 Is ‘PhD archive’ really the right name for this section of my site when I still keep thinking of things I want to add to it?

Anyway, last night I watched Three Identical Strangers on Kanopy with my library card, and it was quite an experience. This shocking and heartbreaking documentary tells the story of Bobby, David and Eddy, a set of triplets adopted separately without their or their adoptive families’ knowledge. They discovered one another completely by chance when they were 19, in 1980, and got caught up in a media frenzy, appearing on TV and essentially becoming celebrities.

For a while, they had the absolute time of their lives, but their families naturally had questions. It emerged that not only had their adoption agency concealed the fact that they had been triplets, but that they had deliberately placed them in families with different socio-economic statuses and parenting styles, and lied about the purpose of the periodic home visits where researchers would test and observe the children - they were using the triplets, and other unknowingly separated multiples, to discover the importance of nature and nurture.

Essentially, the triplets’ entire lives had been one big experiment - and not even one where any conclusions were drawn or published in the end. The triplets’ instant relationship began to unravel as they came to know each other for the first time as adults. Eddy was diagnosed with bipolar disorder and ended up taking his own life, and it was clear that Bobby and David were hugely affected by how they were manipulated and used right from birth.

As one of the relatives interviewed for the documentary remarked, everyone asked what the triplets had in common, but nobody asked what made them different from one another, making it seem at first that nature had clearly beaten nurture.

When they appeared in the media, TV presenters and journalists emphasised that Bobby, David and Eddy all smoked the same brand of cigarettes, had been boxers as teenagers, and preferred older women. Nobody asked them why, though. Maybe Marlboros were especially affordable and/or marketed to young men at that time?

What reasons did each of them have for taking up boxing - was it a particularly popular/subsidised sport in their area, were one or more of them encouraged to take it up by someone who thought they would be good at it, were one or more of them being bullied and looking for a way to fight back? Could their thing for older women be explained by the fact that they knew they were adopted?

Ultimately, though, participants in the documentary suggested the triplets’ relationships with their adoptive parents had particular influence over the differences between them. Their relationships with their fathers in particular came under scrutiny; Bobby’s father was a larger-than-life character and very much a hands-on parent, whereas at the other extreme, Eddy’s father was distant and hands-off, apart from when it came to discipline, and it was suggested that this contributed to Eddy’s deep unhappiness.

These aspects of the film really put me in mind of my own research methods and findings. When I was analysing only children’s testimonies, I was determined to go in (as far as humanly possible) with an open mind as to whether they would turn out to fit stereotypes or not. I also questioned, at every turn, whether, when they did turn out to fit the stereotypes or have similar experiences to one another, it was because they were only children, or for some other reason.

The attitudes of parents came up as an explanatory factor most often. They determined whether only children felt welcome, wanted and comfortable in their own homes, whether they had opportunities to meet and befriend other children, whether they were overprotected and/or spoiled (reasons for this could be that their parents had lost a previous child, or wanted to give them the childhood they hadn’t had themselves) or not (some parents were so concerned about the idea that only children were spoiled, and how a spoiled child would reflect on them, that they were overly-strict)… and those are just examples I can think of from the top of my head!

As well as being a fascinating and emotive documentary, Three Identical Strangers and its popularity among viewers made me think that maybe my thesis is more interesting and relevant to people than I always assume. Still not going to write a book without adequate renumeration, though…