I submitted my completely rewritten thesis this morning, right on the deadline. For 8 months I gave most of my weekends, a chunk of my annual leave, and some evenings to writing. It culminated in me reading the whole thing through for most of yesterday before diving into bed with a splitting headache.

My main feeling is relief. I got it done. Eight months ago, I was on the verge of quitting because I felt there was no way I could possibly do it. I’m pleased that I did manage it, but that’s tempered by the feeling that it would have been totally fine to quit - I only didn’t because I’d have still had to pay £250 for a term that had started - as well as the feeling that I’ve now ‘put myself out there’ by resubmitting it to the examiners, who weren’t impressed by it last time.

I can tell it’s better than my first submission. I read the original now and think, ‘wow, that was a bit crap really,’ and have to remind myself that if I’d known it wasn’t good enough then, I wouldn’t have submitted it. There’s stuff I wanted to add but didn’t have time to do, and I have acknowledged that within the thesis. I think I’ve addressed the examiners’ comments. I’m still anxious as hell about having a second viva because I know how badly it can go wrong, and I just can’t trust that what I’ve done is worthy of a PhD.

My experience of resubmitting has been very different to submitting the first time. Last time, I finished my thesis a bit before the deadline and had time to proofread it with fresh eyes. I even got it printed a couple of days before submitting. As I mentioned above, this time I finished my final read-through at 9pm the day before submitting, and got it printed on the day. I roped in a load of kind friends to give my chapters a read a week or so before it was due. Even if I had finished earlier, I wouldn’t have been able to print it ahead of time because I had work.

When I submitted before, I felt elated, though it also felt kind of anticlimactic. Nonetheless, I basically spent three days eating and drinking everything in sight. This time, I’m looking forward to spending the afternoon with a book, maybe having a nap, going for a meal, seeing a play in a library (not the one I work at, but you can see something by yours truly about the play here, and I might also have a bath. It’s all very civilised. Well, I do have work tomorrow. And every weekday until Easter, because I have one day of annual leave left in this financial year and I have to keep it aside in case my viva is in March.

Having work is another difference between this time and the last. When I submitted before, I didn’t know what was coming next. I spent most of the three months between submitting and viva looking and applying for jobs, and getting work experience, before securing a position a couple of weeks before my viva. Although I hope to try to progress in my career at some point, I don’t want to start looking form my next job until I know what’s going on with my PhD. I’m happy to just ‘be’ for however long it is until all this is over, doing the job I’m settled into and not spending my spare time on anything too onerous.

Another difference, as I’ve already indicated, is how I feel about the viva. Last time, nobody suggested that anything untoward would happen. I felt as though it would be a nice chat about my work, and just a formality really. I didn’t expect there to be so much criticism of my work. I’m going to be anxious as hell this time around, but if it’s horrible, at least it won’t be as much of a shock. Hopefully.

Even if I still don’t pass (so I keep telling myself), unlike last time, getting a PhD doesn’t seem like the be-all and end-all. Yeah, I’ll be very annoyed that I spent more than 4 years on it, and ~£900 trying to fix it. It might be hard not to beat myself up about being a failure at least for a bit, and I’d probably need some professional help dealing with that. But, from working in a different area for more than a year, I’ll know it’s not the end of the world. I don’t need a PhD for the sort of work I want to do. I think it’s more important to my future, for example, that I now have substantial experience of working in an office. But I would, ideally, like to have something to show for all the money, time, and effort I put into it.

A final difference? My acknowledgements are longer this time. I’ve got so many people cheering me on. When I got referred, I didn’t do anything on social media for days because I was scared of how people would react to the fact my work wasn’t ‘good enough’ to pass. But I’ve had so much support from everyone, and it’s made me feel so much better. Thank you all so much. 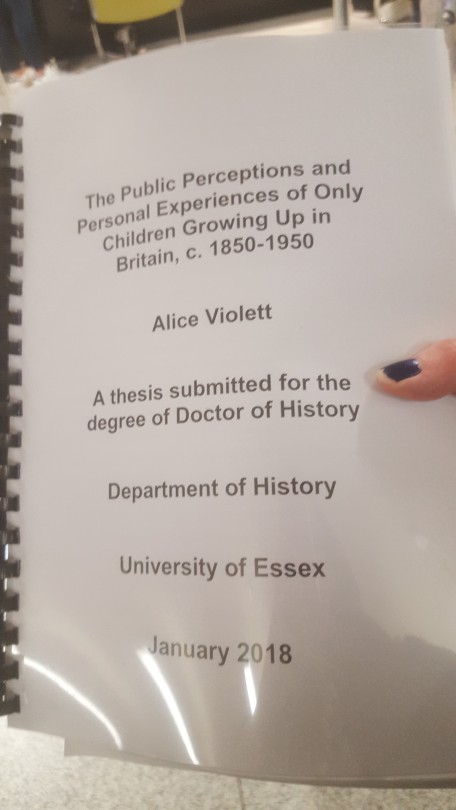