A bit of a ruckus has arisen of late about what academics wear, with articles such as this and this getting a lot of attention.  So naturally, I started thinking more about what I wear, and whether there seem to be dress codes, and whether or not other people are thinking maybe a little too much about this issue.

Going by the articles, I think historians are under less pressure to dress a certain way than academics from other disciplines.  I’ve certainly never felt the need to wear a sharp suit to a conference or for teaching, and I’m not sure if I would even go that far for an academic interview - maybe a nice shirt and a smart skirt or trousers.  At a history conference you’ll see a wide range of styles, although I’ve only ever seen men wear jeans and t-shirts at them.  I did once consider it myself - I thought about wearing my Marcie t-shirt so people from Twitter would identify me - but the thing I like about conferences is the chance to dress up, and I don’t know if that’s a gender thing or not (I’ll come back to that in a bit).  I don’t think anyone would really be put out by it.  In her article, Francesca Stavrakopoulou mentions how women in her field are recommended to wear clothes that attract no attention whatsoever - whereas I’ve been given the opposite advice by a colleague, who told me that historians wear standout accessories so that when there are a load of people at a conference, you can remember new people better! 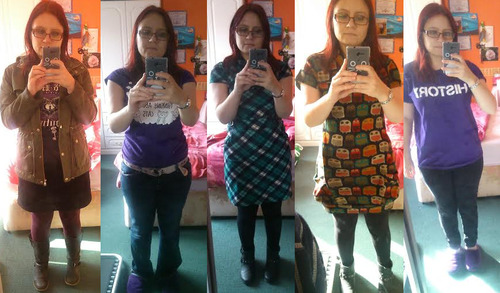 As a bit of an experiment, this baby academic took selfies every working day this week to show what I wear (I know I’m not the thinnest person in the world, LOOK AT THE CLOTHES DAMMIT).  As you can see, on Monday, Tuesday and today I’ve been pretty casual, and that’s because I’ve mostly been working from home - on Monday I popped out for lunch, but on Tuesday and today I didn’t go out/don’t plan to go out (other than for the gym before I got dressed in ‘proper’ clothes), hence the slippers. Slippers aside, this is the type of thing I would wear to the library or department when I need to study on campus.

On Wednesday and Thursday, I was teaching.  I like to ‘dress up’ a bit for teaching.  That’s not because our department has any written rules about it, and I have colleagues who teach in more casual clothes, and that’s absolutely fine.  It’s not about placing myself above the students really.  It’s more that, because I wear casual clothes so much of the time for days when I’m just reading and writing, it’s nice to have an excuse to wear ‘nicer’ clothes.  I’m not sure if this is a gender thing when there might be men out there who like dressing up a bit when they’re teaching for the same reason.  The same goes for conferences - they’re a convenient opportunity for me to wear ‘nice’ clothes as they’re ‘official’ events, and aside from aesthetic interest (I am susceptible to shoe and dress envy!), it doesn’t bother me what other people choose to wear to them.  I actually wore Wednesday’s outfit to the conference I spoke at last week.  I do wear heels sometimes (but I only find the chunky 90s-school-shoe style tolerably comfortable), but I don’t feel obliged to because I’m a woman.  In the same vein, I only really wear lipstick on special occasions, not because I feel it’s necessary for a woman to do so, but because it’s a treat when there’s so little point wearing it to just sit at home or in the library with a book.  Is this the result of some ingrained social conditioning?  I have absolutely no idea.  I just want to feel reasonably attactive when I go places (to myself rather than other people, compliments just make me feel awkward), and like I’ve made an effort.

Unless I undergo a complete change in personal style preferences, these are the types of clothes I would wear every day if I became a proper academic - or, for that matter, worked anywhere that called for a smart casual look.  I’m not sure that debates over workwear, especially how women dress, are that particular to academia.

I actually gave a presentation to my students this week about how to do a good presentation.  I had a section about appearance in which I told them that I don’t like telling people what to wear any more than I like being told what to wear (I would feel very affronted if someone told me to tie my hair back like in the article, not least because I personally hate how I look with my hair tied back and would not feel confident!), as long as they assess the occasion.  It’s common sense, though, that you wouldn’t wear pyjamas to a job interview, for instance, and wearing a t-shirt with a provocative slogan is fine on a normal day, but not when everyone’s going to be looking at you and trying to concentrate on what you’re saying.  But the world would be extremely boring to look at if everyone dressed the same.