This week I went up to the University of Northumbria, in Newcastle, for the annual Social History Society conference.  It was a long way to go, but I heard some really interesting talks and got a lot out of it.

For various dull reasons, I could only do the second and third days of the conference, but I nonetheless attended talks under the umbrella of three different strands, namely Life-cycles and Life-styles, Narratives, Emotions and the Self, and Spaces and Places.  There were seven strands to choose from in total for each session, and on a couple of occasions it was a real struggle to decide which panel to go to!  I’m going to quickly (or as quickly as I can!) list every talk I listened to, then go into a bit more detail some things I learned from a few talks that particularly grabbed me in relation to my own work.  Everyone I saw was great, though - they all spoke clearly, their talks had a clear structure, they referred to other historians’ work and I was inspired by the way they used Powerpoint for pictures and quotes rather than every single point - all things I would like to do when my turn comes to speak - hopefully next year in Portsmouth!  I saw:

So quite a few talks then.  I think my favourite was Sian Pooley’s paper about the children’s pages of newspapers - aside from just being really, really interesting in itself, it got my attention because of my own work on what late 19th/early 20th century adults thought children were meant to be like, and revealed a whole new potential source to me.  Pooley mentioned that siblinghood was a main feature of the letters children sent to the fictional relative - usually an uncle, occasionally a father - the adult editors of these pages were represented as, prompting me to ask whether only children featured in these pages, to which Pooley responded that they did, and that they commonly represented themselves as somehow ‘crippled’ or ‘missing something’, as siblinghood was a very important part of the ideal conception of children.  Exciting!

Christian Bailey’s paper raised issues with diaries and autobiographies I hadn’t come across before, particularly that many diaries conform to a sort of ‘model’; for example, in the case of young people, they were written under the instruction of a teacher or governess, while autobiographies are written from a place of ‘safety’ - that is, the writer has got past the difficulties they experienced.  Both sources can be hampered by awareness of an audience - autobiographies in the obvious way, but diaries in that the author fears someone might read the diary - as Bailey commented, the ideal diary is the secret one the author wrote for themselves and that really should have been burned!

Ciara Meehan’s paper was about agony aunts in Irish magazines, a topic I knew nothing about whatsoever but really interested me.  She discussed how the letters women wrote changed from ‘should I do this?’ to ‘I have done this, what do I do next?’ and the advice given to them changed from ‘this is what good Catholics do’ to more liberal advice that encouraged the writers not to conform to society’s mores over her time period.  Advice columns may well turn out to be a port of call for me in my research, so it was useful to come across this way of looking at them.

Moving onto the third (second for me) day, Sian Edwards’ paper was a great way to start the day.  Again, education about courtship in the girl guides in the 1950s was something I had never thought about before, but I found it utterly fascinating to hear about.  Although a little after my time period, I found it interesting to hear about a story in the Guide magazine wherein a girl was teased for her lack of confidence with the opposite sex, linking back to what I keep reading in manuals and mass observers’ opinions that having siblings of the opposite sex is good training for mixing with men or women in later life.  In the 1950s, guiders were encouraged to put on events where boys and girls mixed - partly to encourage friendships, but also to attract members who wanted to meet boys and were previously put off by the lack thereof.

Grete Swensen’s paper raised an important point about empathy in historical studies, and how this differers from sympathy - empathy is looking for and understanding feelings in historical documents, but you don’t necessarily have to sympathise with the person - in her case, some of her subjects had committed upsetting crimes, making it impossible for her to sympathise with them or distance herself from them.  I was reminded of the film club session last week, when I was asked if I could relate to the only children I studied.  I said ‘not all of them’ because of their diversity of family backgrounds alien to my own - but I could understand why they felt how they did given their circumstances.  I guess that’s a similar thing, but on a way lighter level.

**Laura Tisdall’s **paper, the last one in the Narratives strand, was just generally useful - again, outside of my time period, but it helped clarify for me the different views of contemporary child development theorists.  I find literature on the subject particularly thick, so it felt like I’d been given a nice way in to the ideas of Jean Piaget, Bärbel Inhelder, John Bowlby and Willian Grey Walter.

A few other notes on attending my first ‘big’ conference now.  I went with my friend and mentor (I hope she doesn’t mind me calling her that for showing me the ropes and giving me lots of tips!) Vicky Holmes, who really helped me by introducing me to people and sitting with me at the conference dinner - I’m one of those people who’s fine at talking once they’ve been introduced but finds it a struggle to start talking to new people cold.  She was quite surprised that I asked questions at my first conference, as she wouldn’t have done at my stage, whereas I didn’t see it as too big a deal.  She was also pleased that I chose which sessions I wanted to go to rather than just clinging to her for dear life, which again I hadn’t really thought of doing.  Possibly doing my own talk next year though - that’s scary!  Everyone seemed so articulate and knowledgeable and I hope I can match that!  I also took the opportunity to chat to a few of the publishers who had stands there.  By the looks of things, it is very possible for someone with a PhD to go into publishing, but I’m likely to have to do an internship to stand out from the crowd - something to think about in the third of fourth year there.

More generally, it was nice to go to a city I hadn’t been to before - I’m very much a ‘city break’ type of person, I like to go to places with lots of life and things to do.  I must admit for most of my meals I did go to chains - Pizza Express, which we have at home, and TGI Friday’s, which we don’t, but I also had some lovely carrot cake at a café, Blake’s, at the suggestion of one of my Twitter friends - otherwise I might have panicked and just gone to one of the many Costas!  The Intu Centre is definitely the most confusingly laid-out shopping centre I have ever visited, but I was very impressed by the size of Newcastle’s HMV and spent all my change on the pinball machines in the basement.  Looking forward to seeing what Portsmouth has to offer next year! 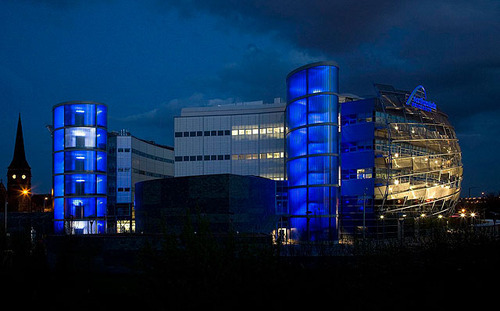