This week I made my annual trek to the Social History Society Conference, which has become a highlight in my calendar.  I always look forward to two and a half days of interesting talks and friendly people, as well as the chance to visit a new place, and this year the conference excelled itself.  I spoke on two panels (a ‘traditional’ paper for one, and helping lead a discussion for the other other), and chaired two.  As I had to miss the first panel due to travelling up, I only had ‘free choice’ for two panels, but that did cut down on some potentially difficult decision-making!  There are often loads of panels on at once that I’d like to go to, and I always wish I had Hermione’s time-turner so I could see everyone I wanted to.

Rather than write about every single paper I attended, as that would be a long read, as ever I will pick out the ones that were most relevant to me/my research.  I hasten to add that all the papers I saw were excellent, and I will provide a list of all the ones I heard at the end of this post.

My conference got off to a great start with Lisa Dallavalle’s paper, ‘Evolving Family Relations: Family Dynamics in the Dering Family (1625-1684)’.  Dallavalle described the changing family relationships of Sir Edward Dering.  Although Sir Edward experienced some legal wrangling over his inheritance with his stepmother, Unton, when this was not going on they appeared to get along well.  This particularly manifested itself in his relationships with his half-siblings; although he appeared to become more distanced from them as they grew older, he had particular involvement in the affairs of his half-brother Henry, helping to pay off his debts and even taking on his wife and child for a time.  As for Edward’s own children, we heard how Edward and his wife, Mary, remained involved in their children’s lives even after they left home, and retained their hierarchical position, albeit adapted to individual situations.  When they looked after their grandchildren while their daughter and her husband were abroad, for example, they consulted their daughter about how to bring them up, thus respecting her authority as a mother despite their superior position in the family.  This paper interested me because my work also shows how parent-child, as well as other family relationships did not stay the same, although that’s the part I may end up deleting and turning into an article!

Another talk that particularly resonated with me was James Stark’s ‘The Age of Youth: Everyday Rejuvination in Interwar Britain’.  Stark described how, between the wars, there was a particular concern with anti-ageing, which, like concerns with the birth rate and health of children (which I deal with), was part of a general worry about Britons’ vitality and suitability to survive the ‘age of anxiety’.  Consumer electrical and hormonal treatments not only came into existence, but were marketed in certain ways to play on the concerns of men and women.  Stark’s discussion of electricity and the body particularly interested me because, as I wrote in my last post, I’ve been trying to find a book that describes the nineteenth-century notion of the ‘electric body’.  Needless to say, I collared him afterwards to ask him what I could read!

Ruth Easingwood’s paper ‘On being a High School girl: working class desires and self-realization in post war Britain‘ interested me on a more personal level.  Easingwood described her findings from interviews with her cousin Janet, who went to grammar school soon after the shift to the grammar school/secondary modern system.  While Janet’s family presented her as this great scholar who had passed the 11+ and would be financially better-off as a result, her presentation of herself was based more around her enjoyment of school sports and playing practical jokes on the teachers!  I was particularly interested in the class element of Janet’s story.  Although she was self-conscious because some bits of her school uniform were home-made, at the same time it wasn’t so bad because there were other girls in the same situation.  Overall, it seems as though grammar school (leaving aside the grave problems of judging children of 11) in those days was much more inclusive of working-class students and better for social mobility than it is now.  Working-class students were very much a minority at my school, likely due to the ability of better-off parents to pay for 11+ tutoring, as well as having to pay for lots of uniform (an experience Janet also had) and transport (tip to the government: if you’re going to bring back grammar schools, they’re going to be middle-class enclaves if you continue to only have free transport to the nearest catchment school).  I’m pretty sure anyone with an obviously home-made uniform would have been ostracised.  I’m always interested in reading histories of people who went to grammar schools because of my own experiences - maybe I should take on the job myself!

I was also really interested in Philippa Lewis’ paper, ‘Embodying emotions: the history of timidity in fin-de-siècle France’, as I have researched shyness and timidity in only children.  At this time, shyness came to be understood medically, rather than morally; I found the ‘moral’ ideas surrounding shyness really interesting.  One writer, Ludovic Dugars, mixed the two interpretations by describing how someone who was shy on enough occasions for it to become ‘part of them’ lacked morality because they were unable to emphathise with others, and thus exercised harsh judgments on people’s actions.  The church also saw a certain amount of shyness as immoral because a shy person was too self-concerned.  Dugas and another contemporary writer, Paul Hartenberg, were particularly concerned with shy men, again tapping into the concern with wider societal problems: sterility, morbidity, and death.  Additionally, the shy male body, lacking presence, did not live up to masculine ideals.  For children, shyness was seen as more acceptable, but something they were expected to get over as they learned self-control.  Only children, as I have found, were supposed to be shy beyond this stage, explaining the concern that they would not make for good members of society as adults!

As the University of Lancaster is a campus university, I didn’t get to see very much of Lancaster itself; the last couple of years I was in city centres so it was easier to explore.  The campus was really nice, though.  Although it was basic, as to be expected, I liked my room in the halls (once I found it), and it was very convenient both for the buildings where the conference was held and the venue for the conference meals.  The food was better than the last two years - especially the cream cakes and desserts!  I talked to lots of people, including my undergraduate tutor, who I hadn’t seen for years!  I think interacting with lots of historians on Twitter, and having met so many people at previous conferences, has really benefitted me, as I’m no longer sitting around awkwardly at lunchtime or coming out of dinner/the conference itself thinking that I didn’t really talk to anyone.  I would love to keep going to conferences, especially SHS, despite no longer being in academia - I look forward to this conference every year, and it never disappoints. 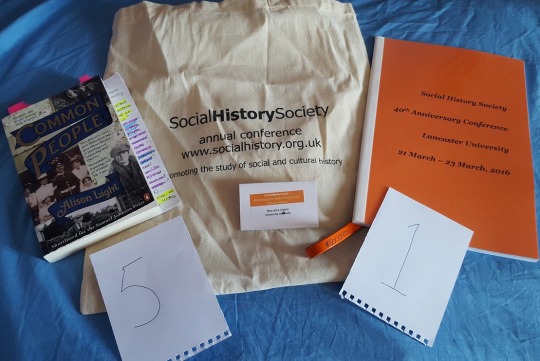 Helen Rogers, Simon Briercliffe and me in the room, Will Pooley and Alison Twells on Twitter - will blog about this next week!

Self, Senses & Emotions: Science, subjectivity and emotions in the nineteenth century: