The methodology.  You’d think that once you’d done most of the work, it would be pretty easy to write.  After all, you’re writing about things you did.  It’s not like the sources section, where you have to read what other people have said about and done with the sources.  You can say ‘I did this, these were the problems, here’s a nice table’.  It’s the ‘these were the problems’ part, though, that is a massive pain.  It shows your research wasn’t perfect, because there’s no such thing as perfect research.  Research is messy.

In case it wasn’t already obvious, I had a bash at writing the methodology for the part of my thesis about oral histories and autobiographies this week.  Some of the problems I had to flag up were things I’d been aware of all along.  Others arose when I made up a table to show the sexes, birth decades and social classes of my subjects and make me think ‘ah’.

I’d known all along, for example, that there was a lot of variation in the usefulness of the autobiographies and oral history interviews I read/listened to.  Some autobiographies - often those of men involved in politics - have frustratingly small sections about childhood, so I couldn’t get much from them.  The same goes for oral histories - I used interviews from a variety of past projects, so some naturally concentrated a lot more on childhood than others.  I still have plenty of material, it just shows that not every life-story source is the same and you can’t definitively say at the beginning ‘I’m going to look at X, Y and Z’, because Y might be totally useless.  On the other hand, I had a few autobiographies that were totally about childhood, which were full of useful stuff but risked getting a disproportionate amount of attention as a result.  Not all sources are born equal, and autobiographies in particular show a huge variance.

There were a few other things I’d noticed when I was researching these sources that I had to mention in the methodology.  One was how I actually defined an only child - rather than having a set definition originally, I tended to judge each case on its individual merits and decide to use it accordingly, and I put the resulting policy into words in this way:

‘Broadly speaking, an only child was decided to be a person who either had never had any siblings of any kind, had step- or half-siblings who had never co-resided with them, or had lost an older or younger sibling they had either never known or only known for a short amount of time (defined as roughly two or three years at the most).’ > >

I also mentioned that some people in the ODNB were misdescribed as only children - a massive pain when I ordered an autobiography only to find its author writing about siblings!  Another problem was that not all oral history interviewers were of an equal standard - sometimes it was frustrating when they missed the chance to ask a follow-up question I wanted the answer to.

More problems I needed to address popped up when I made the following table: 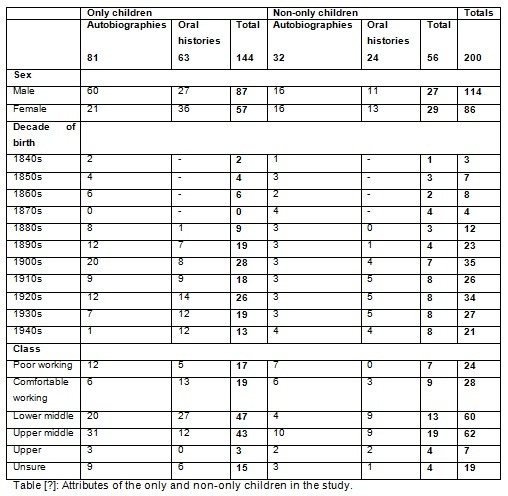 Believe it or not, I actually tried to have equal numbers of men and women’s oral histories.  With the autobiographies, I just read everything I could get my hands on, so of course there were more men.  I picked and chose from the oral histories in the British Library so I had about the same number of men and women.  Then I read Paul Thompson’s Edwardians transcripts of interviews with only children and the balance went.  Gah!  Currently telling myself the overall over-representation of men is okay because women were likely to talk/write more about childhood.  But the best-laid plans, etc., etc.

Naturally, I have a lot of middle class people, but I was pleasantly surprised to have such a balance between lower- and upper- middle class.  I was worried I would have a very disproportionate number of upper-middles, and with the autobiographies I did, but the oral histories made up for that.  Working-class numbers are lower, but not too shabby.

As for birth decade, I’m not sure what difference the variation in numbers will make.  It is a bit alarming that I couldn’t find any autobiographies of only-child autobiographers born in the 1870s.  But it is good that I’ve got a healthy number of people who experienced the wars - I want to know what effect war had on the lives of only children.

I also put this rather nice table in just because I didn’t know where else it could go.  As I said, methodologies are hard: 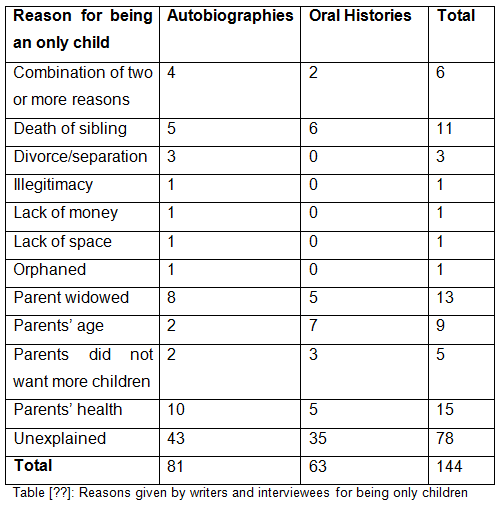 Also available here if it shows up too small. Show me the meaning of being only!

So basically, most people didn’t say why they were an only, perhaps due to reticence/protecting their parents, not being asked, never having asked their parents, or not thinking it was a relevant/interesting to say/write.  But, of those who did say, it seems that most weren’t onlies by choice.

That done, hopefully I can move onto meaty analysis stuff.  Fingers crossed! 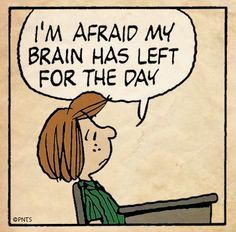