A bit of a break from my normal blog routine this week as I went to the abovementioned conference on Saturday but also want to post a book review on Friday.  I didn’t speak at the conference as I couldn’t think of a non-tortured way to get my research to fit the theme, but I found a lot to interest me, but it was lovely to be able to enjoy the conference and not have to worry about giving a paper.  As usual, all the papers were interesting, but I’ll talk about the ones that really stood out to me personally to avoid a massive post (also, there were parallel sessions so I naturally only saw half the papers anyway!).  It was a very interdisciplinary conference, so I felt like my brain was given a good workout!

Three papers interested me because of their image of the child as a ‘future adult’.  The first of these was the keynote by Matthew Daniel Eddy, about Scottish children’s writing during/after the Enlightenment.  Scottish educationalists rather literally followed Locke’s theory that childen were ‘blank slates’ by getting them to write a lot - both copying existing texts and reflectively in diaries, and the theory of this was that it would prepare them for adulthood by instilling in them the moral lessons in the passages they had to copy out and improving their minds by discovering their characters through personal writing.  The second was a joint paper between Laura King, Vicky Crewe and Lindsey Dodd about their Children of the Future project - each of them is using a case study to show how children were regarded as ‘the future’ in a certain historical period - be it through advertising to adults, toys relating to adult occupations, or promotion of the military and national pride to them through marketing and toys.  The third was Laura Sefton’s paper on bank accounts marketed to children - in particular, the idea that banks aimed to hook lifelong customers at an early age (I must admit, I’m still with the same bank I had my first account with…).  These papers really interested me because of the link to my own research - the idea that being an only child became an issue when people started thinking environment, rather than innate ‘goodness’, determined adult personality, and, linked to that, the advice to parents to have more than one child, or be careful bringing up the only child they had, lest they end up producing a selfish, unhappy, or even insane adult.

I was attracted by Sara Hiorns’ work on diplomats’ children’s experiences at a previous conference - particularly their relationships with their parents and siblings, and feeling ‘different’ to other children in boarding schools in England - and her talk at Greenwich was just as captivating.  She talked about a family magazine, the ‘Double J’, produced by John and Jenny, the young son and daughter of a diplomat over a number of years while they were children.  Besides the source just generally being amazing and unusual, it reveals a lot about family life - particularly the affection and admiration the children had for their father, and the fun they had with him, which was a contrast to the image of the formal, distant father.  This is another thing I can relate to my own research - the sheer variety of types of relationship my subjects had with their parents.

Also interesting to me was Shaul Bar-Haim’s paper about anthropologist Geza Roheim’s early twentieth-century study of Aboriginal Australians.  Roheim refuted the idea that these indigenous people were ‘savage’, instead saying ‘civilised’ societies could learn from their childrearing practices; Aboriginal children were neurosis-free because their mothers did not force them off the breast until they wanted to be weaned, and indulged them instead of thwarting their desires.  The latter really enthralled me, given the contemporary discourse about spoiling - while western parents were told not to spoil their children because it would give them unrealistic expectations, Roheim observed that, because their mothers didn’t frustrate them by refusing to give them what they asked for, Aboriginal children were better able to cope with difficulties in life and less anxious.  According to Roheim, totalitarianism can be prevented by the belief that you’ll always get what you want!

Melinda Blos-Jani’s paper on ‘home movies as artificial bodies of childhood’ was far from my research area, but I found it so interesting I’m going to talk about it anyway.  Blos-Jani argued that home videos of children aren’t ‘naturalistic’ because the children might be directed to do something by their parents, and look at and engage with the person behind the camera - even babies look in that direction if there’s someone to look at out-of-shot.  Although my family never had a camcorder, I was always excited if I was at someone else’s house and a parent recorded us - and acted totally unlike my ‘normal’ self in front of the camera!

I’d never been to Greenwich University (or even Greenwich, for that matter) before and was struck by the beauty and grandness of it, though it took me a while to find the room I needed to be in, and because of all the courtyards I kept finding myself outside whenever I went through what I thought might be the right door! 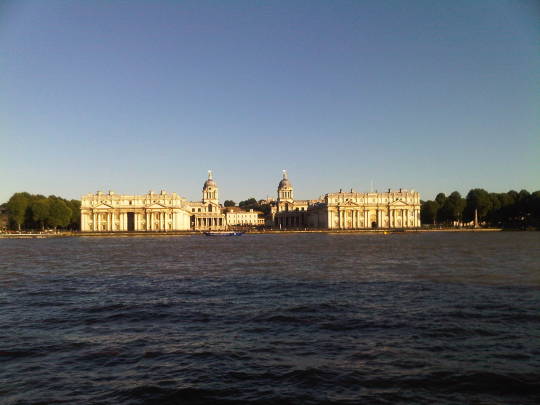