Last time I blogged (and despite me giving it minimal pluggage, that blog post REALLY took off - thanks to all who read, shared and messaged me), I’d been referred for my PhD after a difficult viva and was broken but hoping that once I received my report, an appeal would change the outcome.

Alas, things are not a lot better now.

I got the report on October 26th, and you know what? Despite everything in the viva seeming very negative to me, the corrections suggested didn’t look that bad. I didn’t have any objections to the changes themselves, even though I’m not exactly looking forward to all the editing. If I’d received that set of changes with a pass with major corrections, I’d be practically raring to go. My examiners suggested that they believed I could make the changes, and within a year, and they referred me so that I had less time pressure to do it.

Unfortunately, as I literally only found out when I received the report, a referral also confers completion year fees. Talk about kicking someone when they’re down, central administration. Not only at no point before I had my viva did anyone suggest that I might not pass, but there was never any mention of extra fees.

My main reason for appeal was so that I wouldn’t have to pay to complete a PhD I’ve fallen dramatically out of love with. Of course, I couldn’t actually say that, so I made the argument that while I was fine with the corrections, I thought they were more suited to the class of pass with major corrections. And, to be fair, even without the whole money thing, I would have more confidence and enthusiasm going forwards if I’d actually passed.

I didn’t win my appeal.

It turns out there are only really two grounds for appeal: incorrect examination procedures, and prejudice/bias. As I was appealing against academic judgement, I had no chance basically. This brings me back to the whole feeling that academia is messed up - that you can put all that work in for three years and then you’re totally at the mercy of two people who haven’t been there for those three years. In essence, ‘academic judgement’ is untouchable.

So, it looks like I’m just going to have to suck it up, pay my money and get on with finishing my doctorate. I’m hoping to get my fees for this term waived as I haven’t been able to do any work (not sure who hasn’t sent it as things have to go through the registry, but I haven’t had a reading list I’m meant to have or any communication from my examiners), but this is still going to cost me at least £645 I would much rather spend on something else.

Why am I doing this?

That is literally it.

Somehow, those reasons outweigh all these reasons not to bother. Quality over quantity, I guess:

I have twice as many reasons ‘against’ as I do ‘for’. But nonetheless, last weekend I started a new, dedicated notebook. It’s one I got in a self-care subscription box, and pretty fitting, actually: 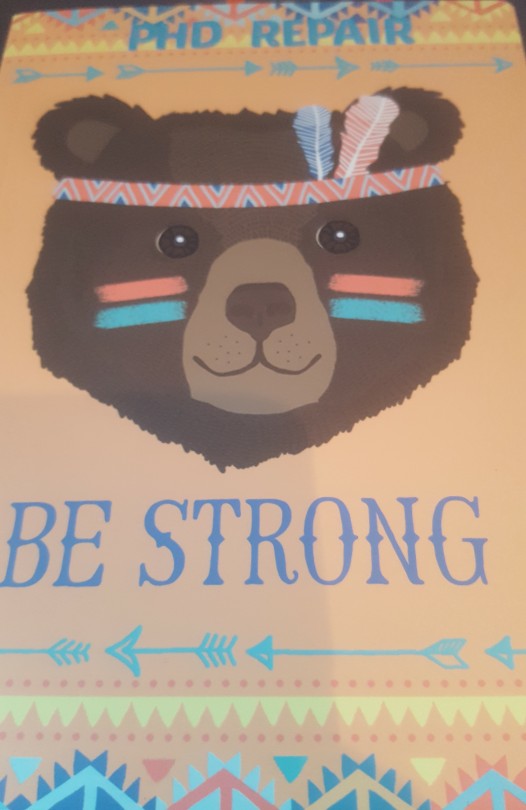 I am going to finish this PhD. But I’m sure as hell not going to enjoy it.