Last week I had the opportunity to attend the ‘Parent-child relationships past and present’ workshop in Oxford.  This was an interdisciplinary event that involved people from all sorts of backgrounds, not just talking about history!  It’s really inspiring to get out of the ‘history’ box and find out about things you’d never really known about before.  I got chatting to more people than I usually do - I knew a few people from Twitter who were going to be there, and it helps when you’ve been to a few conferences/talks because you can talk to people you’ve met before too.

There were four panels and a keynote.  The theme of the first panel was ‘nutrition’, and we were treated to two very different talks - Angela Davis on food in accounts of mother-child relationships by Jewish Holocaust survivors, and Paulina Nowicka on present-day parental and grandparental feeding of preschool children.  Despite being disparate, both papers made me think about my own research - in the case of Davis’ paper, of the use of food as a symbol in my research subjects’ descriptions of home life, and in the case of Nowicka’s paper, whether spoiling with food has always been a ‘grandparent’ thing (I’d hazard to guess it’s that from what I’ve read) or a generational thing (either because they’ve raised their children strictly and now they can relax with the grandchildren, or because people their age cook more/have more time to cook/have a lot more food available than in their day and want to take the opportunity to feed the grandchildren up accordingly).

This panel was followed by the keynote, Marc Bornstein on neuroscience, parenting and culture.  This was way outside of my disciplinary comfort zone, but I understood most of it nonetheless, and what I got from it was the importance of parental input right from the beginning of life.  Bornstein explained that there were several universal parental goals, but which of these took precedence depended on where in the world the family was, with local histories, beliefs, languages and childbearing values and practices all having an impact on this.  I was particularly struck that siblings were not mentioned, with a correlation between the mother’s sociability/promotion of social development in the child and the child’s actual social development.  I was also horrified that I involuntarily smiled at a picture of a baby - betrayed by my brain wiring!  I’m of the ‘I’ll hold it for a bit, but if it starts smelling or making a noise you can have it back!’ line of thought when it comes to babies.

The panel after lunch (which featured some bizarre sandwich-filling combinations!) had the theme of ‘fatherhood’, and again the two papers were very different, with Joanne Bailey talking about fatherhood in the late eighteenth and nineteenth centuries, and Anna Sarkadi talking about findings that children of engaged fathers have better social skills, and how these are seen as ‘controversial’.  I particularly liked Bailey’s assertion (counter to Jane Humphries) that fathers were not universally problematic in working-class autobiographies, with relationships depending on the personality of the individual father.  I can identify with that in my own research, as some of my subjects adored their dads, whereas others were less happy with them.  Sarkadi particularly interested me when she talked about how the right-wing press picked up and distorted her ideas, as well as the way female academics are described in the media compared to male academics.

The final session of the day focussed on ‘education’, with Christina de Bellaigne talking about Charlotte Mason, Janet Goodall talking about present-day parental engagement with children’s learning, and Sue Granshaw talking about the influence of parents on career choice in High Wycombe in the 1950s and ’60s.  The first of these was particularly useful to me as I’ve come across the writings of Mason in my own research, and from it I gained some great information about how far new ideas about education circulated in the nineteenth century.  What especially struck me about Goodall’s talk were the ideas that children behaved well in school for parental approval rather than teacher approval, and wanted moral support and a good attitude towards education rather than actual help with homework from their parents.  Granshaw’s talk again got me thinking about my own research, as a lot of her interviewees went into the jobs their parents told them to, middle class families encouraged their children to go into white collar jobs and girls were pointed towards ‘feminine’ jobs.  Aunts, uncles and teachers could also influence career choice, and sometimes parents/families were more of a hindrance than a help, for example by not wanting their children to go to grammar school/not knowing anything about the jobs it might lead to, not making any suggestions or not letting their children go to university due to lack of funds and a need for them to help out in the home.  All these are things I can look out for in my own research, to see whether only children also had these experiences or not so much.

I made a weekend of my trip to Oxford - one of my best friends lives there, so it was a good opportunity to stay for a few days!  I rather like it - it has most of the shops and restaurants (although even the fast ones serve slowly for some reason) I want, some great cafes and bars, and I like the architecturally grand college buildings and intellectual culture there.  However, I worry that if I was to work there, I would possibly find it too formal and pressured - I might be constantly concerned about being not ‘smart’ enough in both senses of the word.  Also, I will never cease to find it weird seeing people in gowns on a normal day, and I got lost in St Cross and ended up in the chapel (if it was Essex, it would be a corridor of offices)! 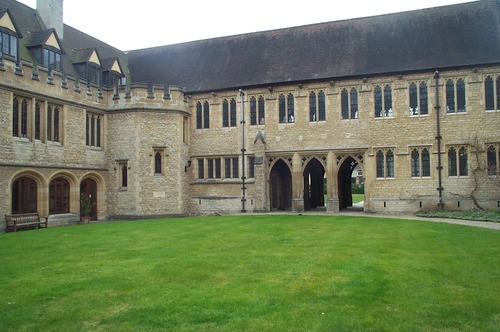