This week, I’ve spent a bit of time puzzling over putting together an abstract for a conference, where I want to talk about only children’s experiences of schooling, particularly starting school and going to boarding school, as well as the more atypical experiences of starting school late or being educated at home for long periods of time.  I already wrote about boarding school experiences a few weeks back, and today I’m going to write about a few good and bad experiences of starting school from my twentieth-century only-child autobiography collection.  This will hopefully help me with my abstract a bit without giving away too much of my talk!  The main issue I’ve had has been filling in the blanks in the sentence ‘___ and ___ have written about experiences of schooling, and I want to build on this by looking specifically about only children’s experiences.’  Either I’m overlooking a whole body of scholarship, or nobody has done substantial research on how children felt about their education.  I guess if that really is the case, I can say ‘most scholarship about history of education has focussed on policies and implementation, and while children’s experiences of school have featured in edited collections of autobiographies and oral histories.’  And maybe have an idea for a postdoc proposal.

Only children report good, bad and mixed experiences of school - a contrast to contemporary literature that characterised their experiences as almost always bad.  Sociologist and industrial historian Alan Fox (b. 1920) was used to playing with children living nearby; however:

> > 'At the grey, forbidding Board school to which I was despatched I found myself utterly unable to enter into the boisterous, extravert life of the playground.  Its aggressiveness shocked and astonished me; I had met nothing like it.  Nor could I match the sheer animal spirits.'[1] > >

Being the only child in his home, Fox was used to peace and quiet; until the age of five, his family had lived in a neighbourhood so rough that his mother would not let him mix with other children, so when he started school he had only had contact with neighbourhood children for a limited time, and unlike the extended family who liked noisier pursuits, his parents were bookworms.[2]  Fox went on to describe his first three years of schooling, before his family moved again and he changed to another school, as a time when he felt ‘bewildered and unconfident.’[3]  However, he did not solely blame these feelings on his experiences as an only child; he also put them down to his physical frailty due to having had measles, whooping cough and ‘something much more serious about which my mother subsequently was studiedly vague.’[4]

Poet James Kirkup (b. 1918) found school a similar shock to the system, and described his first experiences of it in great detail.  Starting school was a definite turning point in his young life: ‘When I started school, my singing and dancing days came to an end.’[5]  The one young friend he had made previously, his upstairs neighbour’s niece, was at a different school, so he knew nobody at the institution with the ‘big, gloomy central hall’ and ‘hideous classroom’, where his first teacher was ‘jolly’ but her loud voice frightened him.[6]  He found the other children an assault on the senses:

> > 'I detested the playtimes, for I did not like games of any kind.  The playground, filled with a swarm of shrieking, violent children was a place of terror to me.  I would try to make myself as inconspicuous as possible in the semi-darkness of the “shed,” a large open shelter at one end of the playground … for me, rain came to mean nightmares of cross, rough, bullying, ugly children kicking and punching and stealing one’s possessions.'[7] > >

The other children, and some of the teachers, were cruel to him because his quiet demeanour gave them the impression that he was stupid.[8]  The effect was that he became especially home-oriented as he drew a contrast between home, where he was happy with his kind, loving parents, and outside, which he had come to see as ‘a barbaric and unfriendly place.’[9]  Although the bullying eased off when he proved an unsatisfactory target, Kirkup never found school a pleasant place.[10]

Working-class autobiographer Wallace Brereton (b. 1919) had a much better time at school.  By the time he started school, he had already made his first best friend playing out in the street and was able to name five other boys they played with.[11]  Although his education was ‘meagre’ and he was not good at sports, he appeared to fit in easily, conforming to the playtime practice of eating a ‘lunch’ of a small packet of cold toast, and being liked enough by the teachers to become ink monitor and woodwork monitor.[12]  This was echoed when he had to change to a ‘rougher’ school for a year due to a shake-up in the local education system, and made friends easily despite his initial apprehension of what the other pupils would be like.[13]

Radio personality Irene Thomas (b. 1920) also enjoyed primary school.  Having been well-briefed by her mother on the size of the class, the length of the school day, and when she was expected to attend, she entered with confidence and wrote that ‘I loved school, except for the games in the asphalt playground.  I was a thin, timid child, and hopeless at everything except the ordinary drill.’[14]  Although it might seem that a dislike of sports was a typical only-child characteristic from these sources, one might expect an only child to dislike team games because they were unused to playing with others rather than because they had an innate physical disadvantage.  This was clearly not the case for Brereton and Thomas.  Thomas was ‘sad at leaving my junior school friends and teachers’ when she won a free place at the grammar school.[15]

One reason why nobody seems to have tackled the question of children’s thoughts about their schooling might be that their experiences were not constantly the same throughout their schooling careers.  Writer and campaigner Robert Aickman (b. 1914), for example, initially had a good experience at a Dame School, where the pupils made up their own games and there was no bullying.[16]  By contast, the next school he went to, when he was still apparently of primary age, was a private school with only seven other pupils, and while he was not bullied, he found himself disliked by many of the masters,[17] and described much of his education as a waste of time:

> > 'I suffered continuously from a feeling that was never allowed to be myself.  I was not unsuccessful in going through the motions of conformity in areas that I selected, or were absolutely forced upon me; but only my mind was involved, and I felt that my mind was capable of better things if only I could find them.’[18] > >

Social campaigner Lord John Wolfenden enjoyed school at some points but not others.  He had initially enjoyed attending a Dame School with just 8-10 children in it in Swindon, but did not have a good time when he moved to Wakefield, where the class sizes were 35 and he was teased because of his southern accent.[19]  Luckily, for reasons unknown to him he was soon transferred to the junior section of the local grammar school ahead of schedule, where ‘I spent ten years revelling (usually) in what I still believe to be one of the best kinds of education in the world,’[20] and even formed a quasi-family relationship with the headmaster and his wife and three daughters.[21]

These six examples alone illustrate a wide variety of experiences, which I hope my talk will expand upon and explain further.  And now, to write that abstract. 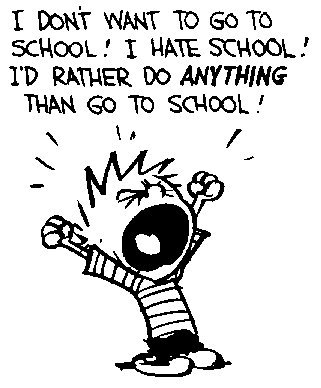