A key theme of the conference (probably because it came through that it was one of my initial big ideas for the call for papers!) was the idea of myth versus ‘reality’.  That was the angle I took with my paper about introversion and extraversion in only children, as they did not match the stereotype regarding those characteristics at all!  It also came up in Jessica Hammett’s paper, where she compared popular images of romantic relations between civil defence workers with the reality - that they did happen, but far more subtly than in cartoons, and whether or not they were tolerated depended on how disruptive they were to the functioning of the teams.  This was also a theme that came up in papers about commemoration, with Ian Kikuchi talking about how the new World War I exhibitions at the Imperial War Museum portray a different, more nuanced experience, in many ways, to that which people associate with the War, and Mary Wills discussing the difficulties of commemorating the abolition of slavery, with some groups feeling that the commemoration focusses too much on abolitionists rather than slaves themselves, and concentrates on the end of the slave trade at the expense of the abolition of slavery itself.  Perhaps the odd one out in this theme is James Southern, who showed us that the ‘myth’ of diplomats working for the British Foreign Office was actually pretty accurate - attempts to make its workers more varied (i.e. less male and privately and Oxbridge-educated) didn’t really take off.

Another big theme that stood out for me was that of **group memory.  **As the papers I heard demonstrated the size of the group who shared and transmitted memories could range from relatively small (Stephen Colledge’s family who remembered Charles I indifferently and the English Revolution postively, as in Ed Legon’s paper, and French child Holocaust survivors who campaigned for changes to commemoration, as in Rebecca Clifford’s keynote) to very large (Catholics and Protestants, who interpreted martyrdom very differently, as Nick Crown showed, and Channel Islanders, who chose to commemorate liberation by the British rather than Nazi occupation, as my co-organiser Nicolle Watkins showed).  This was interesting to me as I’m so involved with individual memory in my own work - it provided a nice contrast!

A third theme I identified was the idea that new myths and memories are being created all the time.  This came out especially in papers about the 1990s and 2000s.  Dion Georgiou spoke about how the early years of New Labour were regarded as promising at the time, hence the support of Britpop stars who sung upbeat anthems, but have since come to be viewed less positively, as the musicians and other young people were soon disillusioned by things like the New Deal and the war in Iraq.  I was really enthralled when Dion mentioned how at the end of the 90s, the anthems were replaced by slower, more mournful songs, as that’s something I semi-noticed at the time - being about 10, I didn’t really think about it that coherently.  And, of course, there’s the growth of posh, inoffensive musicians which I’ve also noticed, which has at least partly come about because fewer people can afford to be in a band as a student or on the dole any more.  Paul Stocker spoke about how the BNP re-characterised Winston Churchill in the early 2000s; nationalist groups having previously disliked him, the BNP manipulated his words and image to make themselves seem legitimate and win support.  Martina Zuliani spoke about how, in the wake of the war of Yugoslavia, the newly-formed countries made up their own national myths to foster pride and an identity among their people, as well as distinguish themselves from each other.  Jessica Douthwaite’s paper about her interviews with people who were involved with the Cold War, meanwhile, showed the reformulation of memories; each of the extracts she played and talked about featured interviewees referring - accidentally or intentionally - to the present, and in doing so betraying their thoughts about the past as well as providing some common ground to her as an interviewer.

The fourth theme that stood out of me was that of individuality and incoherence.  Both Matilda Keynes, who spoke about the work of Sven Lindqvist and how it contrasts with how history is typically taught in schools, and keynote Matt Houlbrook, who spoke about a serial fraudster who operated in the 1920s and 1930s, brought up this theme.  Matilda questioned whether history has to be taught to children as something completed, coherent and un-nuanced when it isn’t so, and Matt acknowledged that there were ambiguities and unanswered questions in his research as he traced a character who disappeared and reappeared and changed his name several times.  Both also recognised the power of individuals to make holes in myths.  This theme was particularly relevant to me as I use individuals to puncture the only-child myth, and because their experiences are all so varied, my thesis lacks that massive coherence where every piece of evidence I present in it leads to a conclusion other than ‘everyone was different’.

So, overall, it turned out to be extremely interesting with some very well-presented papers indeed, and it was also very rewarding to see all the delegates talking to each other in the breaks and at the meal, as well as lots of questions after the panels rather than awkward silences!  It’s also a lot easier to network when it’s your own conference as you have an excuse to talk to people.  I met a couple of people from Twitter, and it was a great ego boost to receive emails complimenting the conference afterwards! 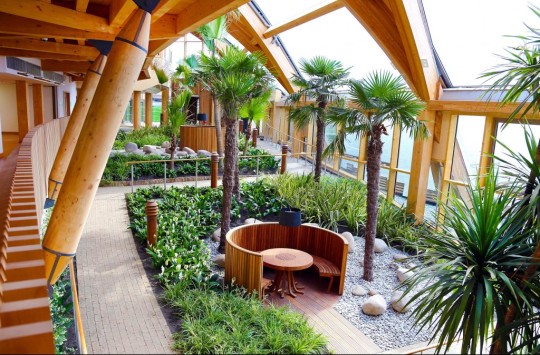 The ‘winter garden’ in the new Essex Business School building, where we held the conference.  It reminds me of the bug/fish/amphibian houses at the zoo, but that’s not a bad thing!