I confess - I’ve never read anything by Antonia White (b. 1899) or Dodie Smith (b. 1896).  I really enjoyed reading their autobiographies though - very interesting, and more differences and similarities emerging between the experiences of different only children.

Once again, the subjects’ home situations were different in some ways but not others.  Antonia (real name Eirene Botting) White was a London child who lived with both parents, while Dodie (short for Dorothy) Smith was grew up in Manchester and, following the death of her father when she was just 18 months old, lived with not only her mother, but her grandparents and a selection of aunts and uncles in a succession of large, shabby houses.  Although Smith’s family had seen a decline in fortunes, both families may be deemed middle-class and both women went to private schools accordingly; neither were boarders.  Both tried their hands at acting before becoming writers.

The two writers definitely took different views of their parents as children.  Smith remembered nothing of her father, but bestowed praise upon her mother: ‘of all the women I have ever known I liked my mother best.’[1]  She appeared to spend a lot of time with her mother; although she had a separate nursery, when she was young they shared not only a bedroom (along with an aunt) but a bed, and, after spending mornings in the company of her grandfather, she would spend the afternoons with her mother, who would read to her and fall asleep.[2]

White was more ambivalent towards her mother.  This is reflected in her embarrassment that her mother dressed an behaved eccentrically in comparison with other mothers.[3]  They did not always get along; a holiday to the countryside with relatives at the age of four which White kept talking about strained their relationship because her mother took this obsession as a criticism of home, while White’s paternal grandmother, who disapproved of her mother (interestingly, White’s father had been an only child himself) provided a sympathetic ear when White had reason to complain.[4]  White was regarded by her grandmother as a ‘good listener’ and frequently heard missives against her mother from her, though this sometimes made her feel guilty as ‘for when my mother was not being irritable or irritating I quite liked her.’[5]  White mostly saw her mother in the mornings, when they went shopping together and played games of make-believe where they possessed horses and a groom.[6]

As for her father, White was almost entirely complimentary: ‘my father compared more than favourably with other people’s fathers so I was thankful I had one parent who was not only reassuringly normal but of whom I could feel positively proud.’[7]  However, according to her ODNB profile, ‘her father, a gifted but rigid man, dominated her childhood, and she would blame him for her terrifying emotional problems.’  The reason this does not show up in her autobiography may be because it only detailed her life up to the age of six.

Life in Smith’s household sounded merry and lively.  Especially boisterous were lunchtimes, when her three young uncles would come home from work for amiable arguments about the issues of the day:

> > 'I have never known such a family for arguments as the Furbers; they argued incisively and very loudly … it was usual for at least two people to be talking at once and they all had strong voices except my mother, who could seldom make herself heard.  If I wanted to join in – as from an early age I did – she would say, ‘You’ll have to shout, darling.’  Darling shouted, and shouted so successfully that she was soon welcomed on anyone’s ‘side’.  At the age of seven I was to say to [aunt] Nan’s fiancé, ‘How dare you argue with me – an experienced arguer from Kingston House?'[8] > >

In White’s household, however, once the morning shopping had been done, her mother would disappear into the world of social calls, ‘at homes’ and bridge parties, to which her daughter was rarely invited.  She was expected spend afternoons on her own in the nursery; luckily, she found company in the servants:

> > 'There was hardly a day when, weary of my own company, I did not escape down the back-stairs, which were just outside the nursery, into the rich underworld of the kitchen.  My parents had no idea how much time I spent down in the basement, in the company of the servants and their visitors … Mr Dash [her beloved toy dog] and I would more often than not descend to the cheerful warmth of the kitchen and sometimes spend the whole afternoon there … I found their conversation fascinating, especially when they sometimes forgot my presence and discussed topics never referred to upstairs, such as murder, fatal accidents and ghosts.'[9] > >

The abovementioned Mr Dash was a prime example of White’s use of imagination as a child; he was bestowed with a fixed personality and mannerisms and ‘I looked up to him as a being older and wiser than myself with whom I could be more intimate than with any grown-up.’[10]  Such was White’s imagination that her annual holidays to a pair of great-aunts in the countryside with her grandparents were the only time it was not in use:

> > 'Perhaps the most startling difference between my Perham Road self and my Binesfield self was that the latter had no desire to impersonate imaginary characters or invent imaginary surroundings.  My real surroundings were more interesting than any I could ever invent and with so much to occupy me I felt no need to invent daydreams.  Instead of being shut up alone for hours in the nursery as I was at home, I had the garden to play in and the garden provided so many interesting things to do that there was no need to resort to make-believe to keep myself entertained.  Moreover the grown-ups took a benevolent interest in my activities and were never, like my parents too busy with their own affairs to be concerned with mine.  My grandfather was always ready to play with me, as well as to take me for walks in the fields … one of the things that made my life at Binesfield so different from my other one was that the grown-ups did so much more interesting things than my parents, and I often preferred ‘helping’ them to playing on my own.'[11] > >

Smith displayed similar tendencies, perhaps indicating that she and White both needed company of their own age as well as their future occupations.  When her mother fell asleep in the afternoons, Smith, instead of actually playing with her dolls, preferred to invent characters for them, and had difficulty sleeping because she made up stories in her head once put to bed.[12]  Like White, the distraction of visiting an interesting place with different people (in her case, the home of her cousins on her father’s side) meant ‘my imagination got a rest’, though ‘all the excitements of the Brewery and even the companionship of other children were as nothing compared with the glory of a constantly-exercised imagination.’[13]

Something unexpected that leaped out at me from both autobiographies was the existence of mixed-sex parties with ‘kissing games’ and the existence of innocent ‘sweethearts’ from a young age.  Smith detailed how she vainly wished for the attention of older boys (aged around 13 to her eight) at others’ parties, how her uncles encouraged her to invite aa number of boys to her own party, and how she unwillingly attracted the admiration of a slightly younger boy she did not like.[14]

White managed to have a ‘sweetheart’, Gérard, the nephew of one of her mother’s friends, for nine years - she was four and he was seven when they first met, and their ‘relationship’ continued until they were 13 and 16.[15]  Although they only met periodically (her father questioning why her mother did not provide girls for her to play with, and objecting to the noise made by two children playing in the nursery [16]), they were sufficiently left alone to their own devices at her house to create a private imaginary world:

> > 'Hitherto I had had to invent all my own dreams and play all the characters myself.  Now, for the first time, I had someone to share these imagined adventures; someone, moreover, with much richer powers of dramatic invention than my own.  Alone together in my nursery, Gérard and I built up a private world which we re-entered the moment the door closed behind us.'[17] > >

A particular shared daydream was that they were a married couple called Mr and Mrs John Barker, who lived above a shop.[18]

White recalled going to similar-sounding mixed parties to Smith from the age of five.  At one humiliating party, Gérard kept his distance from her because her repurposed bridesmaid’s dress of that year was an unfashionable yellow.  Her credibility was restored the following year, when she acquired an acceptable white and pink dress from another engagement as a bridesmaid.[19]

I could say much more about these sources but these were the main things that stood out to me.  I never realised such ‘puppy love’ was allowed, let alone encouraged, in Edwardian times, and it’s nice that both these only children had the opportunities to go to such parties.  It’s also interesting to see how family circumstances make so much difference - both ladies had very active imaginations, but Dodie Smith seemed to have benefitted from a livelier and more sociable home, and the title of her autobiography, Look Back With Love, suggests a really happy time in her life until her early teens, when her mother remarried and they moved to London. 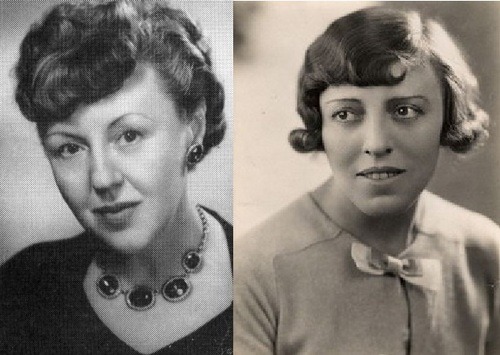