It’s funny, I thought I’d take so long to decide whether to carry on with my PhD that the decision would be made for me in that the university would get sick of me not paying for this term and kick me out. Instead, they got so sick of me not paying that they sent me a email informing me that as I’ve been alive during this term, I have to pay for it whether I drop out or not. So essentially, I’m keeping trying because I paid for this misery, and I’m going to get my money’s worth, dammit!

I’ve written about 2,000 words this morning (after getting up on a Saturday and going to the university library where I can’t just flop on my bed in despair) about the importance and contribution of my thesis, but I can’t tell if it’s any good or not, and while it’s been suggested I don’t overdo it on the ‘disproving a stereotype thing’, it’s somehow ended up all RAR HISTORIANS SO FAR HAVE BEEN FALLING BACK ON THE STEREOTYPE AND MY THESIS OUGHT TO MAKE THEM CHANGE THAT and I just can’t work out if that’s a valid contribution or not (there will be other limp reasons it contributes to knowledge when I write/think of them). At least now there are references in the introduction, so that’s a box ticked from the viva report.

I have zero belief that a) I’ve made a viable contribution to knowledge and b) my thesis itself will be good enough after these edits. I’m not even sure if I can physically finish it by the deadline in January. Well-meaning people keep saying I can do it and it’s so hard to explain that there’s not even a tiny a piece of me that truly believes I can. I’m just trying because I don’t like wasting money and I might as well as long as I don’t let it impinge on my life too much, I guess.

At least it doesn’t hurt today like it did before. It’s almost okay with a blustery ‘crashing out of academia in a blaze of fire’ attitude instead of a whiny ‘godddddddd why am I doing this I am so rubbbbbbbissssssh’ one. 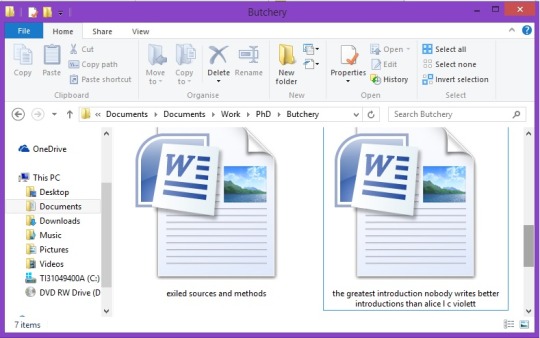