This week has mainly been about two things: preparing a conference paper I’m giving, and teaching.  I’ve also managed to squeeze in a little work on my board paper (which looks to be better than the last one, but we’ll see) but there has been no time for reading autobiographies lately - and I do hear that in the academic life, it can be hard to find time for actual research sometimes!

The conference I’m doing is the Centre for Studies of Home Postgraduate Study Day, (yes, I know my name is spelled wrong!) on the 21st October.  I’m doing a 20-minute paper about how far segregation in the home occurred in the case of upper-middle/upper class only children, with my basic argument being that it depended on their parents - some wanted their children out of the way, some had them running free all the time.  They might also make friends with the servants in the home if the servants were that way inclined.  I’ve written the paper and put a Powerpoint together and I’ve started practicing most days.  Hopefully it’ll be okay but I do worry that it’ll be boring (it’s interesting to me, but anyone else?) or too anecdotal.  Either way, it’ll be an experience, and my first conference paper outside the comfort of my own institution!

I taught my first two lessons (same lesson, different groups) this week too.  As I mentioned before, I’m teaching as part of a team, so it’s not like I’m being thrown into the deep end on my own with the students, though on the other hand that means I’m not getting that experience.  There were periods where I found myself not really doing much, but hopefully that’s because it was the first week and there was a lot of talking about the course to do - which my partner naturally knew all about so it made sense for her to say it!  The students themselves were pretty good, they needed a little prodding now and again but when we put them in groups they did talk and come up with things, which is what I was worried wouldn’t happen.  I’m actually quite looking forward to teaching again.

Aside from those, I’ve had little jobs to do - emailing students, planning things, acting on feedback - I’ve just uploaded my current chapter outline, to my Academia profile. I wrote it a couple of weeks ago but wanted to make any tweaks my supervisor suggested. I’m currently working on the section of my thesis about 20th century psychology experiments which questioned old ideas about only children - again, making amendments suggested by my supervisor so it’s all nice and shiny for my board in November. I need to get cracking on writing about nineteenth-century ideas about only children for that as well, and it seems like a really long time since I did the actual research.  So quite a lot of varied stuff going on, and I actually made a to-do list today.  A month ago my to-do list would literally have just been ‘read autobiographies’! 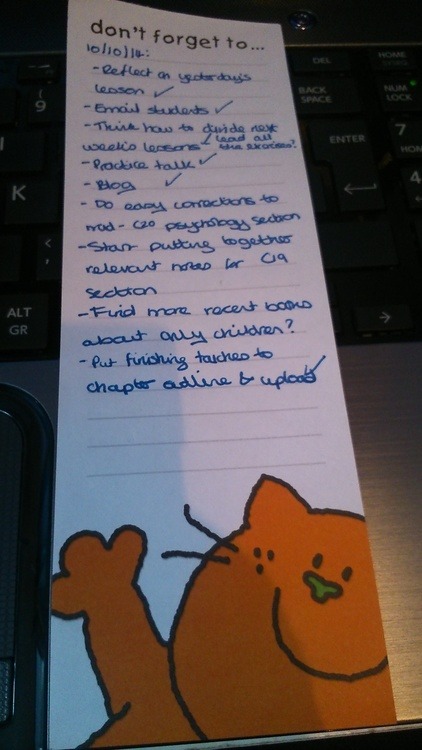