The reading of Victorians’ autobiographies so far has been a very male-centred activity.  There’s no mystery as to why - men got to do more interesting things than women, and were probably more likely to think their experiences were worth writing about, too.  This week, I got to read the autobiographies of two only-child actresses - Julia Neilson (1868-1957) and Nancy Price (1880-1970).  Despite the twelve-year age gap (and the almost identical gap between the publication of their autobiographies), it’s pretty likely that they crossed paths as they moved in the same circles, though I can’t find any conclusive evidence to back that up.  They had in common that rare thing - being allowed to continue working on the stage after marriage - and that’s probably how they amassed enough experiences to write autobiographies.

Their backgrounds were quite different; Neilson was born in London, while Price was born on an estate on the edge of Staffordshire.[1]  Neilson’s well-off parents divorced when she was very young, throwing her mother and herself into disarray for a short time.[2]  The ever-unreliable Wikipedia reports that her father died soon after this;[3] I can’t corroborate this, but she certainly didn’t mention him beyond her description of the circumstances of her birth.

Price - born Lillian Nancy Price, reverting to her middle name when she started acting - was not always an only child; she lost her five-year-old sister before the age of one, however, so would have no memories of having a sibling, and had what I would deem an ‘only-child experience’ growing up.[4]  Although she saw plenty of both parents - her father was a retired farmer who suffered from bronchial problems - she described her father as a difficult man to get to know,[5] and admitted a preference for her mother, to whom she would tell everything:[6]

> > 'She meant more to me than any human being I have ever met or shall meet.  Indeed, I doubt if any other could be found wiser, kinder, with a more generous understanding or sympathy for all kinds and conditions of people and, withal, a keen yet kindly sense of humour.'[7] > >

Both actresses talk of their extended family, though it is difficult to gauge how often they saw them.  In Neilson’s case, it might be inferred that she saw a lot of her grandparents, aunts and uncles when she was very young, on her mother’s side at least, because the two of them spent some time ‘shuttlecocking’ between relatives before her mother saved enough money to rent her house, from which she in turn sub-let rooms.[8]  Neilson did recount visits to members of her father’s family (a number of whom also went into theatre), including ‘handsome Great-Grandmother Davis’:

> > 'I can just remember Great-Grandmother Davis: a stately old lady with lace lappets descending on her bosom.  I used to be taken to see her and my two cousins, who played the piano so beautifully that out of mortification and envy I retired to sit under the table.'[9] > >

How frequent these visits were, though, is impossible to know.

Price also wrote of her extended family, though many of these she could not have seen often because they lived in Rhyl.  She offered no anecdotes of what she did with them beyond very briefly mentioning that she used to put on ‘entertainments’ with her cousin Edward[10] - again, there was no indication of how often she saw him.  She did mention frequently visiting an aunt, who eventually came to live with them following the death of her mentally ill husband:

Both women acknowledged that they might be thought of as ‘lonely’ children because they had no brothers and sisters, yet both denied that they this was truly the case.  According to Neilson:

> > 'Lacking brothers and sisters, I suppose my childhood’s days must have been lonely ones; but solitude does  not [p. 21] seem to have afflicted me with a shortage of spirits, since one of my earliest recollections is of receiving a sound smacking across my grandmother’s knee, for staying out late to play in the gardens of Torrington Square.'[12] > >

And in Price’s case:

> > 'There were some who doubtless thought I was a lonely child.  This was not true, though the fact that I had no brother or sister living probably was the cause of my seeking the companionship of hoof, pad and wing.'[13] > >

Indeed, while Neilson did not go into further details about friends she had at this time - presumably she was out playing with other children in the square - Price provided details of her multitude of childhood companions, whether young, old, animal or doll.  The head gardener’s daughter, Clara, was brought round on wet days to keep her company,[14] while another early friend, John, ‘engendered in me the spirit of emulations, wanting to be something bigger and better.  I became healthily discontented with myself, and it was he who first fostered in me ambition.’[15]  While she and Clara played more traditionally ‘feminine’ games of make-believe, with John she partook in less ‘ladylike’ pursuits such as climbing and wading.[16]  As for dolls and pets, in excerpts Price provided from her childhood diary it is sometimes quite difficult to distinguish between pet, friend and doll.[17]  She felt able to give names to and converse with dolls, but not stuffed animals because ‘human companionship I knew little about save for my father and mother, therefore dolls served their turn, but animals never.’[18]  Her elderly friends included two sisters who lived nearby, a cave-dwelling woman who might aptly be described as a witch, the novelist Baring Gould, and the local parson.[19]

Both women wrote of adults who helped their careers, but it is difficult to know how relevant to my study this is.  It is possible that, as they were writing for an audience, they felt the need to talk particularly about old hands of the stage that were known to their readers, and dwell particularly on people they had known in their careers at the expense of further details about their childhoods.  Also, those with siblings would also have likely needed and received help from such patrons.

Neither woman appears to have been overprotected by her parents.  In fact, Neilson descibed how she was sent to school in Germany at the age of 12 because of her preference for outdoor pursuits; her ‘mother thought I was running far too wild’; presumably, up until this point, she had been given the freedom to do so.[20]  Price was especially expansive on the subject of her jaunts around the countryside that surrounded her home, and acknowledges that she was allowed far more freedom than other children of the time.[21]  Her father even allowed her to tricycle around the Isle of Wight while he was sailing there, and on her she ended up picnicking with Queen Victoria![22]  This was despite concerns about her health - she was prohibited from playing the violin as a child after developing curvature of the spine from overplaying, and was laid up with measles for some time when she was eleven.[23]

The two women took opposite attitudes towards school.  For Neilson, the three and a half years she spent at boarding school in Germany ‘was one of the happiest times of my life,’ and she only visited home once during this period; she went into particular details about two Russian girls she was very friendly with.[24]  By contrast, school was a source of dread for Price, as it took her away from her home.  Regarding the day school she started aged eight, she wrote in her diary that she was ‘very frightened’; ‘all I really thought of was Mother, Tommy [horse] and Spot [dog] calling for me and getting back home’ and that the other children whispered about her.[25]  Boarding school was similarly distasteful to her; again, she dreaded going there, longed for home, and was even glad when she got measles because they delayed her return there.[26]

Both women achieved fame upon the stage despite doubts and even opposition from their parents, as well as a lack of previous family experience in the theatre.  In Neilson’s case, her mother sent her to the Royal Academy of Music, but it was a long time before she fully accepted that her daughter was not going to follow the more secure route of becoming a governess.[27]  Not only was Neilson the first member of her family to go into the theatre, but she started a trend:

> > 'Neither of my parents had been connected with the theatre, nor had I any relatives in the profession; but, as things turned out, I was to head a kind of mild family stampede towards the theatre, my beautiful cousin, Lily Hanbury, being the first to follow my example: Kerins, Jacobsons, Ellises, Rushworths – all offshoots of the Davis stock – were to have their representatives on the stage.  We were to become a 'theatrical family'.'[28] > >

As for Price, ‘I had no knowledge of any theatre, no access of any sort, and a father who emphatically said that if I ever did such a thing it would be good-bye to home – even the idea was considered disgraceful.’[29]  Nonetheless, perhaps aided by the death of her disapproving father, she moved to London - first living in digs, then in the household of General Sir Alfred Turner and his wife - and achieved her ambition.[30]

Both women spoke positively of their marriages, to husbands they met through work, and both had two children each.  Neilson’s marriage was especially companionate as her husband was fellow actor Fred Terry, and they acted and eventually went into producing together.  Price was initially reluctant to be anyone’s wife:

> > 'Our first interest in each other was engendered by a mutual admiration for Julius Caesar.  Indeed, we alternately blessed and blamed this great man, for I had intended to keep free of bonds, and Charles [Maude - also an actor] had decided that marriage was not for him; but we were led by one conqueror to a more despotic one even than he.'[31] > >

Continuing to both act and write books, and encouraging independence in her daughters, Price found marriage and motherhood a fulfilling enterprise she did not regret entering into.[32]

We have seen, then, from these two examples of women from the same profession that only-child experiences were not uniform, but there were also some points of agreement.  Neither woman was lonely, despite beliefs that they were so; they were able to find companions, whether there were other children they could play with or they had to use their imagination a little.  Neither woman was overprotected by her parents, and both were closer to their mothers than their fathers, whether due to circumstance of character.  Both went into a profession not previously entered into by members of their families; they faced doubts and opposition but ultimately overcame them, and were able to rely on contacts they made rather than existing family connections.  Both made successful companionate marriages, and had more than one child themeselves.  Their attitudes towards schooling may be put down to their personality differences; Price continually described herself as ‘shy’, whereas Neilson came across as less so.  Ultimately, these only children were independent, determined and sufficiently socially skilled to make the contacts they needed for successful careers on the stage.  Whether this applies more widely is something I hope find out as I read more and more autobiographies. 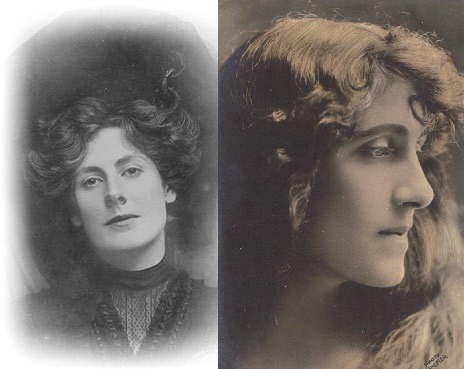